Food Facts. New Health Concerns. TAMARIND: Uses, Side Effects, Interactions and Warnings. IMPORTANT: About This Section and Other User-Generated Content on WebMD The opinions expressed in WebMD User-generated content areas like communities, reviews, ratings, or blogs are solely those of the User, who may or may not have medical or scientific training. 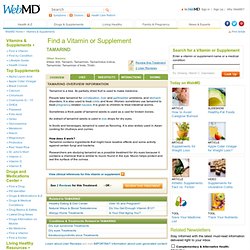 These opinions do not represent the opinions of WebMD. User-generated content areas are not reviewed by a WebMD physician or any member of the WebMD editorial staff for accuracy, balance, objectivity, or any other reason except for compliance with our Terms and Conditions. Some of these opinions may contain information about treatment or uses of drug products that have not been approved by the U.S.

Tamarind - The Calcium Pump. We all know tamarind as just a sweet and sour food used to make chutneys or added to curry preparations. 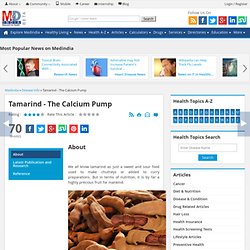 But in terms of nutrition, it is by far a highly precious fruit for mankind. Tamarind is a fruit that grows on the Tamarindus indica tree (a tropical fruit tree) in dry climates. The fruits are long and approximately 2 cm wide. The ripe fruit is filled with a sticky pulp. As the fruit pods mature, they fill out a juicy brown or reddish-brown acidulous pulp. This indigenous fruit tree grows well in semi-arid tropical harsh climatic conditions. Unlike other fruits, the amazing fact about tamarind is that it is one of the richest sources of calcium and phosphorous amongst fruits and vegetables. Due to various nutrient inhibitors present in the fruit, all of the calcium from the fruit is not available for absorption. Us08d_04. FPE454. Chapter15. Lecturer's%20handbook%20on%20Whey. Ragi Flour Nutritional Value and Benefits. Ragi is the common name of Finger Millet in Southern part of India (and known as Nachni in the northern part of India). 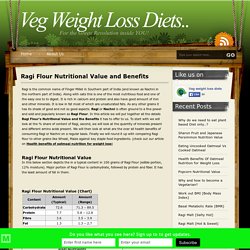 Along with oats this is one of the most nutritious food and one of the easy one to to digest. It is rich in calcium and protein and also have good amount of iron and other minerals. It is low in fat most of which are unsaturated fats. As any other grains it has its shade of good and not so good aspects. Ragi or Nachni is often ground to a fine power and sold and popularly known as Ragi Flour. Ragi Flour Nutritional Value In this below section depicts the in a typical content in 100 grams of Ragi Flour (edible portion, 12% moisture). Ragi Flour Nutritional Value (Chart) Below is the pie chart which shows the split of above numbers. Health Study: Kamut Wheat vs. Modern Wheat. March 21, 2013 Is ancient wheat healthier than modern wheat? 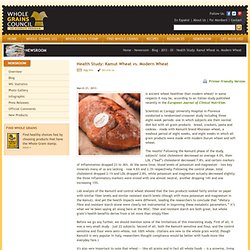 In some respects it may be, according to an Italian study published recently in the European Journal of Clinical Nutrition. Scientists at Careggi University Hospital in Florence conducted a randomized crossover study including three eight-week periods: one in which subjects ate their normal diet but with all grain products – bread, crackers, pasta and cookies – made with Kamut® brand Khorasan wheat, a washout period of eight weeks, and eight weeks in which all grain products were made with modern Durum wheat and soft wheat. The results? Following the Kamut® phase of the study, subjects’ total cholesterol decreased on average 4.0%, their LDL (“bad”) cholesterol decreased 7.8%, and certain markers of inflammation dropped 23 to 36%. Before we go any further, we should mention some of the limitations of this interesting study.

Beyond these caveats, however, the study was carefully designed. Characterization of Khorasan wheat (Kamut) a... [Eur J Clin Nutr. 2013. The Whole Grains Council. Schule Mühlenbau. Bulgur, a popular and one of the oldest foodstuffs made of wheat, even came before bread. 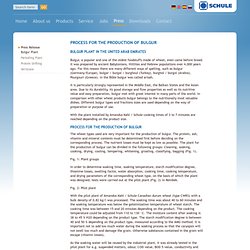 It was prepared by ancient Babylonians, Hittites and Hebrew populations over 4,000 years ago. For this reason there are many different ways of spelling, such as bulgur (Germany/Europe), bulgar / burgal / burghoul (Turkey), burghol / borgol (Arabia), Pourgouri (Greece). In the Bible bulgur was called arisah. It is particularly strongly represented in the Middle East, the Balkan States and the Asian area. Due to its durability, its good storage and flow properties as well as its nutritive value and easy preparation, bulgur met with great interest in many parts of the world. With the plant installed by Amandus Kahl / Schule cooking times of 3 to 7 minutes are reached depending on the product size. The wheat types used are very important for the production of bulgur. Fig. 1: Plant groups Fig. 2: Pilot plant Fig. 3: Building of the bulgur plant. Article: Grain Basics-Turning Wheat Berries into Bulgur. If you've read Grain Basics - Bulghur and Cracked Wheat, then you are ready for this second article - it's for the adventurous amongst us who want to make our own products as much as possible. 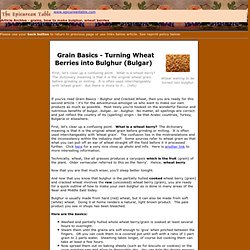 Most likely you're hooked on the wonderful flavour and nutritious benefits of bulgur...bulgar...er...bulghur. No matter, all spellings are correct and just reflect the country of its (spelling) origin - be that Arabic countries, Turkey, Bulgaria or elsewhere. First, let's clear up a confusing point. Bulgur The new old wheat. People have specialized in processing wheat, an important food source, since the Stone Age. 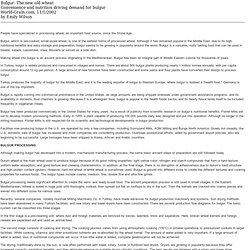 Bulgur, which is pre-cooked, small-sized wheat, is one of the earliest forms of processed wheat. Although it has remained popular in the Middle East, due to its high nutritional benefits and easy storage and preparation, bulgur seems to be growing in popularity around the world.