BLM AT SCHOOL - Home. 21 YA Books To Read For Black History Month. Young adult books go above and beyond when it comes to representation—and it’s something that we, the YA community, authors, and readers continue to fight for every day. 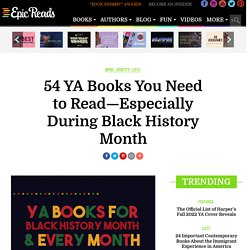 So, in honor of Black History Month, we want to take a look at some of the books that have been influential in this wave of representation and encourage you to read your way through the month! And, let’s be real: They’re all really, really good. From anthologies to graphic novels, atmospheric fantasies to realistic tales tinged by everyday issues, there’s something to offer every type of reader in every one of these stories. Start this year off strong by reading these Black History Month books—and yeah, you can thank us later! 1. Our #1 recommendation for Black History Month is already a classic. Sixteen-year-old Starr Carter moves between two worlds: the poor neighborhood where she lives and the fancy suburban prep school she attends.

Soon afterward, his death is a national headline. Buy The Hate U Give now! 2. 3. 4. 5. YA Books On The Black Teen Experience. The Crisis in Black Education: Crafting Mirrors Where Kids Can See Themselves. Sharif El-Mekki is the principal of Mastery Charter-Shoemaker Campus, a predominantly African American 7th- to 12th-grade school that was recognized by President Barack Obama as an exemplary turnaround school. 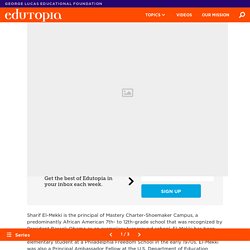 El-Mekki has been immersed in the challenge of improving black education since he was an elementary student at a Philadelphia Freedom School in the early 1970s. El-Mekki was also a Principal Ambassador Fellow at the U.S. Department of Education under Arne Duncan, and he is the founder of Black Male Educators for Social Justice, a fellowship dedicated to supporting and recruiting more African American men into the teaching profession—a critical component, El-Mekki believes, in creating more equitable schools.

We spoke with El-Mekki about his educational background, his priorities as a school leader, and how he plans to inspire more African American males to become teachers. EDUTOPIA: Can you paint a picture of your childhood and when you first became aware of race as an issue? African American Literature Blog. Jacqueline Woodson Brown Girl Dreaming Author Video. Why I write Black Children's Books: Meet African-American Children's Book Author Crystal Swain-Bates.

Jamila Lyiscott: 3 ways to speak English. Why You Should Read African-American Literature Year-Round. Black History Month is important for many reasons. It’s important because of how widespread and systematic racism is, even in 2018, and it’s important simply because black history is American history.

A fantastic way to celebrate the month is to read books written by African-American authors, though the novels don’t need to leave your to-be-read (TBR) list when March comes around. Many African-American penned stories have just as much literary merit as their canonical counterparts, but often go overlooked due to the systemic tendency to downplay the academic or artistic value of cultural commodities produced by minority figures. By choosing to read African-American literature year-round, readers are fighting the underrepresentation of black people in literature. In children’s literature, less than 8 percent of books published in 2015 were written by or about African-American people, according to a study by the Cooperative Children’s Book Center. Angie Thomas Sharon Draper.

Black History, Sequential Art, and the Power of Representation. *This post is part of our blog series on The World of the Black Panther. 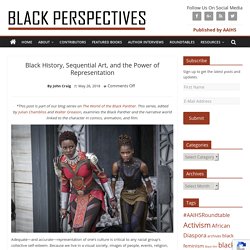 This series, edited by Julian Chambliss and Walter Greason, examines the Black Panther and the narrative world linked to the character in comics, animation, and film. Adequate—and accurate—representation of one’s culture is critical to any racial group’s collective self-esteem. Because we live in a visual society, images of people, events, religion, and places are often perceived as truth. These depictions, whether they are accurate or inaccurate, tend to define one’s reality—regardless of statistical truth. For people of African descent, it is essential that we become wise stewards of our own collective representation. Mainstream narratives in the media continue to portray Black people as void of a past—and future—they can call their own.

The Black Panther film exemplifies the power of sequential art as a literary and visual medium. Copyright © AAIHS.