I Tried Peer Support And it Helped. I Tried Peer Support And it Helped. Rise of the bromance is bad for women, could become ‘genuine lifestyle relationship’: study. The rise of the intimate “bromance” as a new form of friendship has liberated young men from the stifling bigotries of homophobia, but it imperils young women who are increasingly regarded as little more than targets of sexual attraction, according to new sociological research. 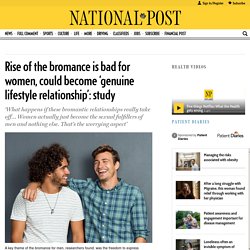 The bromance may not be the progressive expression of enlightened masculinity, as it is sometimes described and portrayed in movies, said Adam White of the University of Bedfordshire in Britain. Rather, it may be a regressive development, with especially worrying results for women. His research, based on interviews with male undergraduate students, concluded that men saw their female romantic partners as judgmental, and as “the primary regulators of their behaviour.”

The biggest threat facing middle-age men isn’t smoking or obesity. It’s loneliness. LET’S START WITH THE MOMENT I realized I was already a loser, which was just after I was more or less told that I was destined to become one. 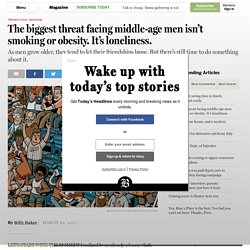 I’d been summoned to an editor’s office at the Globe Magazine with the old “We have a story we think you’d be perfect for.” This is how editors talk when they’re about to con you into doing something you don’t want to do. Advertisement. Letters II: Benefits of the shed extend far beyond the garden gates. TALK of the world being a global village is turning into reality. 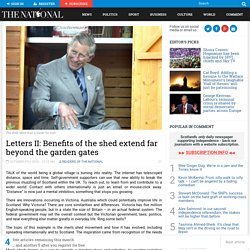 The internet has telescoped distance, space and time. Self-government supporters can use that new ability to break the previous muzzling of Scotland within the UK. To reach out, to learn from and contribute to a wider world. Resolving conflict: Men vs. women. It’s not exactly front-page news that when it comes to conflict, men and women usually behave very differently. 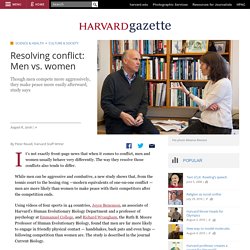 The way they resolve those conflicts also tends to differ. While men can be aggressive and combative, a new study shows that, from the tennis court to the boxing ring —modern equivalents of one-on-one conflict — men are more likely than women to make peace with their competitors after the competition ends. Using videos of four sports in 44 countries, Joyce Benenson, an associate of Harvard’s Human Evolutionary Biology Department and a professor of psychology at Emmanuel College, and Richard Wrangham, the Ruth B. Divorce stress syndrome is similar to PTSD. By Liz Lockhart With several recent high-profile marriage break-ups, the mental health implications are now hitting the headlines. 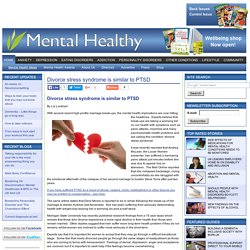 Experts believe that break-ups are taking a worrying toll on our health with symptoms such as panic attacks, insomnia and many psychosomatic health problems and are calling this condition 'divorce stress syndrome'. What if PTSD Is More Physical Than Psychological? Effects of Systemic Administration of Oxytocin on Contextual Fear Extinction in a Rat Model of Post-Traumatic Stress Disorder - Basic and Clinical Neuroscience. Bromance helps stressed out warring chimps keep their cool. Anup Shah/naturepl.com By Penny Sarchet When it comes to warfare, chimps are a bit like the ancient Greeks. 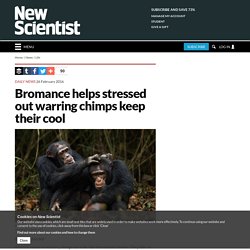 They like to head into battle with a close friend at their side – a tactic that seems to lower their stress. Many primate species, including macaques and baboons, form strong, long-lasting social bonds with particular individuals that resemble human friendship. These relationships appear to benefit both males and females: they are associated with higher reproductive success and even longer life. In male chimps these bonds can seem surprising, given that adult males are extremely aggressive, sometimes killing each other. Yet pairs of strongly bonded males also engage in relaxed, cooperative behaviours, including sharing food and grooming vulnerable, intimate areas, such as genitalia.

Advertisement Social buffer The finding suggests friendships act as a “social buffer”, protecting against the negative impact stress can have on health. Health Benefits Of Bromance: Male Friendships May Help With Stress Management By Promoting Release Of 'Cuddle Hormone' Review: Sebastian Junger’s ‘Tribe’ Examines Disbanded Brothers Returning to a Divided Country. Bonding, PTSD, and Separation. PTSD: The War Disorder That Goes Far Beyond the Battlefield. The first time I experienced what I now understand to be post-traumatic stress disorder, I was in a subway station in New York City, where I live. 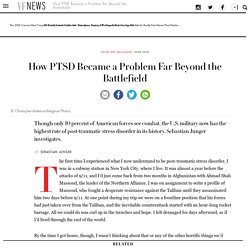 It was almost a year before the attacks of 9/11, and I’d just come back from two months in Afghanistan with Ahmad Shah Massoud, the leader of the Northern Alliance. I was on assignment to write a profile of Massoud, who fought a desperate resistance against the Taliban until they assassinated him two days before 9/11. At one point during my trip we were on a frontline position that his forces had just taken over from the Taliban, and the inevitable counterattack started with an hour-long rocket barrage.

All we could do was curl up in the trenches and hope. Sebastian Junger Tribe Book Explains a Lot. Your humble servant recently came across a report showing that Israel scores highly in surveys of human happiness. 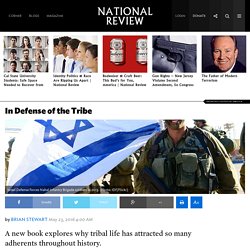 The World Happiness Report 2016 Update ranks Israel 11th in the world out of 158 countries. The Organization for Economic Cooperation and Development Life Satisfaction Index rates Israel fifth out of 36 countries — ahead of many other advanced democracies. At first blush, these data may seem unexpected, since Israel lives under the constant threat of terrorist violence. By definition, such violence does not discriminate between military and civilian targets, and strikes its victims at random. Yet it is partially because of this danger (not in spite of it) that citizens of the Jewish state exhibit remarkable degrees of personal fulfillment. Curation Tools. Men in Groups - Lionel Tiger - Google Books. Writing resources. How testosterone and oxytocin hormones interact in male work and parenting effort. Much of human behavior is influenced by hormones. 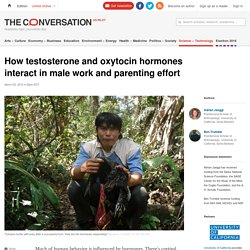 There’s cortisol, involved in our stress response and energy balance. Testosterone, a male sex hormone, tends to make men more competitive. Oxytocin has various social and physiological functions in the brain and the body, but is sometimes referred to as the “love hormone” due to its role in social bonding. These are all simplifications, but hormones do underlie many aspects of what we do and what we feel. Researchers often investigate the effects of hormones on behavior in laboratory experiments with student subjects.