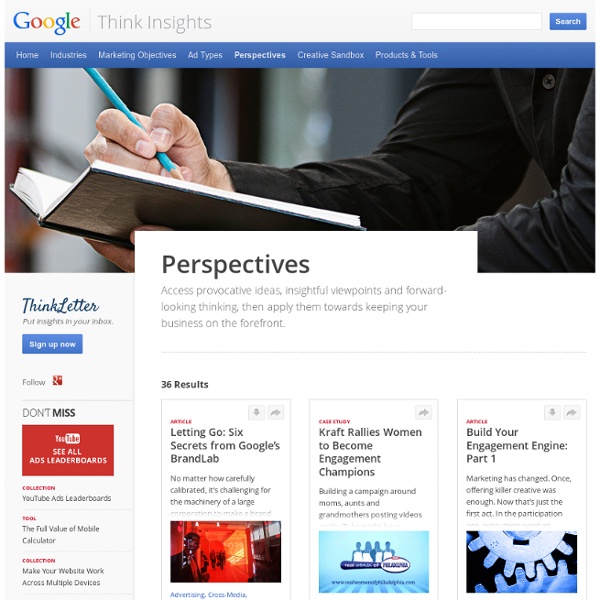 The Hivemind Singularity - Alan Jacobs In a near-future science fiction novel, human intelligence evolves into a hivemind that makes people the violent cells of a collective being. Slime mold network formation (Science). New Model Army, a 2010 novel by the English writer Adam Roberts, concerns itself with many things: the intimacy shared by soldiers at war, the motivating powers of memory and love, the rival merits of hierarchical and anarchic social structures, the legitimacy of the polity known as Great Britain, the question of European identity. Also giants. (Roberts has a history of interest in giants -- they feature prominently in his imaginative and highly excremental novel Swiftly -- and, more generally, in the scale of being: how very small, very large, and in-between-sized beings experience the world differently. This is also a theme in his recent digital-only story "Anticopernicus".)

More time means more money: the link between creativity and time To Our Faithful Current.com Users: Current's run has ended after eight exciting years on air and online. The Current TV staff has appreciated your interest, support, participation and unflagging loyalty over the years. Your contributions helped make Current.com a vibrant place for discussing thousands of interesting stories, and your continued viewership motivated us to keep innovating and find new ways to reflect the voice of the people. We now welcome the on-air and digital presence of Al Jazeera America, a new news network committed to reporting on and investigating real stories affecting the lives of everyday Americans in every corner of the country.

Working out the Left-right-left combination to a lock Conventionally, a combination lock is opened by turning the dial two turns to the right, then to the first number, one turn left, and left to the second number, and then right again to the last number. This series of turns causes the rotors of the locks to have their notches aligned with each other (see wooden combination lock model) However, there's nothing that prevents you from starting the combination counterclockwise instead of clockwise, and conventional combination locks can indeed be opened this way. The Guts of a New Machine So you can say that the iPod is innovative, but it's harder to nail down whether the key is what's inside it, the external appearance or even the way these work together. One approach is to peel your way through the thing, layer by layer. The Aura f you want to understand why a product has become an icon, you of course want to talk to the people who dreamed it up and made it. And you want to talk to the design experts and the technology pros and the professors and the gurus.

DeadSoci.al: Send Facebook Messages Long After You Die The somewhat well-worn cliché ‘there’s an app for that’ is typically voiced with a derisory tone these days, and for good reason. There really is an app for everything, and the afterlife is no different. Last year we reported on a new Facebook app that allows you to record a message that will be shared with your friends and family only when you die. If I Die lets you leave a video message and select three trustees that will be appointed to hold your message.

The best visuals to explain the Singularity to senior executives Tomorrow morning I’m doing a presentation to the top executive team of a very large organization on the next 20 years. Most of what I will cover will be general societal, business and technological drivers as well as specific strategic issues driving their business. However as part of stretching their thinking I’ll also speak a about the Singularity. As such I’ve been trying to find one good image to introduce my explanation, however I haven’t been able to find one which is quite right for the purpose. Ray Kurzweil’s Six Epochs diagram below is great and the one I’ll probably end up using, however it is a bit too over-the-top for most senior executives. The Universe becoming conscious is beyond the ambit of most strategy sessions.

Understanding & Growing Your Creative Mind Pt. 1/3 This is a very difficult and abstract topic. Even though it’s one we know well, there is no question the core aspects of this concept are difficult to grasp. Creativity is a foundational and highly celebrated part of our reality and a critical factor of many modern-day careers, passions and hobbies. Kill Your Darlings There is nothing like the moment when you suddenly come upon the answer to a design problem. Whether it is a particular interaction or the perfect design element, it is a moment of pure elation. However, in that moment, there is a always a risk of an emotional attachment being formed. Essentially, we have the potential to surrender our ability to see beyond the “perfect solution” we have just created. Arthur Quiller-Couch, a British journalist, critic, and novelist once said,"Murder your darlings." While this quote was aimed at aspiring writers, I believe that it is equally relevant to designers.

Viewpoint: Gartner on the changing nature of work 10 February 2012Last updated at 00:04 By Tom Austin Vice president, Gartner Hive mind: Working around the clock in hyper-connected 'swarms' - is this the future of work? As part of our Future of Work series running throughout February, we asked some experts to give us their take on how the way we work is going to change. Tom Austin, vice president at Gartner, has been a Gartner Fellow for a decade. He has also been chief of research at Gartner for social software, collaboration, communications, information management, business intelligence and the high-performance workplace, and is now leading an effort at defining "people-centred strategies". If you were to sit down today and create a company completely from scratch, would you copy the processes, practices and structures of today's organisations, or would you try to do something different?