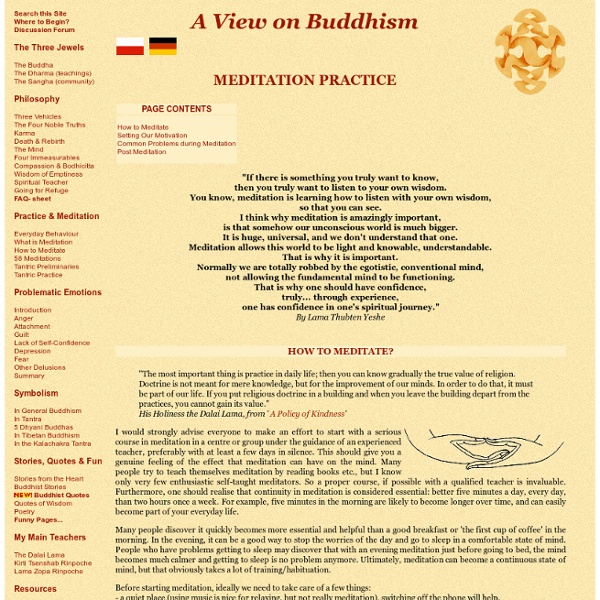 "If there is something you truly want to know, then you truly want to listen to your own wisdom. You know, meditation is learning how to listen with your own wisdom, so that you can see. I think why meditation is amazingly important, is that somehow our unconscious world is much bigger. It is huge, universal, and we don't understand that one. Meditation allows this world to be light and knowable, understandable. That is why it is important. "The most important thing is practice in daily life; then you can know gradually the true value of religion. I would strongly advise everyone to make an effort to start with a serious course in meditation in a centre or group under the guidance of an experienced teacher, preferably with at least a few days in silence. Many people discover it quickly becomes more essential and helpful than a good breakfast or 'the first cup of coffee' in the morning. The Body: - keeping the back straight, in whichever posture you meditate is most essential

How to easily convert any music to 432hz and why "If you want to understand the secrets of the universe, think in terms of energy, frequency and vibration" Nikola Tesla What do these words mean ? A vibration is a movement up and down : A frequency is the number of movements up and down per second, called hertz. Energy is the ability to move, it is what fuels the movement up and down. How to Use Meditation to Help You Out of a Depressive State By Robert L. Rupp Guest Writer for Wake Up World We live in interesting times. Transcript of Cosmic Disclosure: Awakening the Pineal Gland Subscribe and get Galactic News Daily Updates: This is a partial, not verbatim transcript.) DW: What is the pineal gland? CG: In the MILAB program, we got injections and sonic treatments focused between my eyes – the location of the pineal gland. They used an metal instrument pointed at our pineal gland and send sonic waves to that location. They said it was to enhance our intuitive part of our IE abilities.

Binaural Beats: A Meditative Gateway to Altered States of Consciousness By Polly Anne Rice Guest Writer for Wake Up World Many people struggle on their path to meditative states of consciousness, becoming downtrodden when their minds refuse to obey the orders to be silent and blank. Here’s Why You Should Consider Converting Your Music To A=432 Hz “If you want to find the secrets of the universe, think in terms of energy, frequency and vibration.” – Nikola Tesla“What we have called matter is energy, whose vibration has been so lowered as to be perceptible to the senses. There is no matter.” – Albert Einstein Tesla said it.

Expanded Consciousness: The Six Phase Guided Meditation Part of our #PurposeFairyMeditation – Saturday, here is your Six Phase Guided Meditation by the wonderful Vishen Lakhiani. This is by far one of the most beautiful and most powerful meditations ever. I did a 30 day challenge once with this meditation. Scientific Study Shows Meditators Collapsing Quantum Systems At A Distance Numerous scientists over many years have studied the role of consciousness and how it can directly influence our physical material world. Large amounts of research have been published which clearly demonstrate that yes, consciousness and what we perceive to be our physical material world are directly intertwined. I will provide more examples of this towards the end of the article, but for now we are going to take a look at one. We’ve written about it numerous times, it’s called the quantum double slit experiment, and it’s a great example of how consciousness can affect our physical material world. A paper published in the peer-reviewed journal Physics Essays explains how this experiment has been used multiple times to explore the role of consciousness in shaping the nature of physical reality.(1) In this experiment, a double-slit optical system was used to test the possible role of consciousness in the collapse of the quantum wave-function.

Mindfulness Meditation: 8 Quick Exercises That Easily Fit into Your Day You can fit these mindfulness exercises into your life while walking, brushing your teeth and just listening. Although mindfulness meditation is all the rage nowadays, most people have little time for formal practice. That’s a pity since studies have found mindfulness meditation has many benefits, including reducing depression and pain, accelerating cognition, increasing creativity, debiasing the mind and much more.