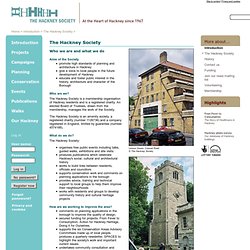 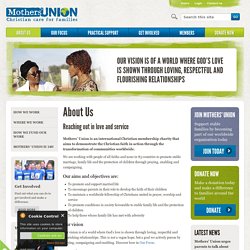 We are working with people of all faiths and none in 83 countries to promote stable marriage, family life and the protection of children through praying, enabling and campaigning. Our aims and objectives are: To promote and support married lifeTo encourage parents in their role to develop the faith of their childrenTo maintain a worldwide fellowship of Christians united in prayer, worship and serviceTo promote conditions in society favourable to stable family life and the protection of childrenTo help those whose family life has met with adversity Our vision Our vision is of a world where God’s love is shown through loving, respectful and flourishing relationships. Our values Mothers’ Union is a Christian mission organisation working with people of all faiths and none. Our membership. Museum of the Home. Join the Friends and become part of our family. 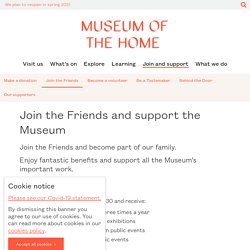 Enjoy fantastic benefits and support all the Museum’s important work. Benefits Become a Friend today for just £30 and receive: Friends updates and news three times a yearFriends previews for special exhibitionsAdvance booking for Museum public eventsSpecial rates for select public eventsAnnual Friends GatheringFree entry to Almshouse 14 with a guestDiscount in the Museum shop and café. HELM – Historic Environment Local Management. Local government have a huge role to play in the preservation and protection of our historic environment. 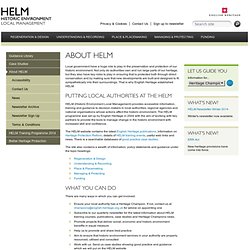 Not only do authorities own and run large parts of our heritage, but they also have key roles to play in ensuring that is protected both through direct conservation and by making sure that new developments are built and designed to fit sympathetically into their surroundings. That is why English Heritage established HELM. HELM (Historic Environment Local Management) provides accessible information, training and guidance to decision makers in local authorities, regional agencies and national organisations whose actions affect the historic environment. The HELM programme was set up by English Heritage in 2004 with the aim of working with key partners to provide the tools to manage change in the historic environment with increased skill and confidence.

Civic Voice. The Islington Society. It took a while for Britain to recover from the war and it was only in the 1960s that significant rebuilding began. 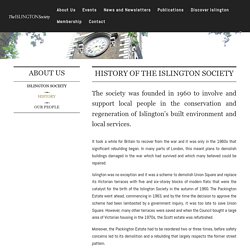 In many parts of London, this meant plans to demolish buildings damaged in the war which had survived and which many believed could be repaired. Highgate Society in the news. The leafy suburb of Highgate in north London has long enjoyed a liberal, even radical, reputation. 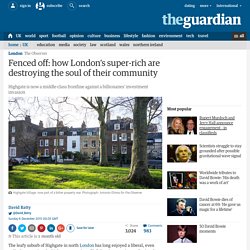 Its high concentration of left-leaning creative professionals was drawn to the area not just by large green spaces and fine views, but also by the legacy of wealthy social reformers who led campaigns from the salons of their grand mansions. But those same properties are at the centre of a growing battle between middle-class pillars of the community and a new generation of super-rich residents.

The Highgate Society says it is launching at least one appeal per month against planning applications for mega-mansions, huge extensions and iceberg basements. “It’s much more than extensions,” said architect Elspeth Clements, chairwoman of the society’s planning group. Grenfell : A Report by Architects for Social Housing. A PDF file of this report is available here: The Truth about Grenfell Tower On Thursday, 22 June, 2017, in response to the Grenfell Tower fire the previous week, Architects for Social Housing held an open meeting in the Residents Centre of Cotton Gardens estate in Lambeth. 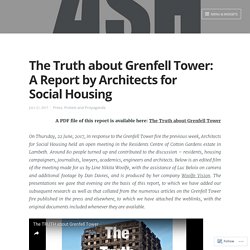 Around 80 people turned up and contributed to the discussion – residents, housing campaigners, journalists, lawyers, academics, engineers and architects. Local history & archives. Tower Hamlets Local History Library & Archives covers the area of the present-day London borough of Tower Hamlets - the original East End of London which, until 1965, comprised of the boroughs of Bethnal Green, Poplar and Stepney. 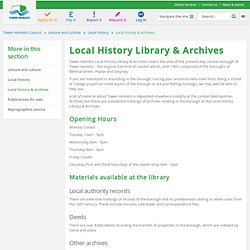 If you are interested in a building in the borough, tracing your ancestors who lived here, doing a school or college project on some aspect of the borough or are just feeling nostalgic, we may well be able to help you. A lot of material about Tower Hamlets is deposited elsewhere (notably at the London Metropolitan Archive), but there are substantial holdings of archives relating to the borough at the Local History Library & Archives. 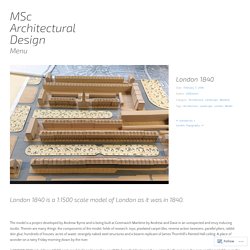 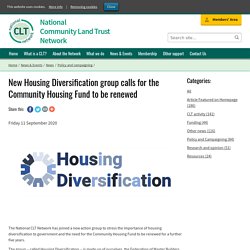 The group -- called Housing Diversification -- is made up of ourselves, the Federation of Master Builders, UK Cohousing Network and the National Custom and Self Build Association. The government’s housing ambitions cannot only rely upon volume house builders. Housing Diversification is calling on Government to deliver on its commitment to support a much wider range of routes to housing development and to boost the number of small-to-medium (SME) housebuilders who deliver them.

The group is proposing that a new, high-level Housing Diversification Taskforce be created to support greater housing diversity. Walter Birmingham. In 1964 the educationist and economist Walter Birmingham, who has died aged 91, became the warden of Toynbee Hall, a century-old settlement supported by British universities in the East End of London and dedicated to assisting disadvantaged individuals and families.

The heyday of the settlement movement, a mission by the educated middle class to set up centres of practical help in poor industrial areas, staffed by students and graduates, was over. By the 1960s Toynbee, once a beacon among settlements, lacked funds. Its Whitechapel buildings were crumbling, its educational programme largely disbanded and, in an institution where Charles Booth and William Beveridge had probed social problems, research abandoned. Walter saw how this Victorian pile could be transformed into a hub for local social work, national initiatives and international aid efforts, so he set about, with his second wife, Maisie, to identify key relations with local and national decision-makers.

Joseph Brotherton. British politician Statue of Joseph Brotherton in Salford He was born in Whittington, near Chesterfield, Derbyshire, and was the son of John Brotherton, an excise collector, and his wife Mary.[1] In 1789 the family moved to Salford, Lancashire, where John Brotherton established a cotton and silk mill.[1] Joseph received no formal education, instead joining the family firm, of which he became a partner in 1802.[1] On the death of his father in 1809 he went into partnership with his cousin William Harvey. In 1806 he married his business partner's sister, Martha.[1] Bible Christian Church In 1819, aged only thirty-six, Brotherton retired from the family business in order to devote his energy to his ministry.[1] He used his position to actively improve the conditions of workers and campaign for reforms.

A Green New Deal. Joined-up policies to solve the triple crunch of the credit crisis, climate change and high oil prices The global economy is facing a ​‘triple crunch’. It is a combination of a credit-fuelled financial crisis, accelerating climate change and soaring energy prices underpinned by an encroaching peak in oil production. These three overlapping events threaten to develop into a perfect storm, the like of which has not been seen since the Great Depression. To help prevent this from happening we are proposing a Green New Deal. Green New Deal. The Green New Deal is a powerful and popular concept that many groups and individuals are organising around. No one group ‘owns’ this idea, but we all benefit from collaborating and coordinating across our different approaches. Green New Deal UK is an independently registered non-profit organisation that campaigns for a Green New Deal in the UK. We provide an ‘organising hub’ to facilitate the efforts of ordinary people around the country who want to help campaign for change.

While we are not party-political and do not campaign for or support any one political party, we do support groups working to radically transform the policies of political parties to support a Green New Deal.