Germany's Catholic Church Just Took An Amazing Step For LGBT And Remarried Catholics. The Catholic Church in Germany is taking a stand for its remarried, lesbian, and gay employees. 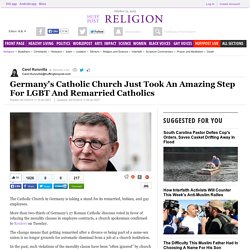 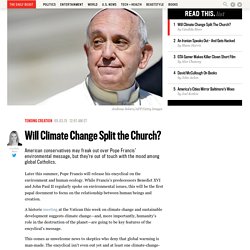 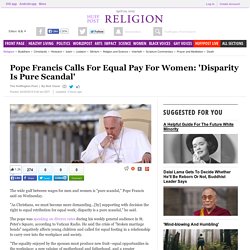 Sakena Yacoobi is the founder of the Afghan Institute of Learning, the Professor Sakena Yacoobi Private Hospital in Herat, and the Professor Sakena Yacoobi Private High Schools in Kabul and Herat, Afghanistan. The Institute provides teacher training, supports education for boys and girls, and delivers health services and education to women and children. Pope Francis Jokes About Argentine Ego, Calling Himself 'Jesus II' With President Of Ecuador. Pope Francis can crack a joke, especially when it's at his own expense. 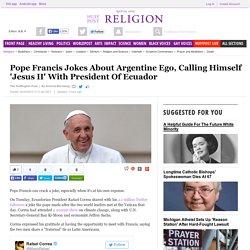 On Tuesday, Ecuadorian President Rafael Correa shared with his 2.1 million Twitter followers a joke the pope made after the two world leaders met at the Vatican that day. Correa had attended a summit there on climate change, along with U.N. Secretary-General Ban Ki-Moon and economist Jeffrey Sachs. Argentine Journalist Alfredo Leuco: Pope Francis Cold Called Me And I Almost Fainted. A journalist from Argentina is on cloud nine after Pope Francis reportedly responded to his open letter with a personal phone call. 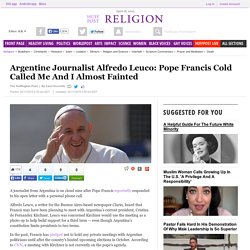 Alfredo Leuco, a writer for the Buenos Aires-based newspaper Clarin, heard that Francis may have been planning to meet with Argentina’s current president, Cristina de Fernandez Kirchner. Leuco was concerned Kirchner would use the meeting as a photo op to help build support for a third term -- even though Argentina’s constitution limits presidents to two terms. Vatican’s Secret Almsgiver Is The Pope’s ‘Soul On the Street’ Japan’s media kept quiet about the kidnapping in Syria after being asked to show concern for the lives of the hostages. 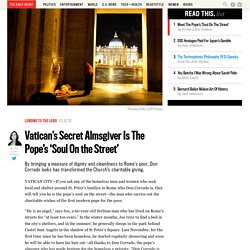 Why couldn’t their prime minister do the same? TOKYO—The Japanese government knew as early as mid-November that both Kenji Goto and Haruna Yukawa were hostages of ISIS, but its efforts to negotiate for their safe return were conducted in secret. Japan’s media were warned by the Ministry of Foreign Affairs to keep silent or risk the captives’ lives. Yet Prime Minister Shinzo Abe ignored that same explicit advice from his ministry and, in what some described as a “giddy” mood, he embarked last month on a long-planned Middle East tour. Pope Francis condemns 'barbaric violence' against Christians in Syria - Telegraph. "Particular concern arises from the fact that, owing mainly to an extremist and fundamentalist group, entire communities – especially, though not exclusively, Christians and Yazidis – have suffered and continued to suffer barbaric violence simply because of their ethnic and religious identity," the Pope said. 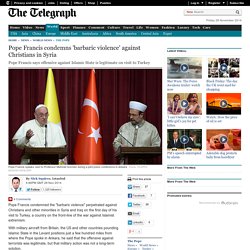 Christians had been "forcibly evicted from their homes" and seen their churches desecrated and destroyed by Islamist terrorists. "Any violence which seeks religious justification warrants the strongest condemnation," he said. The Pope flew from Rome to Ankara at the start of a delicate, three-day visit in which he will seek to balance his outspoken concern for Christians in the Middle East with the need to build bridges with Islam and to strengthen the relationship with the Orthodox Church after a schism dating back to 1054. There had been calls from some Turks for the Pope to boycott the palace, but the Vatican said he had no choice but to accept the invitation from his host.

Pope Francis Wins a Battle to Welcome Gays in the Church. The war’s not over. 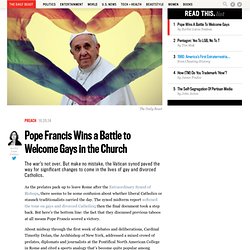 But make no mistake, the Vatican synod paved the way for significant changes to come in the lives of gay and divorced Catholics. As the prelates pack up to leave Rome after the Extraordinary Synod of Bishops, there seems to be some confusion about whether liberal Catholics or staunch traditionalists carried the day. The synod midterm report softened the tone on gays and divorced Catholics; then the final document took a step back. But here’s the bottom line: the fact that they discussed previous taboos at all means Pope Francis scored a victory. About midway through the first week of debates and deliberations, Cardinal Timothy Dolan, the Archbishop of New York, addressed a mixed crowd of prelates, diplomats and journalists at the Pontifical North American College in Rome and cited a sports analogy that’s become quite popular among Francis’s American fans. Pope Francis vs. The Warmongers. Star-studded, hilarious, and moving—Joan Rivers’ funeral was everything the star said she wanted, minus the casket and wind machine. 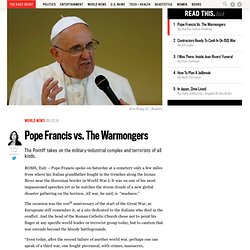 Tim Teeman was invited by her family to attend. If Joan Rivers’ memorial service at Temple Emanu-El on New York’s Upper East Side was all about tears and laughter—loud, raucous laughter as she would have loved—it was nowhere better crystallized by Broadway star Audra McDonald singing “Smile,” with the lilting heartbreak that song demands, immediately followed by Howard Stern opening his oration with the observation that: “Joan Rivers’ only problem was that she had a dry vagina.” From muted snuffling the congregation roared as one. Call Him ‘Poprah’: Pope Francis’s 10 Commandments for a Happy Life. Israel's prime minister accuses them of being as bad as al Qaeda, but he isn’t trying to run the group out of Gaza. 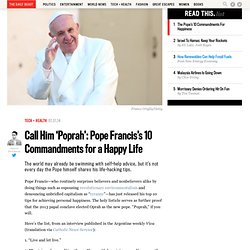 There’s a good reason why. Israeli Prime Minister Benjamin Netanyahu has said his military will not stop until it dismantles a labyrinth of tunnels often burrowed under private homes and even beneath Gaza’s mosques. But Netanyahu has not called for destroying the organization that built those tunnels: Hamas—and he won’t, multiple Israeli officials told The Daily Beast. El cauteloso viaje del Papa por Medio Oriente - BBC Mundo - Noticias. Pope: Israel-Palestinian stalemate 'unacceptable' BETHLEHEM, West Bank (AP) — Pope Francis landed Sunday in the cradle of Christianity in a symbolic nod to Palestinian aspirations for their own state, calling the stalemate in peace talks "unacceptable" and stopping briefly to pray at the Israeli separation barrier surrounding this biblical West Bank town.

Jubilant Palestinians cheered Francis on the second day of his Mideast pilgrimage as he arrived for Mass in Bethlehem's Manger Square, shouting "Viva al-Baba! " or "Long live the pope! " Giant Palestinian flags in red, white, green and black and the Vatican's yellow-and-white flags decorated the square, which is home to the Church of the Nativity, built over Jesus' traditional birth grotto. A smaller crowd waving Vatican flags also surrounded Francis as he made a brief stop en route to the square at the Israeli separation barrier surrounding three sides of Bethlehem. "I offer my home in the Vatican as a place for this encounter of prayer," he said. Pope kicks off Mideast peace summit of prayer. VATICAN CITY (AP) — Vatican officials insist no political agenda is lurking behind Pope Francis' invitation to the Israeli and Palestinian presidents to pray for peace together in the Vatican gardens, and no concrete initiatives are expected.