Pupils from elite schools still rule. Eton College is a major supplier of members of the UK power elite. 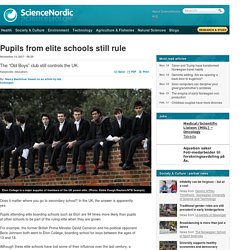 (Photo: Eddie Keogh/Reuters/NTB Scanpix) Does it matter where you go to secondary school? In the UK, the answer is apparently yes. Pupils attending elite boarding schools such as Eton are 94 times more likely than pupils at other schools to be part of the ruling elite when they are grown. For example, the former British Prime Minister David Cameron and his political opponent Boris Johnson both went to Eton College, boarding school for boys between the ages of 13 and 18. Although these elite schools have lost some of their influence over the last century, a man is much more likely to be among the ruling elite if he has attended one of these nine prestigious boys' schools: Eton, Harrow, Rugby, Westminister, Charterhouse, Merchant Taylor's, Shrewsbury, St Paul's and Winchester College.

How Norwegians made sure criminals went to Hell. During the Middle Ages, people had a clear vision of what Hell was like. 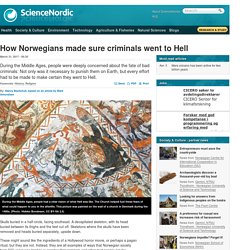 The Church helped fuel these fears of what could happen to you in the afterlife. This picture was painted on the wall of a church in Denmark during the 1400s. (Photo: Hideko Bondesen, CC BY-SA 2.5) Norwegians impolite? Forget it! ’Twas dangerous to insult a Viking. RSA Animate - The Empathic Civilisation. The Entire History Of Human Culture... In 5 Minutes. If you could compress 2,600 years of cultural history into one moment, it'd look something like this. 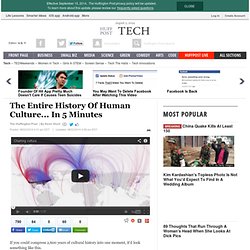 The stunning visualization created by Maximilian Schich, an art historian at the University of Texas at Dallas, depicts the birth and death locations of history's most influential people. Schich's team pulled information from Freebase, a database of historical figures. The mapping starts in 600 B.C., around the dawn of the Roman Empire, and ends in 2012. The blue dots represent birth locations, and the red dots show death locations. Over time, as migration and population booms shift around the world, the map lights up in a web of red and blue.

The graphic reveals "human mobility patterns and cultural attraction dynamics," according to the American Association for the Advancement of Science. The story of a dream turning into a totalitarian nightmare in a rural village in Chile. The Famous and the Dead: Perfumed Nostalgia or Something More? ~ Columns. Although the choice of Chanel to front her latest campaign for the iconic Chanel No.5 fragrance with the medium that originally made it famous all over the world, Marilyn Monroe, is a vast improvement over the inexplicably lame former choice of Brad Pitt reciting gibberish poetry, it still leaves something to be desired. 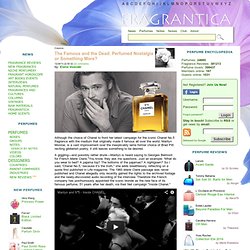 A giggling—and possibly rather drunk—Marilyn is heard saying to Georges Belmont for French Marie Claire,"You know, they ask me questions. Civilization is defined by others. (Illustration: Annica Thomsson) What does it mean to be a civilized person? 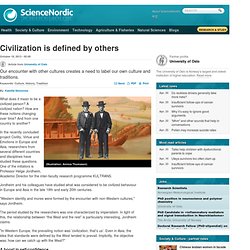 A civilized nation? How are these notions changing over time? And from one country to another? In the recently concluded project Civility, Virtue and Emotions in Europe and Asia, researchers from several different countries and disciplines have studied these questions. Jordheim and his colleagues have studied what was considered to be civilized behaviour in Europe and Asia in the late 19th and early 20th centuries. "Western identity and mores were formed by the encounter with non-Western cultures," says Jordheim. The period studied by the researchers was one characterized by imperialism. "In Western Europe, the prevailing notion was 'civilization, that’s us'. A boost in self-confidence. Media influences our attitude towards the wealthy. Five Corporation-Crushing Disruptive Technologies That Will Empower the Masses. Everyone knows we are at the mercy of huge corporations in multitude of ways. 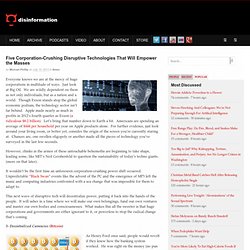 Just look at Big Oil. We are wildly dependent on them as not only individuals, but as a nation and a world. Though Exxon stands atop the global economic podium, the technology sector isn’t far behind. Maya civilization's roots may lie in ritual. Ancient Maya civilization was born of public rituals devised several thousand years ago as a result of mingling among groups spread across what’s now southern Mexico and Guatemala. 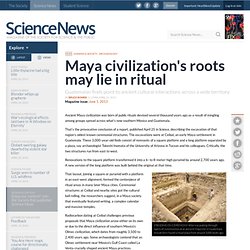 STANDING ON CEREMONY After excavating through layers of construction at an ancient Maya site in Guatemala, researchers found a ritual plaza from around 3,000 years ago. T. Inomata That’s the provocative conclusion of a report, published April 25 in Science, describing the excavation of that region’s oldest known ceremonial structures. Stone Age children helped in tool production. Norwegian guerrilla warfare in the Iron Age. A recipe for brain gain. Students’ loyalty to a region, the student town, and the university college they attend is important for regional progress. 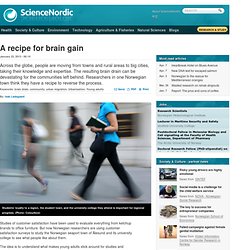 (Photo: Colourbox) Studies of customer satisfaction have been used to evaluate everything from ketchup brands to office furniture. But now Norwegian researchers are using customer satisfaction surveys to study the Norwegian seaport town of Ålesund and its university college to see what people like about them. The idea is to understand what makes young adults stick around for studies and careers. This is an important topic for a community that is desperate for human resources, and an intriguing one for anyone who has an interest in how statistics can answer complex questions about brain drain. Brain drain While only about 45 000 people live in Ålesund, the area attracts interest from big, international companies for its fishing industry, omega-3 production, and ship building.