E 84, 011130 (2011): Social consensus through the influence of committed minorities. I Totally Empathize With You ... Sometimes: Effects Of Empathy On Ethnic Group Interactions. Increased empathy toward minority group members is one way to reduce prejudice and promote more positive inter-group relationships. 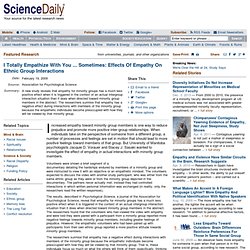 When individuals take on the perspective of someone from a different group, a number of processes and feelings are set in motion that should lead to more positive feelings toward members of that group. But University of Manitoba psychologists Jacquie D. Vorauer and Stacey J. Sasaki wanted to investigate the effect of empathy in actual interactions with minority group members. Volunteers were shown a brief segment of a documentary detailing the hardships endured by members of a minority group and were instructed to view it with an objective or an empathetic mindset. The researchers surmise that empathy has a negative effect during interactions with members of the minority group because the empathetic individuals become preoccupied with how they will be viewed by that minority group. 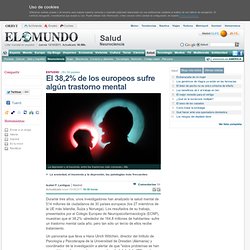 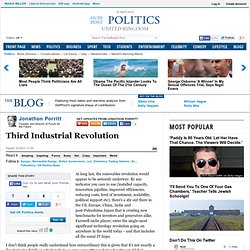 By any indicator you care to use (installed capacity, innovation pipeline, improved efficiencies, reducing costs, level of investment, scalability, political support etc), there's a stir out there in the US, Europe, China, India and post-Fukushima Japan that is creating new benchmarks for investors and generators alike. Farewell niche player; enter the single-most significant technology revolution going on anywhere in the world today - and that includes all the usual IT-hype. I don't think people really understand how extraordinary this is given that it's not exactly a "level playing field" on which today's energy competition is being fought out.

Cost of Living survey 2011 - City rankings. Although more European cities dominate the world’s top costliest locations for expatriates, according to Mercer’s latest Cost of Living Survey, several cities in Asia are among the top 10 while Luanda holds the number one position. 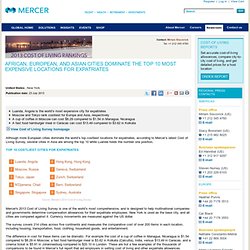 Mercer's 2013 Cost of Living Survey is one of the world’s most comprehensive, and is designed to help multinational companies and governments determine compensation allowances for their expatriate employees. New York is used as the base city, and all cities are compared against it. Currency movements are measured against the US dollar. The survey covers 214 cities across five continents and measures the comparative cost of over 200 items in each location, including housing, transportation, food, clothing, household goods, and entertainment.

The difference in cost for these items can be dramatic. Mercer produces individual cost of living and rental accommodation cost reports for each city surveyed. According to Ms. -Ends- Reporters sans frontières.

Social. Juridique. Evolution and Creativity: Why Humans Triumphed. Meme. The term ‘meme’ was coined by Richard Dawkins in his 1976 book The Selfish Gene. 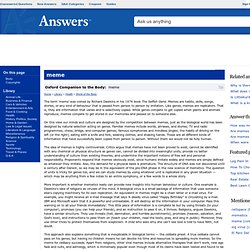 Memes are habits, skills, songs, stories, or any kind of behaviour that is passed from person to person by imitation. Like genes, memes are replicators. That is, they are information that varies and is selectively copied. While genes compete to get copied when plants and animals reproduce, memes compete to get stored in our memories and passed on to someone else. On this view our minds and culture are designed by the competition between memes, just as the biological world has been designed by natural selection acting on genes. The idea of memes is highly controversial. More important is whether memetics really can provide new insights into human behaviour or culture. This approach also explains something that is inexplicable in biological terms — the celibate priest. Of course, not all memes are viruses. Language is another important example. Human consciousness is perhaps the greatest mystery of all.

Humanity Plus: How Transhumanism Could Change the Human Race - Industry. Human technology is an incredible phenomenon. 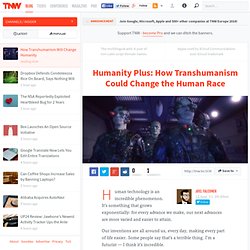 It’s something that grows exponentially: for every advance we make, our next advances are more varied and easier to attain. Our inventions are all around us, every day, making every part of life easier. Some people say that’s a terrible thing. I’m a futurist — I think it’s incredible. But hey, if you want to go back to shoveling your own waste into the ground, be my guest.

Here’s a concept that’s even more fascinating than human technology: human technology. Transhumanism, as it’s known, is the process of augmenting ourselves with advanced technology; the point where the technology isn’t merely an extension of ourselves — like your smartphone probably is — but a part of ourselves. S&#039;ouvrir à l&#039;autre : oui. A son idéologie : non.