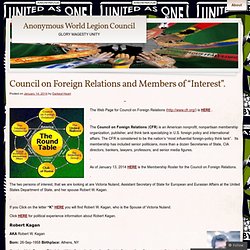 The Council on Foreign Relations (CFR) is an American nonprofit, nonpartisan membership organization, publisher, and think tank specializing in U.S. foreign policy and international affairs. The CFR is considered to be the nation’s “most influential foreign-policy think tank”. Its membership has included senior politicians, more than a dozen Secretaries of State, CIA directors, bankers, lawyers, professors, and senior media figures. As of January 13, 2014 HERE is the Membership Roster for the Council on Foreign Relations. The two persons of interest, that we are looking at are Victoria Nuland, Assistant Secretary of State for European and Eurasian Affairs at the United States Department of State, and her spouse Robert W. 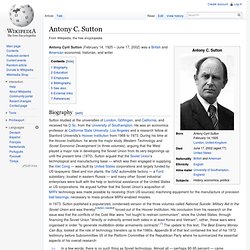 Biography[edit] Sutton studied at the universities of London, Göttingen, and California, and received his D.Sc. from the University of Southampton. He was an economics professor at California State University, Los Angeles and a research fellow at Stanford University's Hoover Institution from 1968 to 1973. During his time at the Hoover Institution, he wrote the major study Western Technology and Soviet Economic Development (in three volumes), arguing that the West played a major role in developing the Soviet Union from its very beginnings up until the present time (1970). Sutton argued that the Soviet Union's technological and manufacturing base — which was then engaged in supplying the Viet Cong — was built by United States corporations and largely funded by US taxpayers.

In his three-volume detailed account of Soviet Purchases of Western Equipment and Technology ... George W. Bush, John Kerry, test the spirit, Skull & Bones occultists and the Mausoleum they're based in at Yale University. Bonesmen | BIS | IMF | Davos | Report | TABD | Trilat | BAP | Media | Rockefeller Other Western Élites The occult Bush family 'dossier' - Hidden secrets of Tony Blair's MSWord 'dodgey dossier' revealed - Testing the spirit of truth according to the New Testament When Saddam Hussein talked of 'the devil Bush' he may not have been so far from the truth. 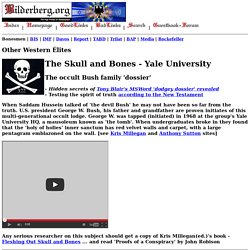 U.S. president George W. Any serious researcher on this subject should get a copy of Kris Millegan(ed.)' John Kerry (D) and George W. Adolf Hitler was obsessed with the occult, in his case the Thule Society, closely inter-connected with German Theosophists. If the Nazis' occult lodges had been exposed then shut down, not treated as a taboo, millions of lives could have been saved.

Contents The 'meditation room' where a candidate for freemasonry is left alone before being conducted to the 'Lodge' in order to be initiated into the first degree. 05May08 - In World War the devil 'has surpassed himself' - Dennis Wheatley. Intro to Skull & Bones, Antony C. Sutton. Alexandra Robbins. Alexandra Robbins (born in 1976) is a journalist, lecturer, and author. 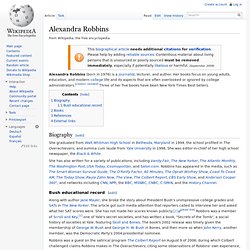 Her books focus on young adults, education, and modern college life and its aspects that are often overlooked or ignored by college administrators. [citation needed] Three of her five books have been New York Times Best Sellers. Biography[edit] Bush educational record[edit] Alleged Mater of CIA by Alexandra Robbins. The entrance of the CIA New Headquarters Building (NHB) of the George Bush Center for Intelligence. 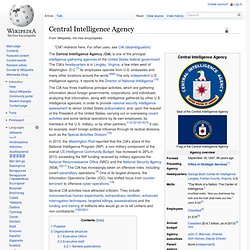 The Central Intelligence Agency (CIA) is one of the principal intelligence-gathering agencies of the United States federal government. The CIA's headquarters is in Langley, Virginia, a few miles west of Washington, D.C.[7] Its employees operate from U.S. embassies and many other locations around the world.[8][9] The only independent U.S. intelligence agency, it reports to the Director of National Intelligence.[10] Several CIA activities have attracted criticism. They include nonconsentual human experiments, extraordinary rendition, enhanced interrogation techniques, targeted killings, assassinations and the funding and training of militants who would go on to kill civilians and non-combatants.[19][20][21] Purpose According to its fiscal 2013 budget, the CIA has five priorities:[4] Organizational structure Executive Office. Alleged branch of Illuminati by Alexandra Robbins.

History The Owl of Minerva perched on a book was an emblem used by the Bavarian Illuminati in their "Minerval" degree. 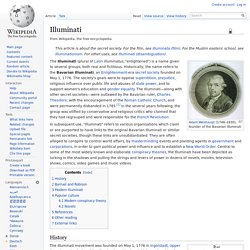 Wikipedia: Skull and Bones. History[edit] Skull and Bones was founded in 1832 after a dispute between Yale debating societies Linonia, Brothers in Unity, and the Calliopean Society over that season's Phi Beta Kappa awards. 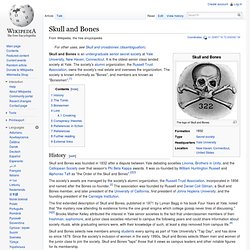 It was co-founded by William Huntington Russell and Alphonso Taft as "the Order of the Skull and Bones".[2][3] The society's assets are managed by the society's alumni organization, the Russell Trust Association, incorporated in 1856 and named after the Bones co-founder.[2] The association was founded by Russell and Daniel Coit Gilman, a Skull and Bones member, and later president of the University of California, first president of Johns Hopkins University, and the founding president of the Carnegie Institution.

The first extended description of Skull and Bones, published in 1871 by Lyman Bagg in his book Four Years at Yale, noted that "the mystery now attending its existence forms the one great enigma which college gossip never tires of discussing. NNDB: Skull and Bones Society.