Video: courts are run in at least 2 different 'modes' - one works for you and one against you... Birth Certs and Claiming the Divine Proportion. Mad World - Birth Certs and the Divine Proportion with Peter Eugene by Tír na Saor. Mad World - Death of Princess Diana (episode 001) Freeman on the Land Takes on Police & SOCPA Law! [Archive] Here's a Freeman on the Land with no mot, no number plates, no insurance and carrying an unregistered gun in his car. 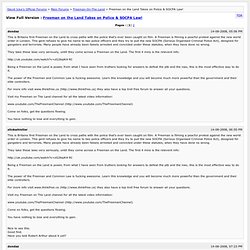 April 19 (A Date That Will Live in Infamy), 2008 I finally received tickets from two NC State Troopers for several failures to comply with North Carolina DMV statutes. On April 17, 2008, I appeared in pro per to argue my defense for case #08CR700204-200 in the Fifth District Court of North Carolina, Judge John C. Carroll presiding. The charges against me were violations of NCGS 20-111.1(1) - no registration; NCGS 20-313(A) - no proof of financial responsibility/insurance; and NCGS 20-183.8(A)(1) - no inspection sticker, two counts of each.

I had been stopped on January 19th and February 10th and charged with the same offenses. It is worthy of note that I have been traveling the public highways for over a year without any titles or other contractual documentation on my automobiles. I appeared before the District Judge on March 20, 2008, for the initial appearance hearing. 1. Did Dave Get His Car Back ? - Podcast of August 2012. Articles: Free The Planet: Denial of Consent to Register Children - UPDATED. Freemen on the land. "Freemen on the land" are a loose group of people who claim that all statute law is contractual, and that such law is applicable only if an individual consents to be governed by it. 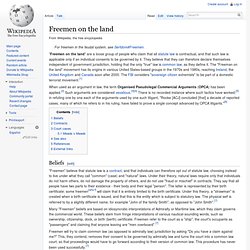 They believe that they can therefore declare themselves independent of government jurisdiction, holding that the only "true" law is common law, as they define it. The "Freeman on the land" movement has its origins in various United States-based groups in the 1970s and 1980s, reaching Ireland, the United Kingdom and Canada soon after 2000. Robert-Arthur:Menard - Fundamentals of Freedom1. Video: Bursting Bubbles of Government Deception - Robert Arthur Maynard And Think Free. We Stand For NO SYSTEM Kindom (Do No Harm Communities) is the dream for freedom, but it is the dream for the freedom of those around us who also live the dream of freedom, because it is in living for the freedom of others that we get our freedom. When we live for the dreams of Kindom of those around us, we live life as a gift because we live for (dedicate our lives to) their dream of freedom, truth, peace, joy, abundance, etc, just as they live for our Kindom dreams too.

This is true co-creation (cooperation) with no attack on the uniqueness of each of us. When we live this way, we have no need for any man-made system - everything/everyone has already been taken care of by our love for life. Just as we do not have to jump 10 feet across the room to grab our next breath, neither do we have to worry about food, water and shelter because it has all been taken care of as we each co-create Kindoms/Kin-Domains for everyone. Menard, Robert: "Bursting Bubbles of Government Deception" Beware of the "Parental Rights" IMPOSTER!!!! 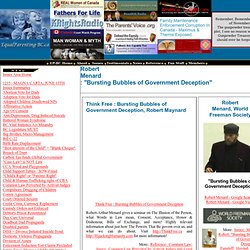 Robert Menard - Bursting Bubbles of Government Deception (Entire) Discussion about "that Freeman nonsense" That "Freeman" Nonsense by Tír Na Saor on Mixcloud Since this podcast aired I have received messages from people asking questions and continuing the discussion so I thought it would be best to start a thread to keep it all in one place. So, this thread is a place to discuss the content of the podcast and everything else to do with the Freeman/Sovereignty philosophy in openness and transparency.

The aim is to move closer to truth and further from falsehoods to arrive at stronger conclusions. It is also a place to learn so people are encouraged and should not be afraid to ask questions but please keep them on topic. Some Notes from the Podcast: In Tribal Times, there were the medicine-men. The priests. Learned in their trade and jealous of their learning, who blend technical competence with plain and fancy hocus-pocus to make themselves masters of their fellow men. For every age, a pseudo-intellectual autocracy, guarding the tricks of its trade from business, our private lives. enforce our laws. 300 Mind Expanding Documentaries!!!