Twitter. How Superheroes Helped Hollywood Rediscover The Bible - Part 1. When a raging Sun makes death and destruction imminent for his people, an infant child is hidden inside a vessel and sent far away, where he's found and raised by kind adoptive parents. 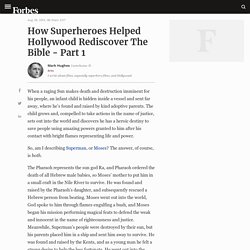 The child grows and, compelled to take actions in the name of justice, sets out into the world and discovers he has a heroic destiny to save people using amazing powers granted to him after his contact with bright flames representing life and power. What makes me tired when organising with middle class comrades. I have many middle class friends and comrades whom I adore, this post certainly isn’t directed at everyone. 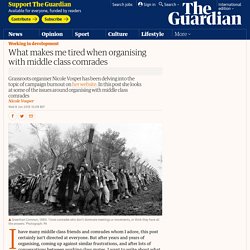 But after years and years of organising, coming up against similar frustrations, and after lots of conversations between working class mates, I want to write about what is draining about working with some middle class activists. It’s important to flag up that I’m writing this as a white, cis woman in England and I’m aware of the privilege that carries. I’m worried this piece will ignite a backlash, so I’m asking middle class folks that are triggered by this to perhaps talk to other middle class people and not email me about it. Sacked children's mental health tsar Natasha Devon: 'I was proper angry'

Were the 1970s as bad as the Tories claim? “History is written by the victors.” 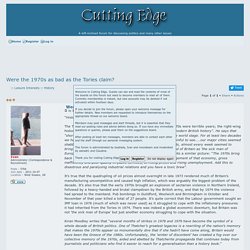 (Winston Churchill) The Tories love to tell us, as if it’s an indisputable fact, that the 1970s were terrible years; the right-wing historian Dominic Sandbrook calls them “the gloomiest decade in modern British history”. He says that “shorn of its empire, Britain now cut a very miserable figure on the world stage. For at least two decades we had been falling behind our rivals, and now the contrast was painful to see…..our major cities seemed shabby and seedy, our newspapers were full of strikes and walkouts, almost every week seemed to bring some new atrocity in Northern Ireland…..foreign papers talked of Britain as ‘the sick man of Europe’.” Tim Farron, the new leader of the Liberal Democrats, paints a similar picture: “The 1970s bring back dreadful memories of a weak economy, hopeless state management of that economy, gross inefficiency and poor quality in public services, of rising prices and rising unemployment. 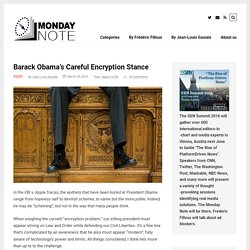 Apple fracas, the epithets that have been hurled at President Obama range from hopeless naïf to devilish schemer, to name but the more polite. Indeed, he may be “scheming”, but not in the way that many people think. When weighing the current “encryption problem,” our sitting president must appear strong on Law and Order while defending our Civil Liberties.

It’s a fine line that’s complicated by an awareness that he also must appear “modern”, fully aware of technology’s power and limits. All things considered, I think he’s more than up to to the challenge. Let’s start with a few assumptions. Our Constitutional Law President understands that encryption resides on fundamental mathematical truths that cannot be outlawed. As the computer literate Leader of The Free World knows (recall his 2008 campaign – How Obama’s Internet Campaign Changed Politics), unbreakable, open-source encryption technology is available everywhere. News bots As Appetence Engines. News bots will require a new approach to sensitive notions such as user profiling and opt-in systems. 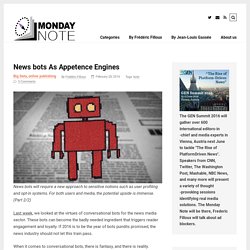 For both users and media, the potential upside is immense. (Part 2/2) Last week, we looked at the virtues of conversational bots for the news media sector. These bots can become the badly needed ingredient that triggers reader engagement and loyalty. Tesla, iPad Socialism and the Return of the Future. Over the last year much has been made of the role of technology in the realisation of a left future, but if ‘iPad socialism’ is to become more than a slogan, the UK could do worse than to look for inspiration across the Atlantic, says Aaron Bastani in this week’s NovaraWire Long Read. 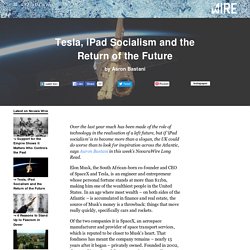 Elon Musk, the South African-born co-founder and CEO of SpaceX and Tesla, is an engineer and entrepreneur whose personal fortune stands at more than $11bn, making him one of the wealthiest people in the United States. In an age where most wealth – on both sides of the Atlantic – is accumulated in finance and real estate, the source of Musk’s money is a throwback: things that move really quickly, specifically cars and rockets. Of the two companies it is SpaceX, an aerospace manufacturer and provider of space transport services, which is reputed to be closer to Musk’s heart. That fondness has meant the company remains – nearly 15 years after it began – privately owned.

Why J K Rowling needs to buy her own national newspaper. J K Rowling attends a photocall ahead of her reading from 'The Casual Vacancy' at the Queen Elizabeth Hall. Image: Getty Fascism, class war, ethnic cleansing: for a series of kids’ books about an orphan with magical powers, Harry Potter takes in some surprisingly dark themes.