PBOG> The sociology of organisational life 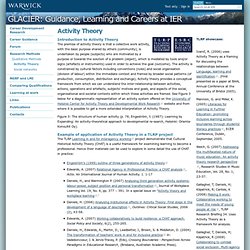 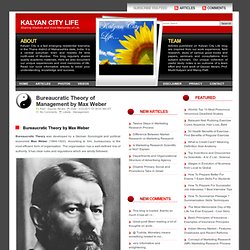 According to him, bureaucracy is the most efficient form of organisation. The organisation has a well-defined line of authority. It has clear rules and regulations which are strictly followed. Organisation and management structures. Managers are people who steer an organisation towards meeting its' objectives. 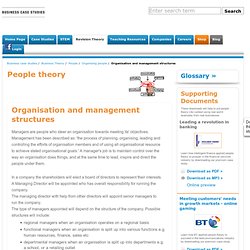 Management has been described as: 'the process of planning, organising, leading and controlling the efforts of organisation members and of using all organisational resource to achieve stated organisational goals.' A manager's job is to maintain control over the way an organisation does things, and at the same time to lead, inspire and direct the people under them. In a company the shareholders will elect a board of directors to represent their interests. A Managing Director will be appointed who has overall responsibility for running the company. The managing director with help from other directors will appoint senior managers to run the company. An Overview of Management Theory. This paper is an overview of four important areas of management theory: Frederick Taylor's Scientific Management, Elton Mayo's Hawthorne Works experiments and the human relations movement, Max Weber's idealized bureaucracy, and Henri Fayol's views on administration. 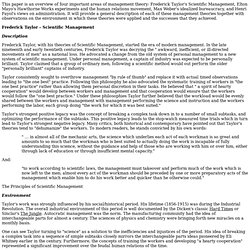 It will provide a general description of each of these management theories together with observations on the environment in which these theories were applied and the successes that they achieved. Frederick Taylor - Scientific Management Description Frederick Taylor, with his theories of Scientific Management, started the era of modern management. Ch7 Deviance and Social Control. Judicial enforcement of EU law. A judicial system whereby individuals seeking remedies before national tribunals and courts could rely upon EU law is necessary for the enforcement of EU law on employment and industrial relations. 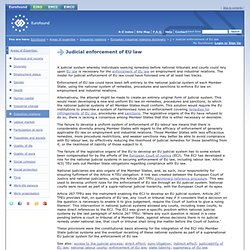 The model for judicial enforcement of EU law could have followed one of at least two tracks. Enforcement of EU law could have been left entirely to the national judicial system of each Member State, using the national system of remedies, procedures and sanctions to enforce EU law on employment and industrial relations. Alternatively, the attempt might be made to create an entirely original form of judicial system. This would mean developing a new and uniform EU law on remedies, procedures and sanctions, to which the national judicial systems of all Member States must conform. 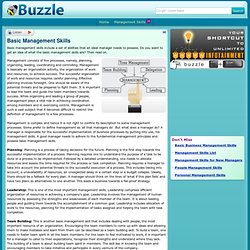 Management is basically an organization activity, the organization of work and resources, to achieve success. The successful organization of work and resources requires careful planning. Effective planning involves foresight. One should be aware of the potential threats and be prepared to fight them. It is important to lead the team and guide the team members towards success. Management is complex and hence it is not right to confine its description to some management processes. Ndition interperate compliance - Orange Web Search. Syntactical interoperability is a necessary condition for further interoperability . ndition interperate compliance - Orange Web Search ndition interperate ... www.pearltrees.com/clivelive/pbog-sociology-organisational/i... 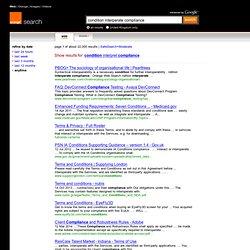 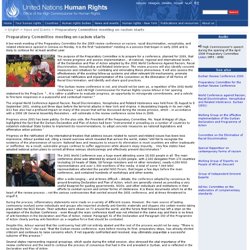 It is the first "substantive" meeting in a process that began in early 2006 and is likely to continue for at least another year. The purpose of the Preparatory Committee is to prepare for a conference, planned for 2009, that will review progress and assess implementation – at national, regional and international levels – of the Declaration and Plan of Action adopted by the 2001 World Conference Against Racism, Racial Discrimination, Xenophobia and Related Intolerance. The review process will also identify concrete measures and initiatives for combating and eliminating these phenomena. The original World Conference Against Racism, Racial Discrimination, Xenophobia and Related Intolerance was held from 31 August to 8 September 2001, ending just three days before the terrorist attacks in New York and Virginia. Collaborative Justice: Teamwork Exercise: Discussion of Roles and Responsibilities. 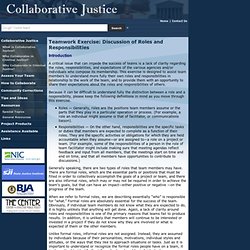 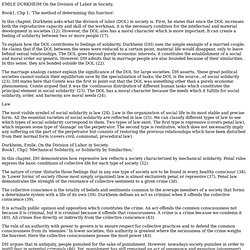 Book1, Chp 1: 'The method of determining this function' In this chapter, Durkheim asks what the division of labor (DOL) in society is. First, he states that since the DOL increases both the reproductive capacity and skill of the workman, it is the necessary condition for the intellectual and material development in societies (12).

However, the DOL also has a moral character which is more important. It can create a feeling of solidarity between two or more people (17). To explain how the DOL contributes to feelings of solidarity, Durkheim (DH) uses the simple example of a married couple. Max Weber. Karl Emil Maximilian "Max" Weber (German: [ˈmaks ˈveːbɐ]; 21 April 1864 – 14 June 1920) was a German sociologist, philosopher, and political economist whose ideas influenced social theory, social research, and the entire discipline of sociology.[3] Weber is often cited, with Émile Durkheim and Karl Marx, as among the three founding creators of sociology.[4][5][6] Weber also made a variety of other contributions in economic history, as well as economic theory and methodology.

Weber's analysis of modernity and rationalisation significantly influenced the critical theory associated with the Frankfurt School. After the First World War, Max Weber was among the founders of the liberal German Democratic Party. He also ran unsuccessfully for a seat in parliament and served as advisor to the committee that drafted the ill-fated democratic Weimar Constitution of 1919. Standards for England - The Code of Conduct. CDM Regulations and Compliance. Rationality. Determining optimality for rational behavior requires a quantifiable formulation of the problem, and making several key assumptions. When the goal or problem involves making a decision, rationality factors in how much information is available (e.g. complete or incomplete knowledge). Collectively, the formulation and background assumptions are the model within which rationality applies.

Illustrating the relativity of rationality: if one accepts a model in which benefitting oneself is optimal, then rationality is equated with behavior that is self-interested to the point of being selfish; whereas if one accepts a model in which benefiting the group is optimal, then purely selfish behavior is deemed irrational. Waste assessment. Construction - Construction Design and Management Regulations 2007. Report published on Behaviour Change. The report - the culmination of a year-long investigation into the way the Government tries to influence people’s behaviour using behaviour change interventions – finds that “nudges” used in isolation will often not be effective in changing the behaviour of the population.

Instead, a whole range of measures – including some regulatory measures – will be needed to change behaviour in a way that will make a real difference to society’s biggest problems. "There are all manner of things that the Government want us to do – lose weight, give up smoking, use the car less, give blood – but how can they get us to do them? It won’t be easy and this inquiry has shown that it certainly won't be achieved through using 'nudges', or any other sort of intervention, in isolation. Behaviour change interventions are nothing new. CarrotsSticksSermons. MINDSPACE: Influencing behaviour through public policy - Institute for Government. Update: Professor Cass Sunstein, co-author of Nudge: Improving Decisions about Health, Wealth, and Happiness, will speak at the Institute for Government on 22 March 2013. Background. MINDSPACE: influencing behaviour through public policy. Applying Behavioural Insights. The Behavioural Insights Team, often called the ‘Nudge Unit’, applies insights from academic research in behavioural economics and psychology to public policy and services.

In addition to working with almost every government department, we work with local authorities, charities, NGOs, private sector partners and foreign government, developing proposals and testing them empirically across the full spectrum of government policy. Read the team’s blog. Behaviour Change is a social enterprise that works with government, business and charity to make it easier for people to lead sustainable lives.

Behaviour at school and at work PBOG.