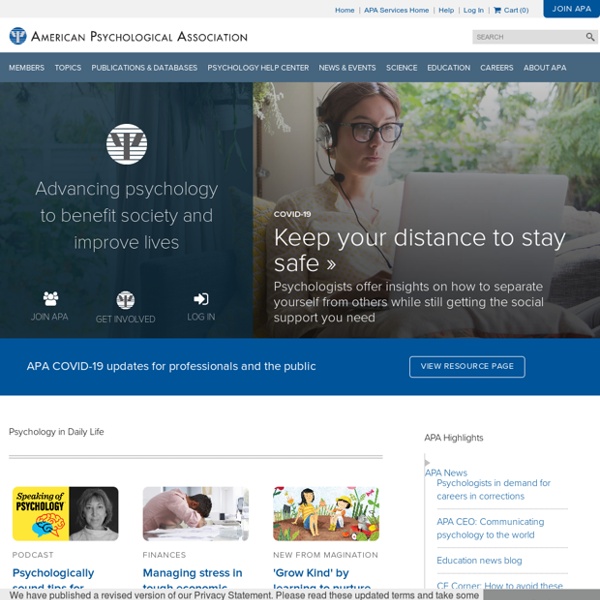 Discovering Psychology: Updated Edition 1. Past, Present, and Promise This introduction presents psychology as a science at the crossroads of many fields of knowledge, from philosophy and anthropology to biochemistry and artificial intelligence. With Dr. Mahzarin Banaji of Harvard University and Dr.

Dysthymia According to the diagnosis manual DSM-IV of 1994, dysthymia is a serious state of chronic depression, which persists for at least 2 years (1 year for children and adolescents); it is less acute and severe than major depressive disorder.[4] As dysthymia is a chronic disorder, sufferers may experience symptoms for many years before it is diagnosed, if diagnosis occurs at all. As a result, they may believe that depression is a part of their character, so they may not even discuss their symptoms with doctors, family members, or friends. Dysthymia often co-occurs with other mental disorders. The Cognitive Costs of Multitasking By Kendra Cherry Updated May 22, 2015. Quick Overview: Family structure, child outcomes and environmental mediators - Changing patterns of family structure and formation There is abundant evidence that Australian families are undergoing rapid change. The diversity of families is evident in the growth of non-traditional family structures. Family structure can be defined in terms of parents' relationships to children in the household (for example, biological or nonbiological), parents' marital status and relationship history (for example, divorced, separated, remarried), the number of parents in the family, and parents' sexual orientation. Diversification of family types

PsycPORT™: Psychology Newswire Home // News & Events // Psychology Newswire News & Events Contact APA Office of Public Affairs PsycPORT™: Psychology Newswire 24 Spot-On Illustrations That Combat Mental Health Stigma Thinkstock Seasonal Affective Disorder (SAD) is most commonly associated with winter blues, and it afflicts about 5 percent of Americans. But for less than 1 percent of those people, this form of depression strikes in the summer. Warm weather depression arises when the body experiences a “delay adjusting to new seasons,” says Alfred Lewy, MD, professor of psychiatry at Oregon Health and Science University, in Portland. Instead of waking and enjoying dawn, the body has a hard time adjusting, he says, which could be due to imbalances in brain chemistry and the hormone melatonin.

Puer Aeternus Dionysus and Eros, Naples Archeological Museum Puer aeternus is Latin for eternal boy, used in mythology to designate a child-god who is forever young; psychologically it is an older man whose emotional life has remained at an adolescent level. The puer typically leads a provisional life, due to the fear of being caught in a situation from which it might not be possible to escape. He covets independence and freedom, chafes at boundaries and limits, and tends to find any restriction intolerable.[1] The puer in mythology[edit] The puer in Jungian psychology[edit]