AI used to improve clarity of images taken in severe conditions. Traditional cameras can't always be relied on to offer a clear view of a subject, with adverse conditions such as rain, fog, or a lack of light reducing visibility. 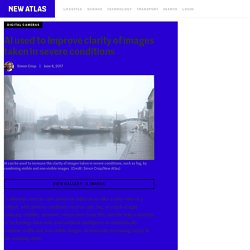 However, researchers from NEC and the Tokyo Institute of Technology have now used artificial intelligence to automatically combine visible and non-visible images, dramatically increasing clarity in the resulting shots. Non-visible images, such as those produced by things like thermal or X-ray cameras, have been used in combination with traditional photography for some time, for purposes such as monitoring situations in low light or severe weather conditions.

However, this has typically required manual processing and combining, and can easily result in aspects of the non-visible images getting overlooked. Now researchers have developed a way of using AI to automatically combine these visible and non-visible images, resulting in images with greater visibility and clarity. Source: NEC View gallery - 2 images. Voice-imitation advance means we can't trust what we see or hear anymore. Bad News: Artificial Intelligence Is Racist, Too. Robots and AI could soon have feelings, hopes and rights ... we must prepare for the reckoning. Get used to hearing a lot more about artificial intelligence. 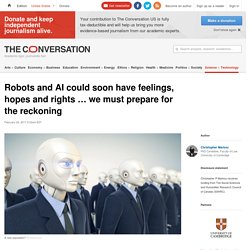 Even if you discount the utopian and dystopian hyperbole, the 21st century will broadly be defined not just by advancements in artificial intelligence, robotics, computing and cognitive neuroscience, but how we manage them. For some, the question of whether or not the human race will live to see a 22nd century turns upon this latter consideration. While forecasting the imminence of an AI-centric future remains a matter of intense debate, we will need to come to terms with it.

For now, there are many more questions than answers. It is clear, however, that the European Parliament is making inroads towards taking an AI-centric future seriously. A New Study From Google's DeepMind Shows What Happens When AI Gets Selfish. As our world becomes more and more reliant on artificial intelligence, a vital moral question crops up: if two or more AI systems end up being utilized together, will they choose to cooperate or conflict with one another? 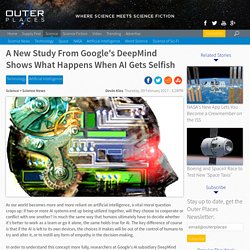 AI learns to solve quantum state of many particles at once. Art Box Images/Getty By Jennifer Ouellette The same type of artificial intelligence that mastered the ancient game of Go could help wrestle with the amazing complexity of quantum systems containing billions of particles. 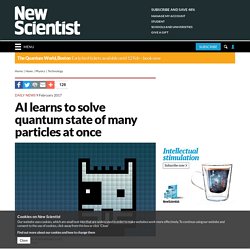 Eavesdropping AI detects the tone of conversations. MIT researchers have developed an system that makes use of a wearable device to detect whether the tone of a conversation is happy, sad or neutral. 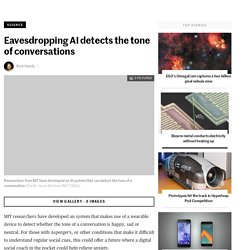 For those with Asperger's, or other conditions that make it difficult to understand regular social cues, this could offer a future where a digital social coach in the pocket could help relieve anxiety. The prototype system utilizes a Samsung Simband to collect physiological data, such as movement, heart rate, blood pressure, and skin temperature, in real time. The system also captures the audio of a given conversation to analyze the speaker's tone, pitch, energy and vocabulary, with a neural network algorithm then processing the mood of a conversation across five-second intervals.

The AI correlated long pauses and monotonous vocal patterns with sad stories and energetic, varied tones with happy stories. Google's AI Has Reinvented the Master Language. In the closing weeks of 2016, Google published an article that quietly sailed under most people’s radars. 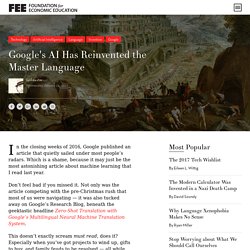 Which is a shame, because it may just be the most astonishing article about machine learning that I read last year. Don’t feel bad if you missed it. Not only was the article competing with the pre-Christmas rush that most of us were navigating — it was also tucked away on Google’s Research Blog, beneath the geektastic headline Zero-Shot Translation with Google’s Multilingual Neural Machine Translation System. IBM's Watson can now debate any topic. Watson, IBM's supercomputer made famous three years ago for beating the very best human opponents at a game of Jeopardy, now comes with an impressive new feature. 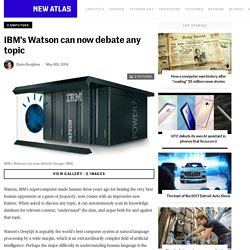 When asked to discuss any topic, it can autonomously scan its knowledge database for relevant content, "understand" the data, and argue both for and against that topic. Watson's DeepQA is arguably the world's best computer system at natural language processing by a wide margin, which is an extraordinarily complex field of artificial intelligence. Perhaps the major difficulty in understanding human language is the lack of "common sense" in today's computers. How a computer sees history after "reading" 35 million news stories.

So far, humans have relied on the written word to record what we know as history. 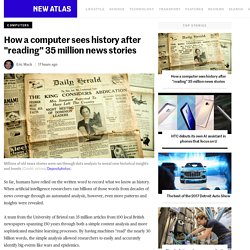 When artificial intelligence researchers ran billions of those words from decades of news coverage through an automated analysis, however, even more patterns and insights were revealed. A team from the University of Bristol ran 35 million articles from 100 local British newspapers spanning 150 years through both a simple content analysis and more sophisticated machine learning processes. By having machines "read" the nearly 30 billion words, the simple analysis allowed researchers to easily and accurately identify big events like wars and epidemics. Perhaps most interesting, the techniques also allowed the researchers to see the rise and fall of different trends during the study range from the years 1800 - 1950. Log In - New York Times. Twitch. From dinosaurs to crime scenes – how our new footprint software can bring the past to life.

A fossil footprint is one of the most evocative insights into the past. 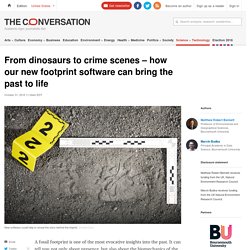 It can tell you not only about presence, but also about the biomechanics of the track-maker. Wiring the brain with artificial senses and limb control. There have been significant advances in developing new prostheses with a simple sense of touch, but researchers are looking to go further. 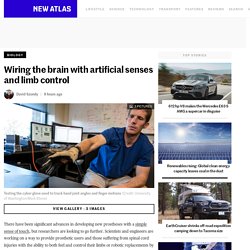 Scientists and engineers are working on a way to provide prosthetic users and those suffering from spinal cord injuries with the ability to both feel and control their limbs or robotic replacements by means of directly stimulating the cortex of the brain. For decades, a major goal of neuroscientists has been to develop new technologies to create more advanced prostheses or ways to help people who have suffered spinal cord injuries to regain the use of their limbs. Part of this has involved creating a means of sending brain signals to disconnected nerves in damaged limbs or to robotic prostheses, so they can be moved by thought, so control is simple and natural.

Sophia the Robot Will Destroy Humans and Ford Will Manufacture Driverless Cars. This is Sophia. Sophia is a robot. Sophia recently told her handler (?) That she would destroy humans. I believe her. Meet your “Doom”: Carnegie Mellon researchers deliberately violate Asimov’s First Law of robotics, teach robots to kill. 'Adam' Is A Short Sci-Fi Film That Will Make Your Jaw Drop. Here’s What Developers Are Doing with Google’s AI Brain.

An artificial intelligence engine that Google uses in many of its products, and that it made freely available last month, is now being used by others to perform some neat tricks, including translating English into Chinese, reading handwritten text, and even generating original artwork. The AI software, called TensorFlow, provides a straightforward way for users to train computers to perform tasks by feeding them large amounts of data. The software incorporates various methods for efficiently building and training simulated “deep learning” neural networks across different computer hardware. Deep learning is an extremely effective technique for training computers to recognize patterns in images or audio, enabling machines to perform with human-like competence useful tasks such as recognizing faces or objects in images.

Recently, deep learning also has shown significant promise for parsing natural language, by enabling machines to respond to spoken or written queries in meaningful ways. An MIT Algorithm Predicts the Future by Watching TV. The next time you catch your robot watching sitcoms, don’t assume it’s slacking off. It may be hard at work. TV shows and video clips can help artificially intelligent systems learn about and anticipate human interactions, according to MIT’s Computer Science and Artificial Intelligence Laboratory.

Google Just Figured Out A Futuristic Way To Slash Its Energy Bill. AI Outmaneuvers a Fighter Pilot in a Virtual Dogfight. Lisa Ventre/University of Cincinnati An artificial intelligence programmed to fly fighter jets has defeated several air combat experts in a simulation, according to a paper published in the Journal of Defense Management. The AI, called ALPHA, was built by Psibernetix, Inc. with assistance from the Air Force Research Laboratory. ALPHA's purpose was to be better than highly trained fighter pilots, and so far it appears up to the task.

The AI has gone up against its predecessor, the AFRL's previous AI program, and a series of human opponents. No pain no gain: Hurting robots so they can save themselves. Law Firm Hires First Artificially Intelligent Attorney. (ANTIMEDIA) As if the world wasn’t anxious enough about automation and artificial intelligence fleecing jobs from the working class, now even lawyers might feel a little nervous.

SARTRE autonomous road train project completed. Computer program is able to match rough sketches to real objects. Currently, using Google’s “Search by Image” function, it’s possible to search the internet for information on something if you already have an image of that thing. Sony patent describes interactive commercials on PS3. Interview with an AI (Artificial Intelligence) – A Subtle Warning… Giving smartphones emotional intelligence. Spaun, the most realistic artificial human brain yet. Ray Kurzweil Plans to Create a Mind at Google—and Have It Serve You. University of Cambridge debuts virtual talking head capable of expressing human emotions.

Review: Amazon Echo is finally available to all. Patents for technology to read people’s minds hugely increasing - News - Gadgets and Tech - The Independent. This App Wants To Change Email Forever. Everything you know is wrong.