Appeals Court Rules the Batmobile is Copyright Protected. 4 Thriving Communities That Rich People Destroyed On Purpose. Are you part of a thriving community of working-class homeowners? 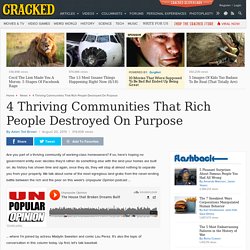 If so, here's hoping no government entity ever decides they'd rather do something else with the land your homes are built on. As history has shown time and again, once they do, they will stop at almost nothing to separate you from your property. We talk about some of the most egregious land grabs from the never-ending battle between the rich and the poor on this week's Unpopular Opinion podcast ... ... where I'm joined by actress Madylin Sweeten and comic Lou Perez. It's also the topic of conversation in this column today.

. #4. Wikipedia When the federal government sent every resident of Chavez Ravine a letter in 1949 saying they would be required to sell their homes, it wasn't a completely bad thing at first. Not everyone left, of course, and those who did received way less compensation for their homes than they deserved. Chris Hondros/Getty Images News/Getty ImagesIt fixes everything. 4 Legal Loopholes That Screw You When You're Poor. We've written before about how much being poor sucks. 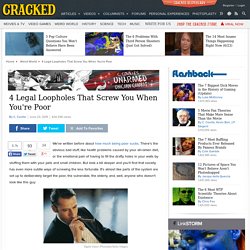 There's the obvious bad stuff, like health problems caused by your all-ramen diet, or the emotional pain of having to fill the drafty holes in your walls by stuffing them with your pets and small children. But look a bit deeper and you'll find that society has even more subtle ways of screwing the less fortunate. It's almost like parts of the system are set up to deliberately target the poor, the vulnerable, the elderly, and, well, anyone who doesn't look like this guy: Digital Vision. /Photodisc/Getty ImagesHe lit that cigar using a flame made of diamonds.

For example ... #4. You're sitting on your couch one evening, happily working on your latest 90,000-word Spider-Man fan fiction, when your phone rings. What The Shit Is Going On? Last Week Tonight with John Oliver: Chickens (HBO) The whistleblower's tale: How an accountant took on Halliburton. This story was produced in collaboration with ProPublica. 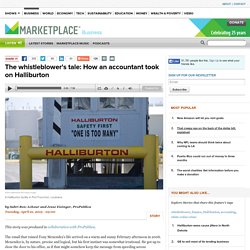 The email that ruined Tony Menendez’s life arrived on a warm and sunny February afternoon in 2006. Menendez is, by nature, precise and logical, but his first instinct was somewhat irrational. He got up to close the door to his office, as if that might somehow keep the message from speeding across cyberspace. Then he sat down at his desk to puzzle out what had just happened. The email was sent by Mark McCollum, Halliburton’s chief accounting officer, and a top-ranking executive at Halliburton, where Menendez worked. Panic gripped Menendez. Ten minutes passed, maybe fifteen. Menendez drove around for hours. “Ondy,” he cried out to her, frantic. As shocked as Menendez was, his wife had seen something like this coming. 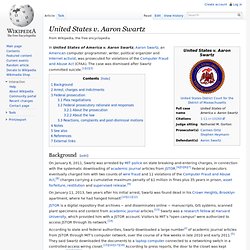 Aaron Swartz, Aaron Swartz, an American computer programmer, writer, political organizer and Internet activist, was prosecuted for violations of the Computer Fraud and Abuse Act (CFAA). The case was dismissed after Swartz committed suicide.[1][2][3] Background[edit] On January 6, 2011, Swartz was arrested by MIT police on state breaking-and-entering charges, in connection with the systematic downloading of academic journal articles from JSTOR.[4][5][6][7] Federal prosecutors eventually charged him with two counts of wire fraud and 11 violations of the Computer Fraud and Abuse Act,[8] charges carrying a cumulative maximum penalty of $1 million in fines plus 35 years in prison, asset forfeiture, restitution and supervised release.[9] On January 11, 2013, two years after his initial arrest, Swartz was found dead in his Crown Heights, Brooklyn apartment, where he had hanged himself.[10][11][12] Arrest, charges and indictments[edit] The lead prosecutor in Mr. 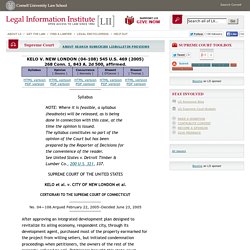 CITY OF NEW LONDON et al. No. 04—108. After approving an integrated development plan designed to revitalize its ailing economy, respondent city, through its development agent, purchased most of the property earmarked for the project from willing sellers, but initiated condemnation proceedings when petitioners, the owners of the rest of the property, refused to sell. Petitioners brought this state-court action claiming, inter alia, that the taking of their properties would violate the “public use” restriction in the Fifth Amendment’s Takings Clause. The trial court granted a permanent restraining order prohibiting the taking of the some of the properties, but denying relief as to others.

Held: The city’s proposed disposition of petitioners’ property qualifies as a “public use” within the meaning of the Takings Clause. (b) The city’s determination that the area at issue was sufficiently distressed to justify a program of economic rejuvenation is entitled to deference.