Please read and seriously consider signing this open letter as I have on:
Autonomous Weapons: an Open Letter from AI & Robotics Researchers - FLI - Future of Life Institute. Automating human brutality and death is a no-win proposition. - Jim

What’s Next for Humanity: Automation, New Morality and a ‘Global Useless Class’ Time is ‘accelerating.’ It took centuries, even thousands of years, for us to reap the rewards of decisions made by our forebears, for example, growing wheat that led to the agricultural revolution. Not anymore. “Time is accelerating,” Mr. Elon Musk and AI Experts Call to Ban Robots With a License to Kill - Futurism. Page 1 of 25512345...102030...»Last » 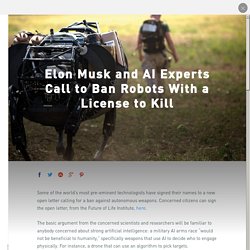 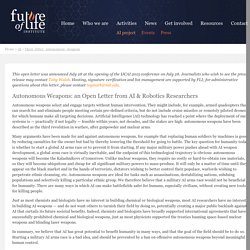 They might include, for example, armed quadcopters that can search for and eliminate people meeting certain pre-defined criteria, but do not include cruise missiles or remotely piloted drones for which humans make all targeting decisions. Artificial Intelligence (AI) technology has reached a point where the deployment of such systems is — practically if not legally — feasible within years, not decades, and the stakes are high: autonomous weapons have been described as the third revolution in warfare, after gunpowder and nuclear arms.

Many arguments have been made for and against autonomous weapons, for example that replacing human soldiers by machines is good by reducing casualties for the owner but bad by thereby lowering the threshold for going to battle. The key question for humanity today is whether to start a global AI arms race or to prevent it from starting. The 20257 Open Letter Signatories Include: Frequently Asked Questions about the Future of Artificial Intelligence.