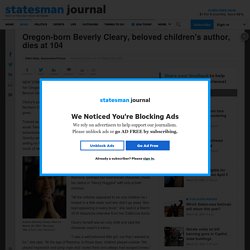 She was 104. Cleary's publisher HarperCollins announced Friday that the author died Thursday in Northern California, where she had lived since the 1960s. No cause of death was given. Trained as a librarian, Cleary didn't start writing books until her early 30s when she wrote "Henry Huggins," published in 1950. Random Name Generator. From 'Avatar' to 'Jurassic Park,' 'Beowulf' to 'Jaws,' All Stories Are the Same. A Beginner's Guide to Different Types of Poems. The art of losing isn’t hard to master;so many things seem filled with the intentto be lost that their loss is no disaster. 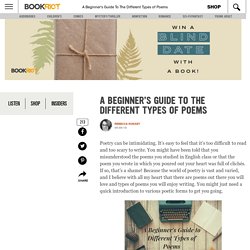 Lose something every day. Accept the flusterof lost door keys, the hour badly spent.The art of losing isn’t hard to master. Then practice losing farther, losing faster:places, and names, and where it was you meantto travel. None of these will bring disaster. I lost my mother’s watch. I lost two cities, lovely ones. Storied Adventures. 7 Ways Kurt Vonnegut Poisoned Readers’ Minds with Humanity. Kurt Vonnegut once said he wanted his novels to “catch people before they become generals and Senators and Presidents,” to “poison their minds with humanity. 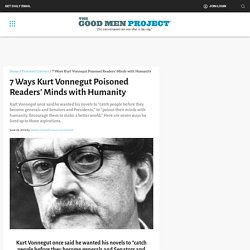 Encourage them to make a better world.” Here are seven ways he lived up to those aspirations. In an obituary for writer Kurt Vonnegut published in the Los Angeles Times, Elaine Woo called Vonnegut “an American original, often compared to Mark Twain for a vision that combined social criticism, wildly black humor and a call to basic human decency.” The Real Reason Fans Hate the Last Season of Game of Thrones. Game of Thrones, in its eighth and final season, is as big as television gets these days. 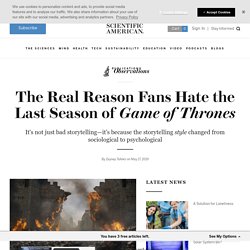 More than 17 million people watched the season’s opening. Judging by the fan and critic reaction though, it seems that a substantial portion of those millions are loathing the season. Indeed, most of the reviews and fan discussions seem to be pondering where the acclaimed series went wrong, with many theories on exactly why it went downhill.

Fascinating Chart Details The History of the Alphabet. Most of us use the letters of the alphabet everyday, but did you ever stop to wonder how their shapes came to be? The history of the alphabet is fascinating, and each of the 26 letters has its own unique story. Matt Baker (of UsefulCharts) has designed a handy poster that documents the evolution of our familiar alphabet from its ancient Egyptian Proto-Sinaitic roots (c. 1750 BCE) up to present day Latin script. The limited edition Evolution of the Alphabet chart shows how early shapes and symbols eventually morphed to become the ABCs we know today. The Encyclopedia of Science Fiction.

Le Guin: Art, Information, Theft, and Confusion, Part 2. Continued from Part One i. 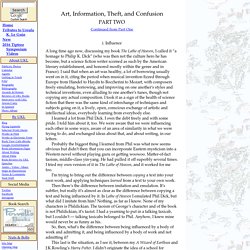 Influence A long time ago now, discussing my book The Lathe of Heaven, I called it “a homage to Philip K. Dick” (who was then not the culture hero he has become, but a science fiction writer scorned as such by the American literary establishment, and honored mostly within the genre and in France). E Welty on Writing etc 2 clicks. To be human is to unfold in time but remain discontinuous. 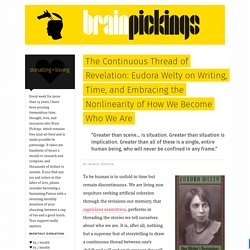 We are living non sequiturs seeking artificial cohesion through the revisions our memory, that capricious seamstress, performs in threading the stories we tell ourselves about who we are. 50 Questions To Help Students Think About What They Think - TeachThought. Contributed by Lisa Chesser Using the right questions creates powerful, sometimes multiple answers and discussions. 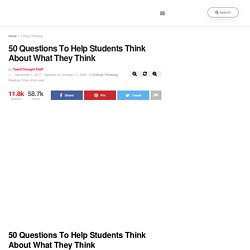 Aristotle said that he asked questions in response to other people’s views, while Socrates focused on disciplined questioning to get to the truth of the matter. Ultimately questions spark imagination, conjure emotions, and create more questions. The questions asked by a teacher or professor are sometimes more glaringly valuable than the information transferred to the students. Those questions spark a thought, which leads to a fiercely independent search for information.

A-helpful-chart-of-facial-expressions. Paris Review - Grace Paley, The Art of Fiction No. 131. Eight Lessons Kazuo Ishiguro, This Year’s Winner of the Nobel Prize in Literature, Can Teach Us… The Six Main Stories, As Identified by a Computer - The Atlantic.

“My prettiest contribution to my culture,” the writer Kurt Vonnegut mused in his 1981 autobiography Palm Sunday, “was a master’s thesis in anthropology which was rejected by the University of Chicago a long time ago.” 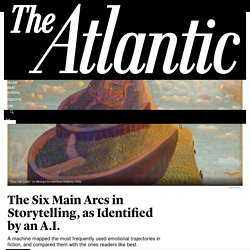 11 Fascinating Facts About ‘Goodnight Moon’ Goodnight Moon, a deceptively simple children’s book that falls somewhere between a going-to-sleep narrative and a lullaby, will turn 68 later this year—and yet it remains one of the most universal cultural references even all these decades later. 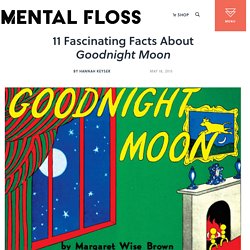 Here are a few things you might not have known about Margaret Wise Brown's sparse classic. Writing for Visual Thinkers: Narrative Structures. Voyage to the Otherworld: A New Eulogy for Ray Bradbury. 6 Easy Steps to Unforgettable Characters. By Laurence MacNaughton, @LMacNaughton Part of the How They Do It Series (Contributing Author) Readers will pick up your book because of the concept, but they’ll keep reading because of the characters. 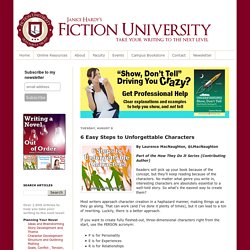 No matter what genre you write in, interesting characters are absolutely essential to a well-told story. Literature Needs Angry Female Heroes – Electric Literature. The Craft of Character Development. Aimie K. Runyan As an author of historical fiction, my work must—almost by definition—begin with a concept. Iraqi Refugee Empowers Youth To Share Their Stories With 'Narratio' When Ahmed Badr was 8 years old, his family fled Baghdad in the midst of the Iraq War. Writing helped him process his experience, so he started the website Narratio to give other young people the same opportunity. Ariel Edelman hide caption toggle caption. Neil Gaiman’s 8 Rules of Writing. 10 books that will make you a better writer (and why) Last week, I wrote about 25 habits that will make you a better writer. This week, I thought — let’s dive into books. After twenty-plus years writing, I’ve collected some resources that I absolutely couldn’t do with out.

I love borrowing books. But there are some books that a writer really should have in their own personal for-keeps libraries. Writing Fiction: 8 Wily Tips for Setting – The Writing Cooperative. Kids explain how banned and challenged books helped them and even saved their lives / Boing Boing. General Writing Tips. Data Mining Novels Reveals the Six Basic Emotional Arcs of Storytelling. Common Mistakes and Confusing Words in English. How to Write with Style: Kurt Vonnegut’s 8 Keys to the Power of the Written Word. Kurt Vonnegut: A Complete Rundown on Style. Daily Writing Tips. English Adjectives for Describing Physical Appearance - Vocabulary for Talking About How People Look.

There's a Word for That: 25 Expressions You Should Have in Your Vocabulary. Recently I came across this amazing little Tumblr named ‘OtherWordly‘ – itself a play on words. Using Evernote. Michel Foucault: “What is an Author?” Short stories. Philosopher's Stone. Setting: Using Scene To Enrich Your Writing. In both fiction and nonfiction, the setting is the general background against which your story takes place—the physical location and time period, both of which influence your characters and plot.

102 Resources for Fiction Writing « Here to Create. UPDATE 1/10: Dead links removed, new links added, as well as Revision and Tools and Software sections. 6 Ways to Create Riveting Conflict in Your Story. 100 Useful Web Tools for Writers. Odyssey.js. How to Cite Sources & Not Steal People's Content on the Internet.

Synonyms for the 96 most commonly used words in English. Make Your Dialogue More Organic. Common Words That You Should Replace in Your Writing. Important Infrequently Used Words To Know. 102 Resources for Fiction Writing « Here to Create. 6 Ways to Create Riveting Conflict in Your Story. Globe Genie. World-building. Always innovative Toronto Public Library lets us check out humans as well as books. World-building. Famous Advice on Writing: The Collected Wisdom of Great Writers. 21 Harsh But Eye-Opening Writing Tips From Great Authors. Top 10 first lines in children's and teen books. Joseph Campbell. Alan Rickman on stories. Hedonometer. How To Make An Audience Care About Your Characters by John Truby. The #1 Most Important Element In Developing Character by John Truby. 25 Things You Should Know About Storytelling.

Famous Advice on Writing: The Collected Wisdom of Great Writers. Ten rules for writing fiction. 6 Ways to Hook Your Readers. TEN SIMPLE KEYS TO PLOT STRUCTURE. Cliches: Avoid Them Like the Plague. How To Write A Novel Using The Snowflake Method. Links for Aspiring Writers.

6 Ways to Make Sure Your Reader’s Brain Syncs with Your Protagonist’s Brain. Synonyms for the 96 most commonly used words in English. Dictionaries. How Walking Fosters Creativity: Stanford Researchers Confirm What Philosophers and Writers Have Always Known. What makes a hero? - Matthew Winkler. 117 Most beautiful words in the English language. Important Infrequently Used Words To Know. List of French words and phrases used by English speakers. Kurt Vonnegut’s 8 Tips on How to Write a Great Story. The power of a great introduction - Carolyn Mohr. Three anti-social skills to improve your writing - Nadia Kalman. The Idiom Connection. Color Words.

10 top writing tips and the psychology behind them. Book genres A-Z. The Top 10 Elements of Setting In a Story. 101 of the Best Fiction Writing Tips, Part I. 6 Ways to Make Sure Your Reader’s Brain Syncs with Your Protagonist’s Brain. Connecting Your Characters to Settings in Your Novel. Creating memorable fictional characters UWA Extension. Get Me Writing » 5 Interactive Fiction Authoring Tools. The Best 100 Closing Lines From Books.

Related:  Gender   -  COLLECTION: Blogs   -  Poetry- ALL   -  Culturally Responsive Teaching   -  Promoção da Leitura   -  ecopsychology   -  Thoughts & Opinions   -  Storied Adventures   -  Ecology, Landscape, Terrority   -  Random Name Generator   -  From 'Avatar' to 'Jurassic Park,' 'Beowulf' to 'Jaws,' All Stories Are the Same   -  The Encyclopedia of Science Fiction   -  50 Questions To Help Students Think About What They Think - TeachThought   -  The Six Main Stories, As Identified by a Computer - The Atlantic   -  Writing for Visual Thinkers: Narrative Structures   -  Daily Writing Tips   -  English Adjectives for Describing Physical Appearance - Vocabulary for Talking About How People Look   -  There's a Word for That: 25 Expressions You Should Have in Your Vocabulary   -  102 Resources for Fiction Writing « Here to Create   -  100 Useful Web Tools for Writers   -  How to Cite Sources & Not Steal People's Content on the Internet   -  Globe Genie   -  World-building   -  Famous Advice on Writing: The Collected Wisdom of Great Writers   -  25 Things You Should Know About Storytelling   -  Ten rules for writing fiction   -  6 Ways to Hook Your Readers   -  Cliches: Avoid Them Like the Plague   -  How To Write A Novel Using The Snowflake Method   -  Links for Aspiring Writers   -  6 Ways to Make Sure Your Reader’s Brain Syncs with Your Protagonist’s Brain   -  What makes a hero? - Matthew Winkler   -  Kurt Vonnegut’s 8 Tips on How to Write a Great Story   -  Three anti-social skills to improve your writing - Nadia Kalman   -  Color Words   -  The Phrontistery: Obscure Words and Vocabulary Resources   -  100 Mostly Small But Expressive Interjections   -  Short Story Ideas and Creative Writing Prompts   -  10 top writing tips and the psychology behind them   -  Education   -  Enterprise