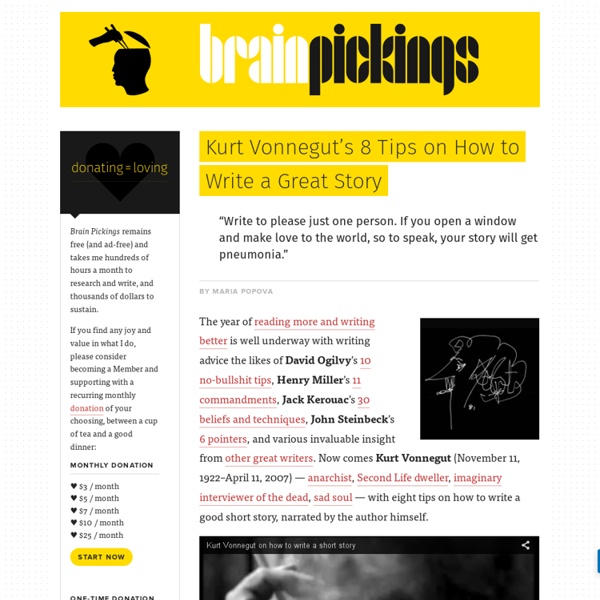 By Maria Popova The year of reading more and writing better is well underway with writing advice the likes of David Ogilvy’s 10 no-bullshit tips, Henry Miller’s 11 commandments, Jack Kerouac’s 30 beliefs and techniques, John Steinbeck’s 6 pointers, and various invaluable insight from other great writers. Now comes Kurt Vonnegut (November 11, 1922–April 11, 2007) — anarchist, Second Life dweller, imaginary interviewer of the dead, sad soul — with eight tips on how to write a good short story, narrated by the author himself. Use the time of a total stranger in such a way that he or she will not feel the time was wasted.Give the reader at least one character he or she can root for.Every character should want something, even if it is only a glass of water.Every sentence must do one of two things — reveal character or advance the action.Start as close to the end as possible.Be a Sadist.

How to Write with Style: Kurt Vonnegut’s 8 Keys to the Power of the Written Word Find a Subject You Care About Find a subject you care about and which you in your heart feel others should care about. It is this genuine caring, and not your games with language, which will be the most compelling and seductive element in your style. 10 Everyday Words With Unexpected Origins Books Etymology, or the study of the origin of words, is dry, dusty stuff that will give you allergies if you play with it too long. It also happens to be one of our favorite topics—because sometimes a word travels through such a twisted path to get to its modern meaning that all you can do is scratch your head and wonder how civilization manages to keep itself going. Read on to find out what word got its start with people biting the heads off chickens, how a peaceful word became an international symbol of hate, and how wooden shoes changed the world.

MetaMaus: Inside the Making of the Comic that Made History by Maria Popova Why comics? Why mice? 6 Rules for a Great Story from Barnaby Conrad and Snoopy by Maria Popova “And remember: Always aim for the heart!” You might recall Snoopy’s Guide to the Writing Life (public library), which gave us Ray Bradbury’s wise words on rejection. To recap: Barnaby Conrad and Monte Schulz, son of Peanuts creator Charles M. Schulz, asked 30 famous authors and entertainers to each respond to a favorite Snoopy comic strip with a 500-word essay on the triumphs and tribulations of the writing life. Data Mining Novels Reveals the Six Basic Emotional Arcs of Storytelling Back in 1995, Kurt Vonnegut gave a lecture in which he described his theory about the shapes of stories. In the process, he plotted several examples on a blackboard. “There is no reason why the simple shapes of stories can’t be fed into computers,” he said. “They are beautiful shapes.” The video is available on YouTube. Vonnegut was representing in graphical form an idea that writers have explored for centuries—that stories follow emotional arcs, that these arcs can have different shapes, and that some shapes are better suited to storytelling than others.

20 words that once meant something very different Words change meaning over time in ways that might surprise you. We sometimes notice words changing meaning under our noses (e.g., unique coming to mean “very unusual” rather than “one of a kind”) — and it can be disconcerting. How in the world are we all going to communicate effectively if we allow words to shift in meaning like that? The good news: History tells us that we’ll be fine. Words have been changing meaning — sometimes radically — as long as there have been words and speakers to speak them. Here is just a small sampling of words you may not have realized didn’t always mean what they mean today. Inside the Creative Process of Cut-Paper Storyteller Béatrice Coron by Maria Popova Slicing the different layers we’re made of, or what an 18th-century French statesman has to do with the MTA. Béatrice Coron has been a shepherdess, a truck driver, a factory worker, a cleaning lady, and a tour guide. But today, Coron is one of the world’s most remarkable cut-paper artists.

How to Write with Style: Kurt Vonnegut's 8 Keys to the Power of the Written Word Find a Subject You Care About Find a subject you care about and which you in your heart feel others should care about. It is this genuine caring, and not your games with language, which will be the most compelling and seductive element in your style. Kids explain how banned and challenged books helped them and even saved their lives / Boing Boing By Joan Bertin and Millie Davis Banned Books Week has come and gone but we can be sure of one thing: the coming year will be marked by challenges to the same kinds of books that were controversial this year, and in years past. report this ad