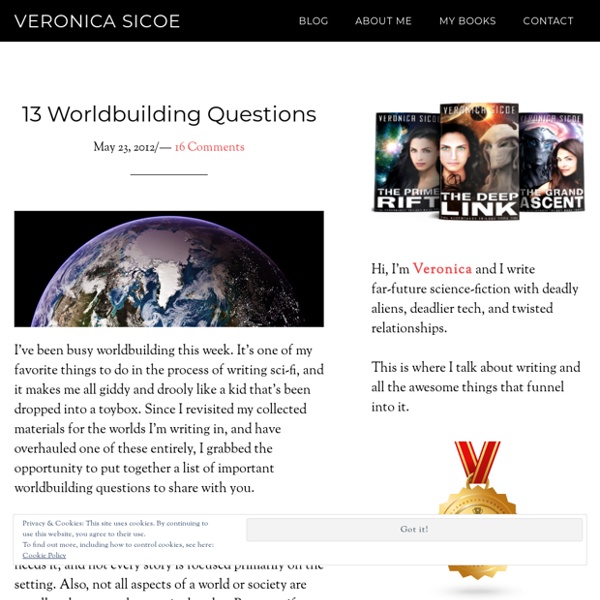 Setting: Using Scene To Enrich Your Writing In both fiction and nonfiction, the setting is the general background against which your story takes place—the physical location and time period, both of which influence your characters and plot. So how can a creative writer use setting and scenery to further offset, augment, or reflect the action of the plot? Although we’re going to be exploring this issue in terms of fiction, these techniques work for nonfiction as well. These craft techniques work in all genres: poetry, stories, personal essays, memoir, and books. Suppose you’re writing a novel that is set in the Deep South in 1955 and your protagonist is an immigrant facing prejudice and roadblocks at every turn. Setting the stage for a short story or novel is a crucial part of engaging your reader. 1. 2. 3. 4. 5. 6. These are just a few of the ways an author can use the setting of a story to enhance the characters, plot, and theme of a short story or novel. QUESTION: What was the setting of the last thing you wrote?

6 Ways to Create Riveting Conflict in Your Story Who says conflict is a bad thing? Who says world peace is the most important goal of humanity? Who says arguing with your little brother when you’re a kid means you’ll grow up to be an ill-mannered ruffian? Not a writer, that’s for sure! Arguably, the single most important tenet of fiction can be summed up in the saw “no conflict, no story.” The simple fact is: fiction has its very basis in conflict. So how does one go about manufacturing this most precious of story ingredients? 1. This is the easiest (and, often, the best) way to throw a little conflict in your story. 2. Many stories base their entire premise on this idea (think of the Pevensie siblings tumbling through the wardrobe into Narnia in C.S. 3. For a long while, I had tacked on my bulletin board a note which read, “Think of the ten worst things that could happen to your character.” 4. Nancy Kress, in her fantastic book Beginnings, Middles & Ends spoke about the necessity of including both inner and outer battles: 5. 6.

City Generator Clear Communication Introduction to Plain Language at NIH Plain language is grammatically correct language that includes complete sentence structure and accurate word usage. Plain language is not unprofessional writing or a method of "dumbing down" or "talking down" to the reader. Writing that is clear and to the point helps improve communication and takes less time to read and understand. Clear writing tells the reader exactly what the reader needs to know without using unnecessary words or expressions. Plain Language Act President Barack Obama signed the Plain Writing Act of 2010 (H.R. 946/Public Law 111-274) on October 13, 2010. Part of the NIH mission is to reach all Americans with health information they can use and to communicate in a way that helps people to easily understand research results. Celebrating Plain Language at NIH Plain Language/Clear Communications Awards Program Tips for Using Plain Language: Certain qualities characterize plain language. 1. 3. Organization. 4. Where Can I Learn More?

21 Harsh But Eye-Opening Writing Tips From Great Authors A lot of people think they can write or paint or draw or sing or make movies or what-have-you, but having an artistic temperament doth not make one an artist. Even the great writers of our time have tried and failed and failed some more. Vladimir Nabokov received a harsh rejection letter from Knopf upon submitting Lolita, which would later go on to sell fifty million copies. Sylvia Plath’s first rejection letter for The Bell Jar read, “There certainly isn’t enough genuine talent for us to take notice.” Gertrude Stein received a cruel rejection letter that mocked her style. So even if you’re an utterly fantastic writer who will be remembered for decades forthcoming, you’ll still most likely receive a large dollop of criticism, rejection, and perhaps even mockery before you get there. 1. 2. 3. 4. 5. 6. 7. 8. 9. 10. 11. 12. 13. 14. 15. 16. 17. 18. 19. 20. 21.

Serendipity Dave's Mapper | RPG Map Generator FAQ - PressThink (Originally published April 29, 2004) If you’re the kind of person who loves to complain about “meta” posts and make fun of blogging about blogging, please. Don’t read this post. You’ll hate it. It’s the echo chamber again. Q & A about how I do my blog, PressThink. … other writers trying to do a decent weblog who wish to compare and contrast, plus curious readers of PressThink, students in a Net journalism class, maybe. Some of these questions are asked frequently by readers or seen in comments. Why are PressThink posts so long? When I started asking around about how to do a weblog, I got many kinds of answers. So you decided to be contrarian and go the other way? No, contrarians are annoying. “People don’t have time for…” reasoning was meaningless to me, and I didn’t trust it. But it’s more like: this is my magazine, PressThink… If you like it, return. Fine, but weren’t your advisors just making a simple point about the nature of the Web medium? Sure, and I thanked them. Summer 2016.