50 Questions To Help Students Think About What They Think - TeachThought 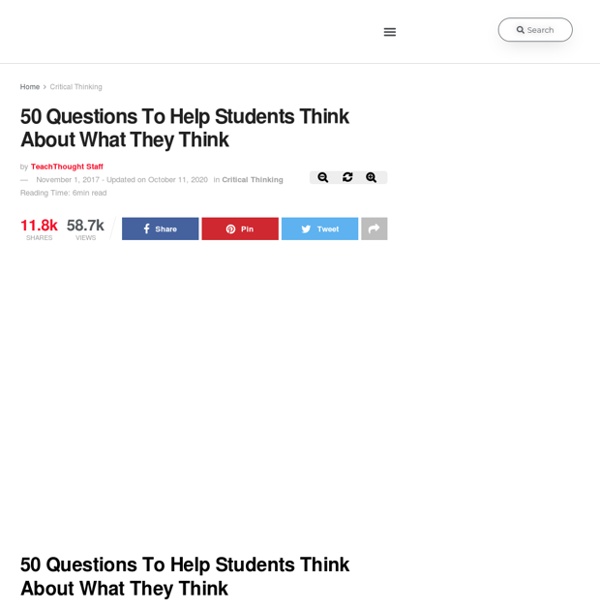 contributed by Lisa Chesser Using the right questions creates powerful, sometimes multiple answers and discussions. Aristotle said that he asked questions in response to other people’s views, while Socrates focused on disciplined questioning to get to the truth of the matter. Ultimately questions spark imagination, conjure emotions, and create more questions. The questions asked by a teacher or professor are sometimes more glaringly valuable than the information transferred to the students. Those questions spark a thought, which leads to a fiercely independent search for information. If students are the ones gathering that information then they’re the ones learning it and student-driven learning cements lessons into the students’ minds making any lesson more powerful with this strategy. The questions are unrestricted and open the mind up to unfettered thought, perfect for innovation and understanding. See also our 28 Critical Thinking Question Stems For Classroom Use Logical Questions 1.

E Welty on Writing etc 2 clicks To be human is to unfold in time but remain discontinuous. We are living non sequiturs seeking artificial cohesion through the revisions our memory, that capricious seamstress, performs in threading the stories we tell ourselves about who we are. It is, after all, nothing but a supreme feat of storytelling to draw a continuous thread between one’s childhood self and one’s present-day self, since hardly anything makes these two entities “the same person” — not their height, not their social stature, not their beliefs, not their circle of friends, not even the very cells in their bodies.

Many, Many Examples Of Essential Questions Many, Many Examples Of Essential Questions by Terry Heick Essential questions are, as Grant Wiggins defined, ‘essential’ in the sense of signaling genuine, important and necessarily-ongoing inquiries.” These are grapple-worthy, substantive questions that not only require wrestling with, but are worth wrestling with–that could lead students to some critical insight in a 40/40/40-rule sense of the term. I collected the following set of questions through the course of creating units of study, most of them from the Greece Central School District in New York.

Using Concept Routines to Drive Inquiries Exploring concepts through inquiry can be a tricky area of teaching and learning to navigate. But it doesn’t have to be as complex as most people think. Concept routines are effective tools to help make students’ thinking visible and gather the data you need to set-up future investigations. A meaningful inquiry can be well-planned and structured without stifling creativity or giving too much away. Le Guin: Art, Information, Theft, and Confusion, Part 2 Continued from Part One i. Influence A long time ago now, discussing my book The Lathe of Heaven, I called it “a homage to Philip K. Dick” (who was then not the culture hero he has become, but a science fiction writer scorned as such by the American literary establishment, and honored mostly within the genre and in France).

The Ethics Centre - Ethics Explainer: Tolerance The yes result of the same-sex marriage survey is in. Now parliament is dealing with the minefield of tolerance: how will it change legislation so it honours family diversity and religious freedoms without discriminating against either? What should be tolerated, accepted and prohibited? This week’s Ethics Explainer should help… For some people, the value of tolerance is simply the opposite of intolerance.

100 Questions That Help Students Think About Thinking - 100 Questions That Help Students Think About Thinking by Terry Heick Last year I wrote a post on how to help students think for themselves. TeachThought reader Peter Duckett wrote me a few months later with these questions below that he added in order to facilitate their use in the classroom. I’ve added some myself, and am going to continue to add more after giving you a chance to do so. In the comments below, suggest a question for one of the categories below and I’ll add them to the list. 3rd grade Geography Supporting Question Where are we, as a class community, located? Formative Task Describe the location of the school using geographic tools and vocabulary. Sources Source A: Google Maps Supporting Question Where are we, as people on Earth, located? Formative Task Complete a two-column chart that describes the location of the world’s people in terms of population density.

6 Easy Steps to Unforgettable Characters By Laurence MacNaughton, @LMacNaughton Part of the How They Do It Series (Contributing Author) Readers will pick up your book because of the concept, but they’ll keep reading because of the characters. No matter what genre you write in, interesting characters are absolutely essential to a well-told story. So what's the easiest way to create them? Most writers approach character creation in a haphazard manner, making things up as they go along. St. Petersburg College Critical Thinking Gateway Three settings are conducive for critical thinking games: classroom, online, and outdoors (e.g., leadership development activities): Simulations provide realistic or semi-realistic opportunities for students to practice skills and solve problems in safe environments. They differ from structured experiential activities by their multi-part and branching nature.