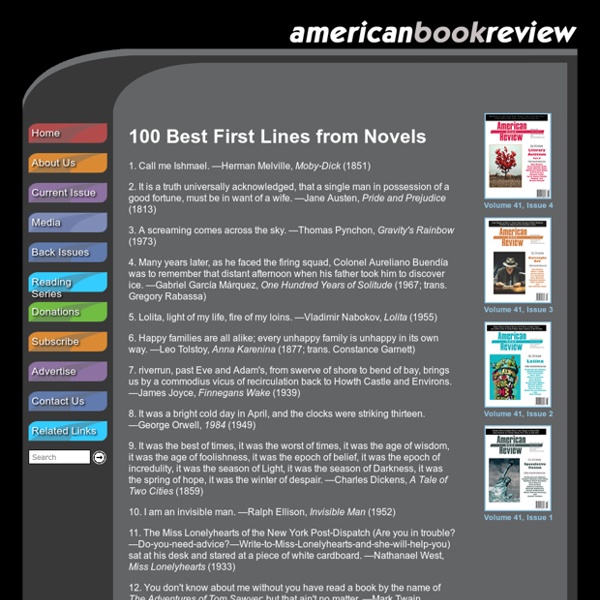 Oregon-born Beverly Cleary, beloved children's author, dies at 104 NEW YORK — Beverly Cleary, the celebrated children's author whose memories of her Oregon childhood were shared with millions through the likes of Ramona and Beezus Quimby and Henry Huggins, has died. She was 104. Cleary's publisher HarperCollins announced Friday that the author died Thursday in Northern California, where she had lived since the 1960s. No cause of death was given. Trained as a librarian, Cleary didn't start writing books until her early 30s when she wrote "Henry Huggins," published in 1950.

Nude in your hot tub, facing the abyss (A literary manifesto after the end of Literature and Manifestos) Down from the Mountain Once upon a time, writers were like gods, and lived in the mountains. They were either destitute hermits or aristocratic lunatics, and they wrote only to communicate with the already dead or the unborn, or for no one at all. They had never heard of the marketplace, they were arcane and antisocial. Though they might have lamented their lives—which were marked by solitude and sadness—they lived and breathed in the sacred realm of Literature. They wrote Drama and Poetry and Philosophy and Tragedy, and each form was more devastating than the last.

Salman Rushdie: Ask Yourself Which Books You Truly Love The wonder tales taught me that approaches to storytelling were manifold, almost infinite in their possibilities, and that they were fun. The fantastic has been a way of adding dimensions to the real, adding fourth, fifth, sixth and seventh dimensions to the usual three; a way of enriching and intensifying our experience of the real, rather than escaping from it into superhero-vampire fantasyland. Only by unleashing the fictionality of fiction, the imaginativeness of the imagination, the dream songs of our dreams, can we hope to approach the new, and to create fiction that may, once again, be more interesting than the facts.

Introduction to Literature Old Fence. A short story has a structure and a message. Can you analyze this picture in much the same way as a short story? What Is a Short Story? A short story is a work of short, narrative prose that is usually centered around one single event. It is limited in scope and has an introduction, body and conclusion. Pocket The best definition of a meet-cute I’ve ever heard comes from classic and important film The Holiday: “Say a man and a woman both need something to sleep in, and they both go to the same men’s pajama department, and the man says to the salesman, ‘I just need bottoms.’ The woman says, ‘I just need a top.’ They look at each other, and that’s the meet-cute.”

Style: Definition and Examples I. What is Style? While you may not think about it all the time, there’s a lot more to literature than storylines and content. In literature, style is the way in which an author writes and/or tells a story. Kurt Vonnegut’s Greatest Writing Advice ‹ Literary Hub Today, if you can believe it, makes it ten years since we lost one of the greatest American writers—and, no matter how he tried to deny it, one of the greatest writing teachers. Certainly one of the greatest writing advice list-makers, at any rate. Vonnegut’s many thoughts on writing have been widely shared, taught, studied and adapted (designer Maya Eilam’s infographic-ized version of his “shapes of stories” lecture springs vividly to mind) because his advice tends to be straightforward, generous, and (most importantly) right.

Literary Devices and Literary Terms Introduction Commonly, the term Literary Devices refers to the typical structures used by writers in their works to convey his or her message(s) in a simple manner to his or her readers. When employed properly, the different literary devices help readers to appreciate, interpret and analyze a literary work. Two Kinds of Literary Devices Literary Devices have two aspects. They can be treated as either Literary Elements or Literary Techniques. ‘Truman & Tennessee: An Intimate Conversation’ Review: Friendship in Focus Merging two biographies is a solid way to enliven the often-tedious genre of the literary documentary. But the connections drawn in “Truman & Tennessee: An Intimate Conversation” are sufficiently instructive that watching and listening to these writers is also, in a way, like hearing one author in stereo. The director Lisa Immordino Vreeland uses the friendship between Truman Capote and Tennessee Williams to construct a dialogue between them, using the writing and appearances they left behind. Jim Parsons reads Capote’s words in voice-over and Zachary Quinto reads Williams’s.

Metaphor and metonymy In the unconscious: condensation and displacement[edit] In 1957, Jacques Lacan, inspired by an article by linguist Roman Jakobson, argued that the unconscious has the same structure of a language, and that condensation and displacement are equivalent to the poetic functions of metaphor and metonymy.[1][2][7] References[edit] How 'A Wrinkle in Time' Changed Sci-Fi Madeleine L'Engle sat in front of her typewriter in the Tower, her private workspace in her family’s isolated, 200-year-old Connecticut farmhouse. It was her 40th birthday—November 29, 1958—and she was at a crossroads. Though she had published five novels since her mid-twenties, she was far from a household name, and lately she was having trouble selling her work. She considered her thirties a “total failure” professionally. “Every rejection slip—and you could paper walls with my rejection slips—was like the rejection of me, myself, and certainly of my amour-propre,” she wrote.

Plot (narrative) Plot and Story. Plot is the cause‐and‐effect sequence of events in a story.[1] Plot is a narrative (and, traditionally, literary) term defined as the events that make up a story, particularly: as they relate to one another in a pattern or in a sequence; as they relate to each other through cause and effect; how the reader views the story; or simply by coincidence. Authors are generally interested in how well this pattern of events accomplishes some artistic or emotional effect. An intricate, complicated plot is called an imbroglio, but even the simplest statements of plot may include multiple inferences, as in traditional ballads.[2] A Black Writer Found Tolerance in France, and a Different Racism When William Gardner Smith submitted what would be his final novel, THE STONE FACE (New York Review Books, paper, $16.95), to a French publisher, his friend and biographer LeRoy Hodges recalled, the editor told Smith it was “very courageous to have written the book, but we can’t publish it in France.” How could a courageous novel by an established writer have met with such immediate dismissal? In America, “The Stone Face” (1963) had been accepted by Farrar, Straus, like Smith’s three previous novels. Why not France? The answer is more complicated than the rejection.