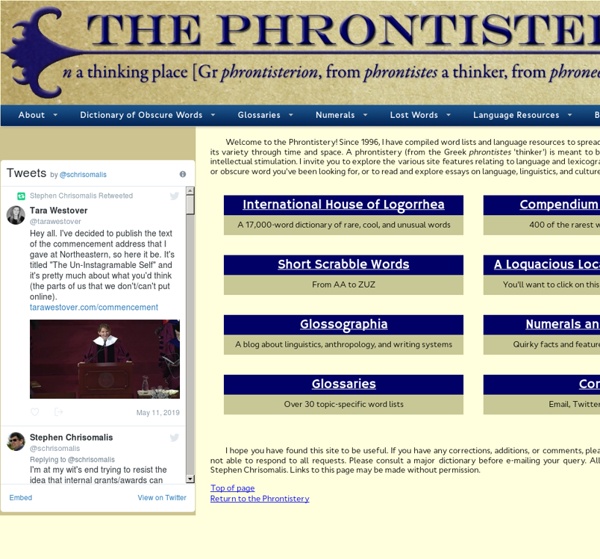 How to Write with Style: Kurt Vonnegut’s 8 Keys to the Power of the Written Word Find a Subject You Care About Find a subject you care about and which you in your heart feel others should care about. It is this genuine caring, and not your games with language, which will be the most compelling and seductive element in your style. I am not urging you to write a novel, by the way — although I would not be sorry if you wrote one, provided you genuinely cared about something. A petition to the mayor about a pothole in front of your house or a love letter to the girl next door will do. 50 Questions To Help Students Think About What They Think click 2x contributed by Lisa Chesser Using the right questions creates powerful, sometimes multiple answers and discussions. Aristotle said that he asked questions in response to other people’s views, while Socrates focused on disciplined questioning to get to the truth of the matter.

How language can affect the way we think Keith Chen (TED Talk: Could your language affect your ability to save money?) might be an economist, but he wants to talk about language. For instance, he points out, in Chinese, saying “this is my uncle” is not as straightforward as you might think. In Chinese, you have no choice but to encode more information about said uncle. The language requires that you denote the side the uncle is on, whether he’s related by marriage or birth and, if it’s your father’s brother, whether he’s older or younger.

100 Exquisite Adjectives By Mark Nichol Adjectives — descriptive words that modify nouns — often come under fire for their cluttering quality, but often it’s quality, not quantity, that is the issue. Plenty of tired adjectives are available to spoil a good sentence, but when you find just the right word for the job, enrichment ensues. Practice precision when you select words. The Popul Vuh, by Lewis Spence Sacred-texts Native American Excerpt from: The Mythic and Heroic Sagas of the Kichés of Central America Data Mining Novels Reveals the Six Basic Emotional Arcs of Storytelling Back in 1995, Kurt Vonnegut gave a lecture in which he described his theory about the shapes of stories. In the process, he plotted several examples on a blackboard. “There is no reason why the simple shapes of stories can’t be fed into computers,” he said. “They are beautiful shapes.”

How to improve your Critical Thinking skills: Interview with Dr. Gerald Nosich – Life Lessons In this article I interview an expert on Critical Thinking, Dr. Gerald Nosich from the Foundation for Critical Thinking, who has been teaching Critical Thinking since 1977 to find out how we can improve our Critical Thinking skills. In this article you will learn: Let’s start at the beginning… Michael: What is Critical thinking? Zero Historical scientists categorize the types of number systems peoples use, much the same way philologists break down languages into "analytic," "agglutinative," "inflectional," etc. The path that leads to the discovery of "0" lies only in the most advanced type of number system, which is called "positional" because the value of a character depends on its position. Our modern way of counting is positional. The base figure "5" has a different value in 514 and in 145, determined by its position. The Romans, Greeks, Hebrews (and Aztecs and pre-Islamic Arabs and a great many others) used an "additive" system, which is fundamentally a transcription of counting. A Roman "V" meant "five" and that's all it could mean.

100 Mostly Small But Expressive Interjections David Bier Thanks for this – what a fun post considering there’s no actual narrative in it! Cecily Some of these interjections are quite culturally and age specific, so if people need to be told what they mean, they should probably not be using them.For example, to many Brits, va-va-voom is not old-fashioned at all, but instead is firmly linked to the long-running ads that footballer Thierry Henry made for the Renault Clio. Himanshu Chanda Whoa !

"Since 1996, I have compiled word lists and language resources to spread the joy of the English language in all its variety through time and space. A phrontistery (from the Greek phrontistes 'thinker') is meant to be a thinking-place for reflection and intellectual stimulation. I invite you to explore the various site features relating to language and lexicography, find that half-remembered rare or obscure word you've been looking for, or to read and explore essays on language, linguistics, and culture. " by macopa May 12