From 'Avatar' to 'Jurassic Park,' 'Beowulf' to 'Jaws,' All Stories Are the Same 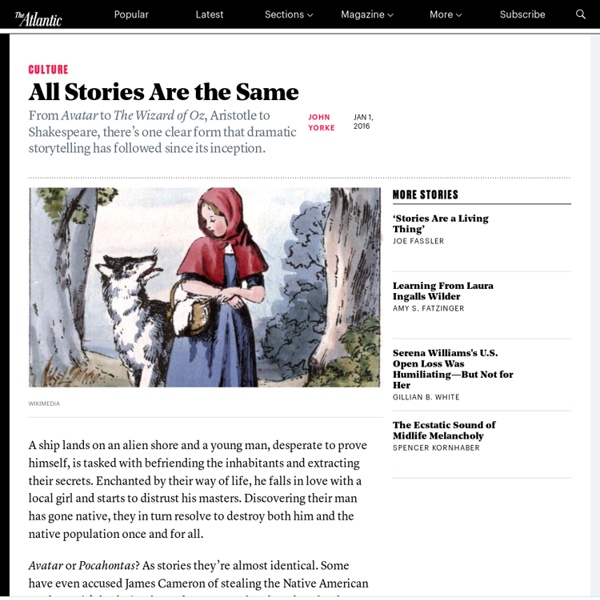 A ship lands on an alien shore and a young man, desperate to prove himself, is tasked with befriending the inhabitants and extracting their secrets. Enchanted by their way of life, he falls in love with a local girl and starts to distrust his masters. Discovering their man has gone native, they in turn resolve to destroy both him and the native population once and for all. Avatar or Pocahontas? As stories they’re almost identical. Some have even accused James Cameron of stealing the Native American myth. Take three different stories: A dangerous monster threatens a community. It’s the story of Jaws, released in 1976. And it’s more familiar than that: It’s The Thing, it’s Jurassic Park, it’s Godzilla, it’s The Blob—all films with real tangible monsters. Our hero stumbles into a brave new world. It’s Alice in Wonderland, but it’s also The Wizard of Oz, Life on Mars, and Gulliver’s Travels. It’s Raiders of the Lost Ark, Morte D’Arthur, Lord of the Rings, and Watership Down. 1.

Frank Chimero - The Web’s Grain A view on designing for the web Trust me: it’s totally worth it. Oh, and while you’re listening, pay attention to your chest. You may feel a growing warmth, kind of like the firey trickle after a shot of whiskey. All right, here we go: Wasn’t that great? The Democrats’ Filthy Flint Water Daniel Greenfield, a Shillman Journalism Fellow at the Freedom Center, is a New York writer focusing on radical Islam. Mayor Dayne Walling, a Democrat, led a cheerful countdown at the Flint water treatment plant to press the button moving the city over to river water. Walling and Darnell Earley, the Democratic emergency manager, even raised glasses in a toast and drank the water to show that it was safe.

The Top 10 Second Hand Bookshops in Dublin Because there's nothing better than curling up with a good book! Whether its feeling of picking up something pre-read and pre-loved or the low cost, sometimes there's no greater refuge from the hustle and bustle of city life than browsing around a second hand book shops. As a city of such literary prestige, it's no surprise that Dublin has some wonderful places to pick up a used book. To make matters easier for you, we've decided to make a list of the ten best still going in the city! 10. You probably know to ask yourself, “What do I want?” Here’s a way better question Everybody wants what feels good. Everyone wants to live a carefree, happy and easy life, to fall in love and have amazing sex and relationships, to look perfect and make money and be popular and well-respected and admired and a total baller to the point that people part like the Red Sea when you walk into the room. Everyone would like that — it’s easy to like that. If I ask you, “What do you want out of life?” and you say something like, “I want to be happy and have a great family and a job I like,” it’s so ubiquitous that it doesn’t even mean anything.

How to Change Adobe Dreamweaver Code View Theme You have probably been told that staring at bright computer screens for a long period is bad for your eyes. You might reply that we have dark themed websites and the dark backgrounds are cutting down on the damage caused. Plus, dark themes can make anything look a whole lot cooler. If you work on Dreamweaver a lot, you might like this particular tip we have for you. We found a way to change the HTML view on Adobe’s Dreamweaver into ‘night mode’, thanks to CS6Shortcuts.com. Marijuana 'Dabbing' Is 'Exploding onto the Drug-Use Scene' Young people who use marijuana and are looking for a new way to get high may be increasingly turning to "dabbing," a new paper suggests. Dabbing is inhaling the vapors from a concentrated form of marijuana made by an extraction method that uses butane gas. Dabs, also known as butane hash oil (BHO) — which are sometimes called "budder," "honeycomb" or "earwax" — are more potent than conventional forms of marijuana because they have much higher concentrations of the psychoactive chemical tetrahydrocannabinol, or THC, than is found in regular cannabis, according to the paper. "We have been seeing an emergence of dabs over the last three years," said John Stogner, co-author of the new paper and an assistant professor of criminal justice and criminology at the University of North Carolina at Charlotte.

17 Irish independent bookshops you must visit before you die BOOK LOVERS WILL know how it feels to enter a brilliantly stocked, cosy bookshop and feel immediately at home. These days, independent bookshops are rare. There’s not many of them left, so they should be treasured. Here, in no particular order, are 17 of the best and most beautiful independent bookshops on the island of Ireland. 1) Charlie Byrne’s, Galway Source: Charlie Byrne's ILLUSTRATION ART: JACK KIRBY'S FAKE ANATOMY Thousands of years later, art history is still littered with failed attempts at shortcuts on anatomy. Artists have tried concealing their ignorance by using heavy shadows or excessive random lines or a soft focus. They have tried concealing hands in pockets, or cropping pictures to exclude difficult parts, but their weakness shows through. Yet, consider the drawings of Jack Kirby: Kirby invented his own version of anatomy, and while it is often inaccurate, it seems just as persuasive as the genuine anatomy found in Bridgman, Vesalius or Muybridge. Contrast the following study of deltoid, bicep and elbow from George Bridgman's life drawing class...