Trapped in a hoax: survivors of conspiracy theories speak out 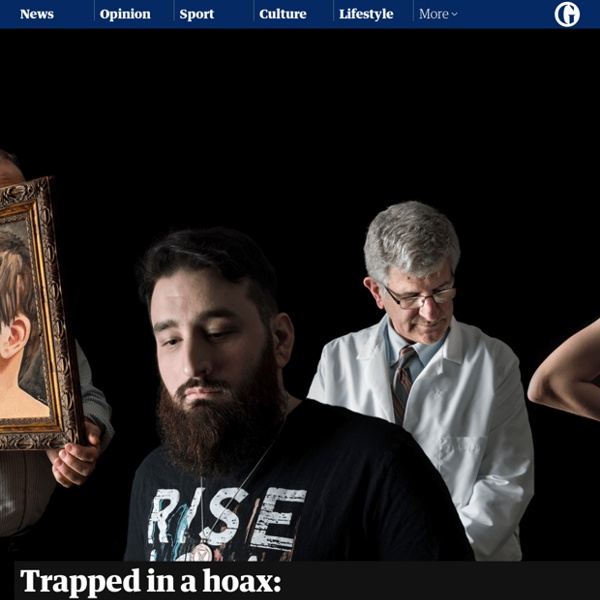 Conspiracy theories used to be seen as bizarre expressions of harmless eccentrics. Not any more. Gone are the days of outlandish theories about Roswell’s UFOs, the “hoax” moon landings or grassy knolls. Instead, today’s iterations have morphed into political weapons. Turbocharged by social media, they spread with astonishing speed, using death threats as currency. Together with their first cousins, fake news, they are challenging society’s trust in facts. Their growing reach and scale is astonishing. The trend began on obscure online forums such as the alt-right playground 4chan. Now the conspiracy theorist-in-chief sits in the White House. Amid this explosive growth, one aspect has been underappreciated: the human cost. The Guardian talked to five people who can speak from bitter personal experience. Valentine’s Day 2018 was Marcel Fontaine’s day off. By the time they roused themselves, the deadliest high school shooting in US history was already over. Fontaine was horrified.

Fake news is more likely to be shared by older people — but we don't know why - Science News - ABC News It's an internet cliché: Grandma or grandpa posting dodgy articles about mobile phones emitting gamma rays or wild political conspiracies in their Facebook feed. Key points: Older people were more likely to share links from misleading news sites during the 2016 US presidential election, two studies suggestOverall, they also found few people shared or saw 'fake news' on social mediaExperts suggest we need to boost digital literacy among people of all ages Two new reports support such anecdotes, finding that older people were more likely to share articles from bogus news websites on social media during the 2016 US presidential election, although the phenomenon was rare overall. "This was certainly one of those times when the research backed up what a lot of people may have suspected already," Dr Andrew Guess said. Another study published in Science this week came up with largely similar results using Twitter data.

A Russian 'troll slayer' went undercover at a troll factory Slaying online trolls can be a lonely business. Just ask Russia’s Lyudmila Savchuk, who first exposed the story of Russia’s disinformation campaign back in 2014. The journalist and 33-year-old mother of two, Savchuk started noticing websites and social media accounts attacking local opposition activists in her hometown of Saint Petersburg with a frequency she hadn’t seen before. A bill aims to stop abusers stalking ex-partners. US telecom firms are lobbying against it The top lobby group for the US wireless industry is quietly seeking to weaken proposed legislation that has been designed to protect victims of domestic violence by allowing them to remove themselves from family phone plans. Companies including Verizon, T-Mobile and AT&T Wireless are seeking to protect themselves from possible future liability and enforcement in the event that they do not adequately comply with the new proposed legislation. Advocates say the bill would help prevent abusers from surveilling and stalking their victims after leaving the relationship. At the centre of the dispute lies an effort by members of Congress to tackle what victims’ advocates say is a major issue in helping victims leave abusive relationships: getting out of a family mobile phone plan that can give abusers, the vast majority of whom are men, a dangerous level of access to a victim’s network of support, from friends to family to their workplace.

Families of Sandy Hook Shooting Victims Score Legal Victory Against Conspiracy Shock Jock, Alex Jones – The Credible Hulk Six families of victims of the Sandy Hook Elementary School shooting won a legal victory against internet and radio personality, Alex Jones, the conspiracy shock jock host of Infowars: the platform on which Jones alleged that the shooting at Sandy Hook was staged by crisis actors as a ploy to motivate stricter gun control laws. The plaintiffs include the parents of five children who were attending the school when they were killed in the shooting, as well as family members of 1st grade teacher, Victoria Leigh Soto and Principal Dawn Hochsprung, according to a statement from the plaintiff’s attorneys. According to the statement, the plaintiffs accuse Jones of a “years-long campaign of abusive and outrageous false statements in which Jones and the other defendants have developed, amplified and perpetuated claims that the Sandy Hook massacre was staged and that the 26 families who lost loved ones that day are paid actors who faked their relative’s deaths.”

Why we need to talk about the media’s role in far-right hate When it comes to the threat of Islamist terrorism, no one doubts the role of radicalisation. The internet, hate preachers such as Anjem Choudary and Abu Hamza, and the western-armed, extremism-exporting state of Saudi Arabia: all play their part in radicalising the impressionable. When it comes to the far right, however, this consensus is absent. The reason for this is as obvious as it is chilling: the hate preachers, recruiting sergeants and useful idiots of rightwing extremism are located in the heart of the British, European and American establishments. They are members of the political and media elite. Less than two weeks ago, dozens of Muslims were murdered in Christchurch.

‘I was addicted to the high’: I became an influencer as a joke – then it nearly broke me I have always wanted to be a comedian or television presenter, but never knew how I’d make it happen. After years of working in TV production, pestering executives to put me in a show, I conceded that I might have to demonstrate to them what I could do in order to prove my worth. This is how I ended up spending a Friday afternoon in April 2015 secretly writing a standup show at my desk, hoping to one day take it to the Edinburgh fringe. “Bella,” said my boss, Faye, over the top of her computer, “can you do some research on wellness, please? Someone called Deliciously Ella’s got the fastest-selling cookbook in the country and I want to know if we should put her on the telly.”

The Unlikely New Generation of Unabomber Acolytes John Jacobi discovered Ted Kaczynski’s writing at an anarchists camp in Chapel Hill, North Carolina. Photo: Colby Katz When John Jacobi stepped to the altar of his Pentecostal church and the gift of tongues seized him, his mother heard prophecies — just a child and already blessed, she said. Someday, surely, her angelic blond boy would bring a light to the world, and maybe she wasn’t wrong.

Internal emails reveal how the chemical lobby fights regulation Jayne DePotter spent almost a decade making her Michigan jewelry studio a second home for young artists seeking direction, seniors looking to exercise their hands and minds and new immigrants in search of community. And then she started to get sick. First came the brain fog, then the painful kidney and bladder symptoms. “It feels like I have a bladder infection all the time,” DePotter said.

Governments across Canada withholding COVID-19 data to regulate public reaction to pandemic, says access-to-information advocate VANCOUVER—Governments across Canada have been withholding COVID-19 data in an exercise of “paternalistic” information-hoarding likely meant to regulate public reaction to the pandemic, says an access-to-information advocate. Sean Holman, an access to information expert and journalism professor at Mount Royal University in Calgary, said uproar in British Columbia Friday over revelations the provincial government was only releasing a fraction of its COVID-19 data to the public is just one example of such secrecy. “It doesn’t surprise me,” said Holman, who stressed B.C. is particularly notorious for withholding information. “But it really emphasizes the need for governments across Canada to provide more information to the general public about what’s going on during this public health disaster.”

Why atheists are not as rational as some like to think Many atheists think that their atheism is the product of rational thinking. They use arguments such as “I don’t believe in God, I believe in science” to explain that evidence and logic, rather than supernatural belief and dogma, underpin their thinking. But just because you believe in evidence-based, scientific research – which is subject to strict checks and procedures – doesn’t mean that your mind works in the same way. When you ask atheists about why they became atheists (as I do for a living), they often point to eureka moments when they came to realise that religion simply doesn’t make sense. Oddly perhaps, many religious people actually take a similar view of atheism. This comes out when theologians and other theists speculate that it must be rather sad to be an atheist, lacking (as they think atheists do) so much of the philosophical, ethical, mythical and aesthetic fulfilments that religious people have access to – stuck in a cold world of rationality only.