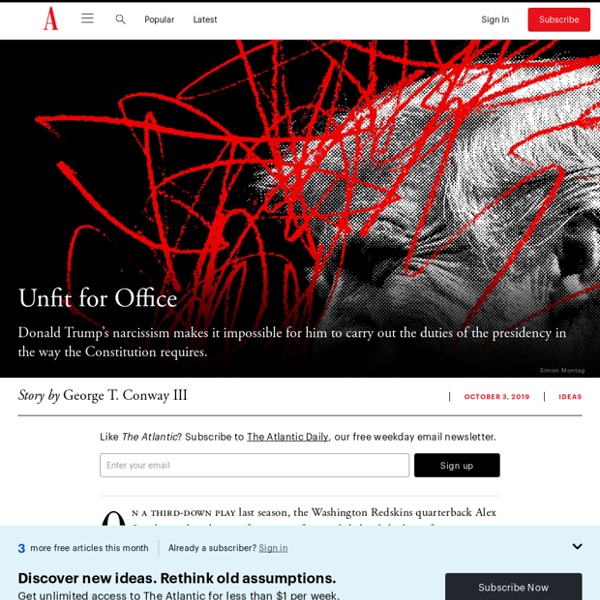 On a third-down play last season, the Washington Redskins quarterback Alex Smith stood in shotgun formation, five yards behind the line of scrimmage. As he called his signals, a Houston Texans cornerback, Kareem Jackson, suddenly sprinted forward from a position four yards behind the defensive line. To hear more feature stories, see our full list or get the Audm iPhone app. Jackson’s timing was perfect. The ball was snapped. The Texans’ left defensive end, J.J. Special-teams players began taking the field for the punt. Even without the benefit of medical training, and even without conducting a physical examination, viewers knew what had happened. And so it is, or ought to be, with Donald Trump. No president in recent memory—and likely no president ever—has prompted more discussion about his mental stability and connection with reality. Read more: Donald Trump’s 50 most unthinkable moments Rosenstein denies that claim, but it is not the only such account. But can Trump do all that? 1.

Much ado about booing Sign Up for Our free email newsletters If you wanted a perfect set piece to illustrate a bizarre, incoherent spectacle of politics in the Trump era, you could do worse than examine events surrounding President Trump's appearance Sunday night at the World Series and its reverberations around Washington and throughout the media. For those Americans who haven't been paying attention: Trump was roundly booed by the capacity crowd at Nationals Park in Washington, D.C., on Sunday evening, with the jeering accompanied by chants of "Lock him up!"

The Suffocation of Democracy As a historian specializing in the Holocaust, Nazi Germany, and Europe in the era of the world wars, I have been repeatedly asked about the degree to which the current situation in the United States resembles the interwar period and the rise of fascism in Europe. I would note several troubling similarities and one important but equally troubling difference. In the 1920s, the US pursued isolationism in foreign policy and rejected participation in international organizations like the League of Nations. Trump's Ukraine scandal: Who's who? Just as he was trying to move on from allegations his campaign colluded with Russians against Hillary Clinton in 2016, Trump was ramping up efforts to get Ukraine to stir up trouble for his prospective 2020 challenger Biden. He used official channels to ask the Ukrainian President to look into the Biden family, openly asking Zelensky for a favor during a phone call on July 25 and then suggested his attorney meet with Ukrainian officials. In the July 25 phone call, the Ukrainian President mentioned plans to buy US-made Javelin missiles -- which he needs to help guard against potential Russian provocations. At the very same time, Trump was sitting on nearly $400 million in aid to Ukraine, which he has argued was on hold while he leaned on European countries to give more to Ukraine. Volodymyr Zelensky, President of Ukraine

Mary Trump, Donald Trump, and the American Psyche Around the time that Trump’s aides were finding ways to cajole their charge into putting on his mask, a book began to make its way around American media outlets. Too Much and Never Enough, by Trump’s niece, Mary Trump, is both a memoir and a manifesto. One of its theses is that the mind of the president, the subject of so much fixation, is beyond fixing. Donald Trump, she suggests, is not a riddle to be answered or a mystery to be solved; he is what he is, full stop. How Stephen Miller Seized the Moment to Battle Immigration Once a lonely cause, restrictionism had grown into a mature movement — an intellectual ecosystem of sorts — with groups specializing in areas as diverse as litigation and voter mobilization. When Mr. Sessions claimed on a conference call that the Gang of Eight bill threatened jobs, an analyst from the Center for Immigration Studies was on the line to vouch for the data, and Breitbart covered it as news. When the center presented its journalism award, Mr. Miller was the speaker, and his first-name references to the Center’s staff — “all the great work that Mark and Jessica and Steve are doing”— made it clear that he felt among friends.

Fear and Anxiety Drive Conservatives' Political Attitudes Source: Lightspring/Shutterstock Peer-reviewed research shows that conservatives are more sensitive to threat. While this threat-bias can distort reality, fuel irrational fears, and make one more vulnerable to fear-mongering politicians, it could also promote hypervigilance, perhaps making one better prepared to handle an immediate threat. 1. Conservatives tend to focus on the negative article continues after advertisement

Report: President Trump's Foreign Business Holdings Present Conflicts of Interest, Possible Corruption Corruption, it increasingly appears, is inseparable from authoritarianism. It's not just that people who run or are willing to join would-be autocratic regimes lack any kind of ethical principle. It's that the money greases the wheels of the machine. Vladimir Putin's Russia is a prime example, where the leader essentially serves as a mob boss, with various vassals—the oligarchs and mafia barons—making money hand over fist in exchange for unflinching loyalty. Trump consults Bush torture lawyer on how to skirt law and rule by decree The Trump administration has been consulting the former government lawyer who wrote the legal justification for waterboarding, on how the president might try to rule by decree. John Yoo told Axios he has been talking to White House officials about his view that a recent supreme court ruling on immigration would allow Trump to issue executive orders that flout federal law. In a Fox News Sunday interview, Trump declared he would try to use that interpretation to try to force through decrees on healthcare, immigration and “various other plans” over the coming month. Constitutional scholars and human rights activists have also pointed to the deployment of paramilitary federal forces against protesters in Portland as a sign that Trump is ready to use this broad interpretation of presidential powers as a means to suppress basic constitutional rights.

Democrats have forgotten how playground bullying works Sign Up for Our free email newsletters The Democratic Party is struggling mightily to figure out how to confront President Trump's staggering corruption. Trump vs. Obama: a new theory of why Republicans and Democrats fight “Of the many factors that make up your worldview, one is more fundamental than any other in determining which side of the divide you gravitate toward: your perception of how dangerous the world is. Fear is perhaps our most primal instinct, after all, so it’s only logical that people’s level of fearfulness informs their outlook on life.” That’s political scientists Marc Hetherington and Jonathan Weiler, writing in their book Prius or Pickup, which marshals a massive trove of survey data and experimental evidence to argue that the roots of our political divides run so deep that they make us almost incomprehensible to one another. Our political divisions, they say, aren’t about policy disagreements, or even demographics. They’re about something more ancient in how we view the world. Hetherington and Weiler call these worldviews, which express themselves in everything from policy preferences to parenting styles, “fixed” versus “fluid.”

The Democracy Fix: Q&A with Caroline Fredrickson The following is an edited transcript of a conversation between Caroline Fredrickson, President of the American Constitution Society and Frank Housh, Esq., ACS Chairman of the WNY Lawyers Group and a member of National Book Critics Circle, about Ms. Fredrickson’s new book, The Democracy Fix. Ms. Fredrickson will be speaking about her book at upcoming ACS chapter events in Northeast Ohio, Chicago, and Minneapolis. HOUSH: Your book is extraordinarily ambitious in that it enumerates the history of what is effectively the right-wing compromise, or takeover, of key democratic institutions -- and then offers a fix.

Trump's sweaty Fox News interview shows his 2020 chances melting away Two generations ago, Richard Nixon sweated his way to losing the first ever presidential debate on television to a young, fit and cool John F Kennedy. It was the kind of rookie mistake you could put down to the newness of TV. So how do you explain – 60 years later – the drenching sweat that trickled down the face of the reality TV star who is now living inside the White House? Of the very few things Donald Trump is supposed to know in any modicum of detail, TV sits right at the tippity-top. There are more historic crises challenging his presidency than there are cable news channels, but that doesn’t stop him tweeting about all the TV he’s watching all day.