Mood Disorders, Depression and Anxiety, and the Gut Microbiome

Depression - Series of Articles and Resources from a Functional Medicine Perspective. The gut-brain axis - microbiome and depression — The American Microbiome Institute. Today I will be discussing a review from a little more than a year ago that discusses research that links the microbiome with stress, anxiety, and depression. 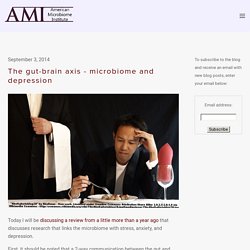 First, it should be noted that a 2-way communication between the gut and brain has already been established. The review goes on to mention studies in mice where not only are germ free mice associated with higher stress responses, but stress and anxiety early in life are associated with long-term changes in the microbiome. There was efficacy in reducing stress by treating stressed mice with probiotics. Other studies however have shown germ-free mice to have reduced stress when compared to their counterparts. Is Depression a Disease—or a Symptom of Inflammation? RHR: Is Bipolar Disorder Caused by Chronic Inflammation? 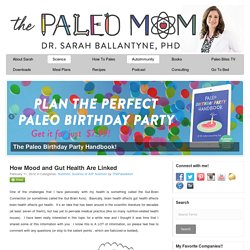 Basically, brain health affects gut health affects brain health affects gut health. It’s an idea that has been around in the scientific literature for decades (at least seven of them!) , but has yet to pervade medical practice (like so many nutrition-related health issues). I have been really interested in this topic for a while now and I thought it was time that I shared some of this information with you. I know this is A LOT of information, so please feel free to comment with any questions (or skip to the salient points , which are italicized or bolded).

The entire gut is lined by an extensive network of neurons embedded directly into the walls of our esophagus, stomach, intestines, rectum and colon. The Gut Microbiome, Anxiety and Depression: 6 Steps to Take. Diet, Depression, and the Microbiome. The Gut-Brain Connection, Mental Illness, and Disease. The Gut-Brain Axis: The Missing Link in Depression. Human Microbiota and Depression. Why Do I Feel So Blue Leaky Gut.

This is a post from the Gut Critters blog that ended November 8, 2016. Ray Medina gave permission for his material to be copied as long as it was attributed to him and not used for commercial purposes. – kiraonysko

Gut bacteria help regulate serotonin levels — The American Microbiome Institute. The researchers first discovered that germ-free mice produced substantially less serotonin than normal mice in their colons, but not in the small intestines, suggesting the importance of the colon microbiome in serotonin production. 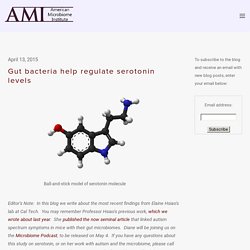 The scientists then investigated the levels of each enzyme responsible for serotonin production and pinpointed one called TPH1 that was produced at much lower levels in the germ free mice colons. When the germ-free mice were given TPH1 their serotonin levels returned to normal, and when regular mice were given antibiotics their serotonin levels dropped. Serotonin Availability Altered By Gut Microbiota Recognition Receptor. TLR2, a critical detector of the microbiota found in the intestine, regulates serotonin levels, scientists at the University of Exeter Medical School and University of Zaragoza in Spain have found. 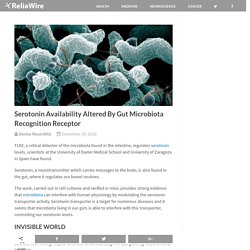 Serotonin, a neurotransmitter which carries messages to the brain, is also found in the gut, where it regulates our bowel routines. Exploring the Relationship Between the Gut Microbiome and Depression. Gut Problems Cause Mental Issues (Anxiety, Depression, Schizophrenia) Here at Fix Your Gut we have discussed at length how gut health affects mental health. 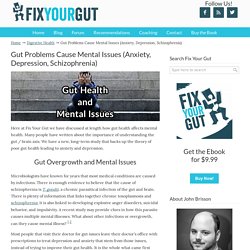 Do Probiotics Help with Depression. Benefits of Probiotics may include Depression Treatment. Probiotics are the latest buzzword in nutrition. 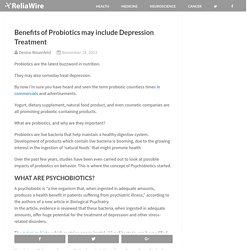 They may also someday treat depression. Probiotics may be able to prevent depression — The American Microbiome Institute. Clinical studies have shown that probiotics can decrease anxiety, improve mental outlook, and induce positive mood changes and outlook. 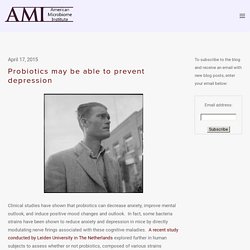 In fact, some bacteria strains have been shown to reduce anxiety and depression in mice by directly modulating nerve firings associated with these cognitive maladies. A recent study conducted by Leiden University in The Netherlands explored further in human subjects to assess whether or not probiotics, composed of various strains of Bifidobacteria and Lactobacilli could specifically modulate cognitive reactivity to sad mood, a well-characterized indicator for vulnerability to depression.

In brief, cognitive reactivity is defined as a series of dysfunctional patterns of thinking prompted by subtle mood changes, such as rumination, aggression, and hopelessness. Anxiety Disorders. Anxiety and the Microbiome. The cause of some people having high anxiety (without a cause) is typically believed to be a combination of genetics (DNA), environment and the microbiome. 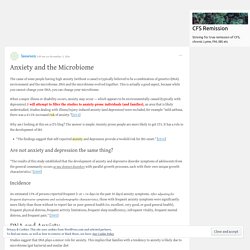 DNA and the microbiome evolved together. This is actually a good aspect, because while you cannot change your DNA, you can change your microbiome. When a major illness or disability occurs, anxiety may occur — which appears to be environmentally caused (typically with depression). I will attempt to filter the studies to anxiety-prone individuals (and families), an area that is likely understudied.

Studies dealing with illness/injury induced anxiety (and depression) were excluded, for example “mild asthma, there was a 43.5% increased risk of anxiety.”[2014] RHR: The Functional Medicine Approach to Anxiety. Anxiety can significantly impact quality of life. 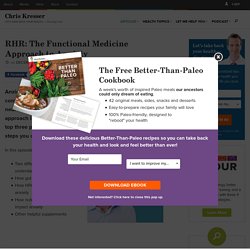 Adam: Hi Chris. Can Poor Digestion Cause Panic Disorder? Part 1: CCK. There are several endogenous chemicals affect digestion including: SerotoninCCKGIPGastrinSecretinMotilinDopamineAcetylcholineGabaGhrelinLeptinHistamineMelatonin Many of the chemicals on that list are neurotransmitters that are not at all surprising. 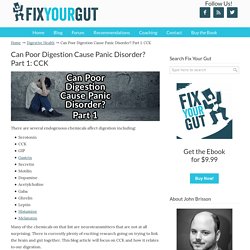 There is currently plenty of exciting research going on trying to link the brain and gut together. This blog article will focus on CCK and how it relates to our digestion. Your heart begins to race. Does fermented food consumption lower social anxiety? Fermented foods are not included in the recently revised ISAPP definition of probiotics, since the bacteria they contain are uncharacterized. But scientists are nevertheless studying how these foods may affect health, including brain function. This blog post covers a correlational study on fermented food consumption and social anxiety. The study found that young adults who consumed more fermented foods and fruits/vegetables, and those who engaged more frequently in exercise, had lower levels of social anxiety. Young adults who already expressed higher levels of neuroticism had less social anxiety when they consumed fermented foods.

Despite the significant limitations of this study — chiefly, that causality cannot be inferred — its findings warrant further investigation. Feeling Anxious? Have a Pickle. I’m from northern Vermont, and am the descendant of a long line of uptight Puritans and taciturn ice fishermen. Chattiness is not our bag. At parties, we’re big on nail-biting reticence and we tend to have an over-developed concept of personal space. A lot of us, as kids, hid behind the couch when company came to call. Fish oil may be important to altering the microbiome, reducing anxiety — The American Microbiome Institute. Last week we published a blog on the gut-brain axis, and the various associations between brain health and the gut microbiome. One of the ailments we discussed was depression, which is often studied in mice by inducing early life stress on the mice.

One way to do this is by separating mice from their mothers for hours at a time at a young age. The Maternal Separation model, as it is known, causes stress and anxiety in these mice, but more importantly, research has shown that it creates a dysbiosis of their gut microbiomes as well. Many scientists believe the dysbiosis may be implicated in causing some of the stress phenotypes, and so reversing this dysbiosis could have therapeutic value. Treating the Mood Spectrum.