Prisons in the US and the UK

Capital punishment - In defence of America’s prison-industrial complex. ON A CLOUDLESS October day, the early autumn sun still scorching, prisoners line up outside the education building of Saguaro Correctional Centre in Eloy, Arizona. 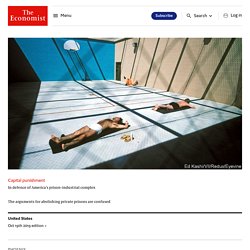 They joke with the corrections officer on duty as she inspects their books. - The Washington Post. Jail vs Prison - What's ACTUALLY The Difference? Mass Incarceration: The Whole Pie 2020. By Wendy Sawyer and Peter Wagner March 24, 2020Press release Can it really be true that most people in jail are being held before trial? 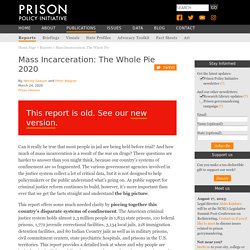 And how much of mass incarceration is a result of the war on drugs? These questions are harder to answer than you might think, because our country’s systems of confinement are so fragmented. The various government agencies involved in the justice system collect a lot of critical data, but it is not designed to help policymakers or the public understand what’s going on. As public support for criminal justice reform continues to build, however, it’s more important than ever that we get the facts straight and understand the big picture. This report offers some much needed clarity by piecing together this country’s disparate systems of confinement. Slideshow 1. This big-picture view allows us to focus on the most important drivers of mass incarceration and identify important, but often ignored, systems of confinement. Slideshow 2. 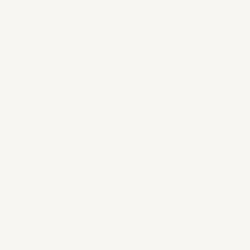 According to the Bureau of Justice Statistics, the annual cost of mass incarceration in the United States is $81 billion. But that figure addresses only the cost of operating prisons, jails, parole, and probation — leaving out policing and court costs, and costs paid by families to support incarcerated loved ones. 'We need help': Inmates describe prison system unprepared for coronavirus. Some inmates at Alabama state prison facilities asking for help amid the novel coronavirus pandemic highlighted what they described as broader threats inside the U.S. prison system. 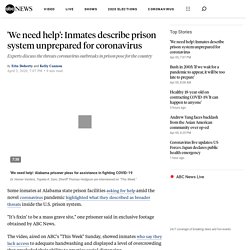 "It’s fixin’ to be a mass grave site," one prisoner said in exclusive footage obtained by ABC News. The video, aired on ABC's "This Week" Sunday, showed inmates who say they lack access to adequate handwashing and displayed a level of overcrowding that precluded their ability to practice social distancing. "My thing for the outside world is, help. Help. Help for the overcrowding, help for sanitary purposes, help for a release mechanism. Release inmates or face jail pandemic, say prison governors. Prisoners should be released in order to prevent UK jails being overwhelmed by the coronavirus pandemic, the head of the Prison Governors Association has told the Guardian. 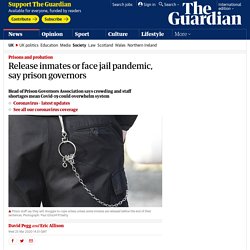 Andrea Albutt said prisons were facing “unprecedented risk” and the release of some prisoners would help prevent disorder and slow the spread of the virus. On Tuesday the Ministry of Justice announced that all visits to prisons would be suspended and inmates would be confined to their cells in an effort to prevent the spread of Covid-19. Albutt warned that a combination of prison overcrowding, prisoner lockdown and staff shortages as a result of prison workers needing to isolate themselves meant that the system was facing unprecedented pressure. “Overcrowding, poor regime, reduced contact with family because we’re not having visits anymore – these are all things that can introduce instability,” she said.

Albutt said jails were already severely overcrowded, with prisoners sharing cells designed for a single person. Prisons ‘could see 800 deaths’ from coronavirus without protective measures. Failure to protect the most vulnerable inmates in the UK prison system from coronavirus could result in more than 800 avoidable deaths, experts have warned. 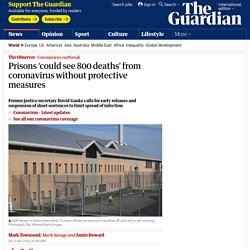 Provisional estimates from epidemiologists at University College London suggest that uncontrolled outbreaks of infection could lead to the deaths of up to 1% of the prison population but that this could be substantially reduced if steps are taken to protect elderly prisoners and those with chronic illnesses. Prisons have been a flashpoint in many countries’ battles against the virus, with several, including Spain, the US and Iran, ordering the release of many inmates to lessen the risk of transmission among detainees and jail staff. In Wuhan, the Chinese city where Covid-19 emerged three months ago, more than 800 prisoners were reportedly infected. Coronavirus is a disaster for UK prisons. Releasing the harmless now will save lives. The Prisoners’ Advice Service (PAS), a charity of which I am a trustee, asked the Ministry of Justice (MoJ) last week to release groups of prisoners in order to lessen the impact of coronavirus in the penal estate. 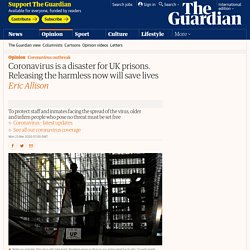 They have done it in Iran, so why not here? The UK government has already announced that it intends to ease pressure on prisons by increasing the number of prisoners released on home detention curfew with a tag. But the PAS is calling for those inmates who are old or infirm; or have long passed their tariffs – if they are serving a wretched imprisonment for public protection (IPP) sentence; or simply do not pose a threat, to be released immediately.

These include the more than 1,700 prisoners, mostly men, aged 70 and over – some of whom are 80 or older, with a growing number in their 90s. When serving time, I experienced a few hairy moments, occasions when I felt my actions would lead to my physical harm. A prisoner in a Midlands jail complained of severe pains in his leg.