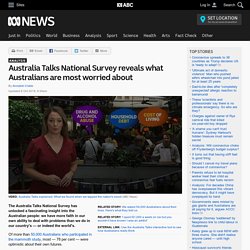 Of more than 50,000 Australians who participated in the mammoth study, most — 78 per cent — were optimistic about their own futures. But they were much less hopeful for the future of the nation at large (51 per cent optimistic), and frankly despairing about where the world's headed, with only 30 per cent hopeful for the future of the globe. In a hyperactive and increasingly tribalised world, it seems the fear of what lies outside our own sphere of control is far worse than the adversity we face personally.

So what is affecting us personally? Climate change was the leading worry; 72 per cent of respondents said it would affect their lives. The results are revealing on many levels. Federal election 2019: Here's where the major parties stand on education - Australia Votes - Federal Election 2019 - Politics. Updated about 2 hours agoMon 6 May 2019, 10:46pm Education is always a major election issue, and after years of school funding wars it will once again be at the forefront of many voters' minds. 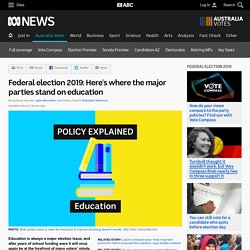 A traditional strength area for Labor, both major parties are pitching themselves as having the best strategy for improving declining student results. Early education The Coalition is spending about $450 million to give children access to 15 hours of preschool education a week until the end of 2020. Labor has promised to commit permanent funding for preschool, replacing the current year-to-year funding arrangement, and extend it to three-year-olds from 2021. The Opposition describes the plan as a major economic and social reform, however the Coalition has criticised the price tag ($9.8 billion over 10 years) and says it is more important to improve four-year-olds' attendance rates first. 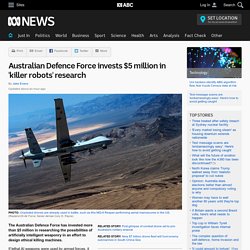 Key points: The ADF invests millions into researching how drones and other weapons could make decisions on the battlefieldDespite the challenges, the lead researcher says it could make wars more ethicalIt will be the largest ever investment in AI ethics, according to the UNSW If lethal AI weapons were used by armed forces, it would fundamentally shift the decision to kill from the hands of soldiers into the those of designers and engineers. According to UNSW Canberra, a partner in the six-year project, it was the largest ever investment in AI ethics. Lead researcher Dr Jai Galliot said it would investigate the current values of people who, in the future, could be deciding when a machine kills.

"The accountability is shifting in a pretty significant way. "

Sport issues. Population growth on agenda at Treasurers' meeting, as Federal Government tries to entice migrants to regional areas - Politics. Updated about 6 hours agoThu 7 Feb 2019, 3:23pm The Federal Government will try to get the states and territories to agree to a plan for population growth at a meeting of treasurers in Canberra today, but some states are sceptical about the Coalition's commitment to delivering on its promises. 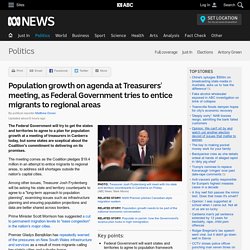 Key points: Federal Government will want states and territories to agree to population frameworkVictoria and Queensland say they cannot be forced into such a deal when funding for services is not boostedCoalition to announce close to $20 million to attempt to boost regional skilled migration The meeting comes as the Coalition pledges $19.4 million in an attempt to entice migrants to regional areas, to address skill shortages outside the nation's capital cities.

Prime Minister Scott Morrison has suggested a cut to permanent migration levels to "ease congestion" in the nation's major cities. The deadly Spanish Flu and a dramatic border closure remembered 100 years on. Updated earlier today at 7:19amTue 5 Feb 2019, 7:19am While a proposed border wall in the United States dominates news today, historians say it has been a century since a lesser known border closure left many Australians stranded and created chaos along a state line. 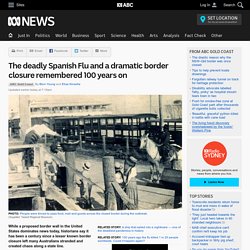 At the end of January 1919 authorities made the drastic decision to suddenly close the New South Wales and Queensland border to stop the spread of the deadly Spanish Flu into the northern state. "The Spanish Flu was amazing. We just don't realise the scale — it killed 50 million people worldwide," Tweed Regional Museum curator Erika Taylor said. She said the absolute devastation of the flu led to the decision to quickly close the gate at the border, which caused immediate problems for residents in the border towns of Coolangatta and Tweed Heads. "They just shut it at 2pm on a day at the end of January," Ms Taylor said.

"Of course we all know Twin Towns is so close, the border is so fluid. Australian Border Force accused of targeting women suspected of fleeing Saudi Arabia. Posted about 4 hours agoSun 3 Feb 2019, 8:09pm Witnesses and activists have accused Australian Border Force officers of targeting Saudi Arabian women whom they suspect will apply for asylum and blocking them from entering the country when they arrive at Australian airports. 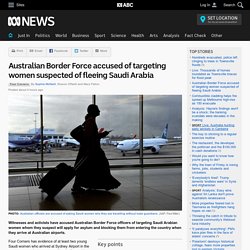 Key points. Corruption probe into donations made by Labor-linked restaurateur, friends and family. Posted about 4 hours agoSun 3 Feb 2019, 8:12pm A corruption watchdog is asking questions about a Chinese billionaire property developer, a state Labor politician, a former head of the NSW arm of the party and $100,000 in mainly cash donations made at a 2015 Labor Party dinner, an ABC investigation can reveal. 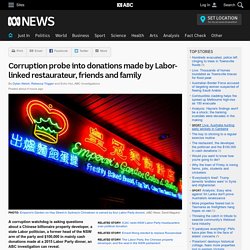 Key points: ABC can reveal 20 donations totaling $100,000 made on the same day to NSW Labor are target of corruption probeMost of the donors are connected to a well-known Sydney restaurateur familyCorruption watchdog examining "straw donor" theory and asking questions about billionaire property developer The probe by the NSW Independent Commission Against Corruption (ICAC) burst into the public arena in December, when officers raided the NSW ALP headquarters over a fundraising dinner on March 12, 2015.

Bill Shorten, Chris Bowen and a who's who of federal and state Labor politicians attended the dinner, which was just over two weeks before the NSW election. Referees copping 'vulgar' abuse on a regular basis at Canberra football games. Updated about 9 hours agoFri 11 Jan 2019, 2:42pm On the pitch Delfina Dimoski has faced rape threats, death threats and verbal abuse — and even after finishing her day refereeing football games she has been stalked and harassed on social media for the decisions she makes. 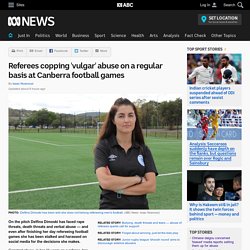 Key points: Capital Football is moving to curb referee abuseA female referee reports receiving rape threats, being stalkedFootball in Canberra aims to attract more female referees Constant abuse, in her 11 years as a referee, has given her a thick skin, but in recent seasons violent threats have left her scared to do her job, and made her consider quitting the game she loves. Cronulla riot 'hero' Craig Campbell still paying the price 13 years on. Updated about 7 hours agoTue 11 Dec 2018, 2:03pm For many people, Craig Campbell is a hero. 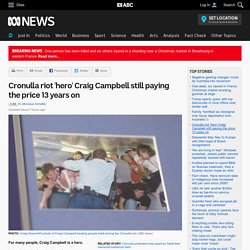 It was during the Cronulla riots, 13 years ago on Tuesday, that he dispersed a crowd that was beating up two young Middle Eastern men on a carriage at the train station. "The crowd was sort of circulating around, chanting and cheering," witness and photographer Craig Greenhill told 7.30. "And then there was two guys who decided to go in there and attack them. How the same-sex marriage vote changed the lives of queer teens in country towns. Updated about an hour agoThu 15 Nov 2018, 2:53am If you are reading this you might be one of the 61 per cent of Australians who voted Yes to legalise same-sex marriage. 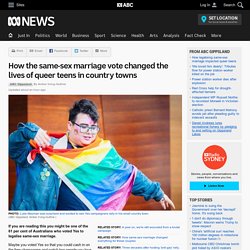 Maybe you voted Yes so that you could cash in on the free champagne and watch two people you love finally tie the knot. The My Health Record opt-out deadline is tomorrow night. Here's what you need to know - Science News - ABC News. The deadline to opt out of My Health Record is rapidly approaching. If you don't make a choice by Thursday night (Friday 3:00am AEDT, to be exact), you'll be among the estimated 17 million Australians for whom a record will be automatically created in the Government's online database of health information. The five-month opt-out period has been tumultuous. Since July, software analysts, unions and family violence charities have raised privacy and security concerns about the system, while health groups have talked about its clinical benefits. If you're confused, that's understandable. Some people were shocked to find they already had a record, and the opt-out deadline was pushed back one month. Kristallnacht survivor Andy Factor warns of rising antisemitism on 80th anniversary.

Updated about 3 hours agoThu 8 Nov 2018, 9:55pm Their only warning was a phone call. "They're smashing windows. Don't go outside. The Nazis are here. " Andy Factor can still hear the shattering sound that pierced the silence of the back room where his family was huddled on what would later become known as "kristallnacht" — the night of broken glass. It was a turning point in the Nazi's persecution of Jews as Germans openly rioted across the country on November 9, 1938, targeting Jewish homes and businesses while police watched on. Now, exactly 80 years since that night, there is another sound that fills Andy with fear: the rising and reinvigorated chorus of white nationalism and antisemitism that is spreading across parts of Europe and America.

Racism 'alive and it's kicking': Indigenous commissioner challenges new race appointee's stance. Updated yesterday at 7:03amSun 7 Oct 2018, 7:03am Aboriginal and Torres Strait Islander social justice commissioner June Oscar has declared that racism in Australia is "alive and it's kicking" in response to comments by the nation's newly appointed race discrimination commissioner that Australia is not a racist country. Key points: June Oscar travelling across Australia to hear from Aboriginal and Torres Strait womenIndigenous people are often "watched and followed" in supermarketsAboriginal communities are being punished under a "racist" employment scheme "I'm hearing from women and girls across the country … that racism is one of the key emerging issues," she said.

Emergency departments in 'crisis' as mental health patients left waiting: new report - Health - ABC News. The emergency physician remembers when the "young and proud" Aboriginal man in his 20s was brought into the emergency department by his father. Key points Key points Patients with acute mental health problems wait longer to be assessed and treated in the EDMental health patients twice as likely to leave ED "at their own risk" before finishing treatmentExperts call for greater investment in community mental health services. The Catholic school funding deal is hunger relief for the well fed.

My Health Record: 900,000 Australians have opted out of database, Senate inquiry told. Posted about 4 hours agoMon 17 Sep 2018, 9:36pm The number of Australians who have opted out of My Health Record since July 16 has been revealed. Australian Digital Health Agency (ADHA) head Tim Kelsey told a Senate inquiry into the medical database system on Monday evening that as of September 12, the opt-out rate was about 3 per cent — roughly 900,000 people. Crime. Tech/Social Media.

Q&A: John Marsden says he would not have written the Tomorrow series today. Sydney's Wayside Chapel sees a changing of the guard with a new 'angel' in charge. 'I've got to save my mum': Boy recognised for bravery in domestic dispute. Baby boomers move in with adult kids as housing market displays intergenerational role reversal. Thunder versus Sea Shepherd: The true story of the world's longest ship chase - RN.

How a family can reduce their waste to just one bag a week. Woman, 86, with dementia is signed up to energy account and issued $2,500 power bill. How do we stop women getting slapped in the street? Make it a hate crime. Nigerian farmers are under attack, so why don't we hear about it? Dresses for the drought: Sisters start movement to donate formal dresses to affected teenagers. Drought relief: The dos and don'ts of helping Australian farmers and rural communities with donations - ABC Rural - ABC News.