Women speak out against controversial religious Sydney drug and alcohol rehabilitation centre the Healing House - ABC News. Five days into her stay at the Healing House, Rania Bazzi called her lawyer in hysterics. 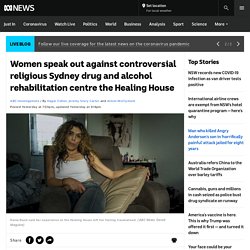 Key points: A controversial rehabilitation centre in Sydney has been criticised for leaving some women feeling traumatised after undertaking rehab programs while on bail The Healing House in Sydney aims to rehabilitate women using fringe religious practices. Former residents have told the ABC they were exposed to bizarre pseudo-religious teachings and a leader who speaks in tongues "I was begging and pleading with him to please, somehow, can we get a variation on my bail. Please, you've got to get me out of here. " Fresh from 13 years in jail and still recovering from addiction, Ms Bazzi had been placed in the drug and alcohol rehabilitation centre as part of the conditions of her bail. "It was an absolute nightmare. The centre has no staff, nor any qualified medical or mental health professionals on site. If women at the Healing House fail to complete the program, they can be sent back to prison. Hillsong Church buys Melbourne's iconic Festival Hall - ABC News. 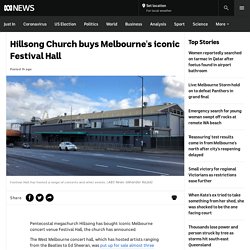 The West Melbourne concert hall, which has hosted artists ranging from the Beatles to Ed Sheeran, was put up for sale almost three years ago. At the time, owner Stadiums Limited said it couldn't compete with newer venues. In a YouTube video announcing the purchase on Sunday, Hillsong state pastors Tim and Nicola Douglass said the West Melbourne building had been bought after a years-long search for a home in the city. "This journey of purchasing this incredible facility started about 18 months ago," Mr Douglass said. "We just happened to hear about that it was for sale and started inquiring, thinking that it was a long shot. Mr Douglass said the proposal appeared to fall through around Christmas last year, but "through a roller coaster of events", the church managed to buy the building this year. Religions are turning to technology to chase youth, but can they compete with Facebook? - ABC News.

Hillsong is known for its spirited, communal worship and stadium performances — but you don't need to turn up at church to be part of it. 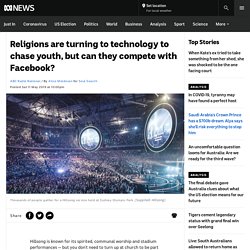 Services are streamed online, pastors are available to talk in real-time, and you can even submit a prayer request using your mobile phone. Now the church is building an incubator to nurture young, talented digital natives who would otherwise look to established tech companies for work. It's not the only religious group growing its digital focus: faith-based tech is an area of interest across the religious spectrum. But, as other faith start-ups have found, competing with established social media companies comes with big challenges. Building an incubator Hillsong is, of course, active on the established platforms of Facebook, Instagram and Twitter. "We stream our service online and people chat while the service is on," Rob Beach, the global chief information officer with Hillsong, told RN's Soul Search.

The 'quick and dirty' version. How Hillsong and other Pentecostal megachurches are redefining religion in Australia - ABC News. It is Sunday morning at Hillsong's megachurch in the Sydney suburb of Alexandria, and Pastor Natalie Pingel pauses mid-sermon to conduct an impromptu Dwayne "The Rock" Johnson look-a-like contest. 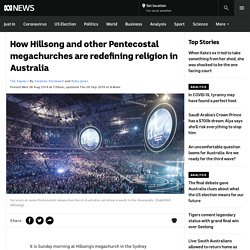 Key points: Pentecostal churches are growing, while other Christian denominations are decliningThe denomination began in Los Angeles in the early 1900s before arriving in AustraliaModern Pentecostals in Australia often embrace 'prosperity doctrine' She selects a group of buff parishioners and members of the band to line up on stage. Each takes turns flashing the crowd the actor's signature raised eyebrow, to approval and gushing laughter. Pastor Pingel then leads the congregation in prayer, the band plays anthemic rock music and the big screens either side of the stage light up with suggestions for what people can pray for. The suggestions include financial stability, luck with job applications and visa approvals.

How popular is Pentecostal Christianity? "I see a bunch of old ladies. Hillsong and C3 started in Australia — and now they're growing in popularity in Brazil - ABC News. Brazil is home to the world's largest Catholic population, but the rise of Pentecostalism is drawing young Brazilians away from traditional pews, and toward charismatic, "club-like" mega-churches. 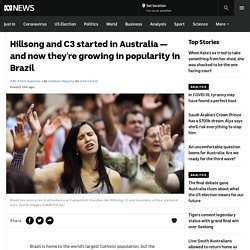 And according to Cristina Rocha, a Brazilian-born cultural anthropologist at Western Sydney University, Australia plays an important role in this trend. Over the past two decades, Professor Rocha has been researching the intersections between migration and religion, exploring why so many Brazilians travel to Australia. "More and more international students coming from Brazil have said, 'I came here because of Hillsong,'" she says. But Hillsong Church, which was established by husband and wife pastors Brian and Bobbie Houston in Sydney in 1983, isn't the only drawcard. Professor Rocha discovered that C3, Australia's second-largest Pentecostal church, has also amassed a large Brazilian cohort. "[Both churches] focus on youth culture," she explains.