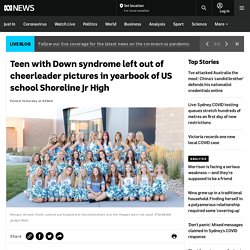 Morgyn Arnold posed with her cheer team, but an image not featuring her was usedHer sister says she was upset when she learned she was not in the yearbookShoreline Junior High has apologised for excluding Morgyn from the photographs Morgyn Arnold had been excited to see the pictures after she had participated in a photo session with her friends in the cheer squad, for which she acted as manager. But her sister, Jordyn Poll, said the 14-year-old Morgyn was "devastated" when she saw the school yearbook featured a different picture — one of everyone in the cheer squad except for her. The alternative photo was also used by Shoreline Junior High School on its social media pages, which have now been purged amid an online backlash. Ms Poll said she believed the decision to use the image without Morgyn stemmed from her disability. Darwin lawyer Alistair Wyvill cleared of misconduct after claiming judge was 'politically partisan' - ABC News. A prominent Darwin barrister has been cleared of professional misconduct and his fears about a Supreme Court judge being "politically partisan" have sufficient basis, a tribunal has found. 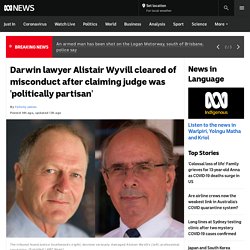 Key points: Law Society NT has lost a long-running fight against Alistair Wyvill SCA tribunal found a judge's comments may have implied a "favourable view" of the Country LiberalsMr Wyvill acted for former Labor leader Delia Lawrie at the Stella Maris inquiry Alistair Wyvill SC acted for the Northern Territory's former Labor leader Delia Lawrie during the controversial Stella Maris inquiry in 2013 and 2014, which was initiated by the Country Liberals government.

Spies in our suburbs. Free speech. Democracy. China's Confucius Institutes have spy agencies and governments increasingly alarmed - China power. Updated Sun at 12:09amSun 10 Mar 2019, 12:09am 阅读中文版本 On the evening of July 24, 2014 as academics arrived in the Portuguese city of Braga for a Chinese studies conference, staff from the Chinese Government-run Confucius Institute were at a nearby apartment hurriedly ripping pages from conference programs. 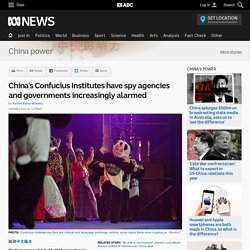 Key points: Spy agencies are briefing universities about risks to research and intellectual propertyUS senate report suggest Confucius staff be registered as foreign agentsHost universities insist there are no problems The programs had been stolen earlier that day from conference hosts the European Association of Chinese Studies (EACS) on the orders of the global head of the Confucius Institute because they included material about another sponsor, which happened to be a Taiwanese institution. Last week, an eight-month US Senate sub-committee investigation released its final report into the activities of Confucius Institutes on US campuses.

Spy agencies warn universities. A history of compulsory voting in Australia (and why we are so good at elections) Opinion Posted about 3 hours agoThu 28 Feb 2019, 9:13pm In the middle of the 19th century the south-eastern mainland states of Australia gave every man a vote, and the secret Australian ballot transformed voting practices. 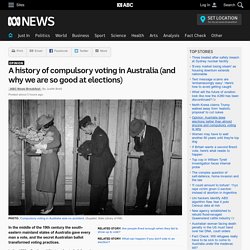 In the 1890s, South and Western Australia followed New Zealand in giving women the vote. 'Hockey owes me': Liberal mate 'helped set up' Helloworld meeting with ambassador to US. Updated earlier today at 9:14amThu 21 Feb 2019, 9:14am A former Helloworld executive who met with Australia's ambassador to the United States Joe Hockey to discuss embassy travel arrangements says the meeting was set up by the company's chief executive and Liberal Party treasurer Andrew Burnes. 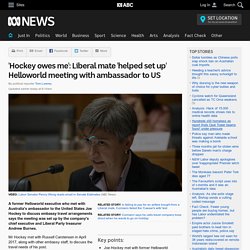 Key points: Joe Hockey met with former Helloworld executive in Washington in 2017There are claims the Helloworld boss and Liberal Party treasurer arranged the meeting, saying "Hockey owes me". Mr Hockey owns more than $1 million in Helloworld shares Mr Hockey met with Russell Carstensen in April 2017, along with other embassy staff, to discuss the travel needs of his post.

Mr Carstensen contacted a Senate committee, which had been grilling Department of Foreign Affairs and Trade (DFAT) officials over the meeting, to give his version of events. Top End businesses hope US Marine increase will fire up flatlining Darwin economy. Posted about an hour agoWed 20 Feb 2019, 8:12pm A US Marine rotation bound for Darwin in April could bring with it more soldiers, more aircraft and — officials are hoping — a lasting upswing for a flatlining Top End economy. 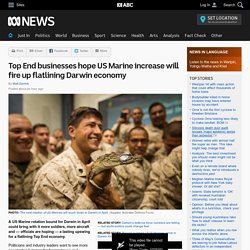 Key points: Some NT businesses have scored contracts on work associated with the US MarinesThe 2019 US Marine rotation to the Top End is expected to be one of the biggest on record, and will include a large aircraft elementBusiness and government officials are hoping the US troops will increase their procurement of NT supplies Politicians and industry leaders want to see more cooperation between the foreign troops and Northern Territory businesses, especially if growing tension in the South China Sea means more US soldiers are based in the region in the future. Michaelia Cash insists she provided AWU raids witness statement despite AFP saying she didn't. Updated about 2 hours agoTue 19 Feb 2019, 9:52pm Federal Small Business Minister Michaelia Cash insists she has provided a witness statement to police about raids on union offices — despite the Australian Federal Police (AFP) saying she did not. 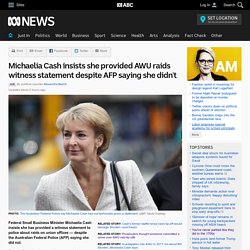 Key points: Michaelia Cash said she fully cooperated with the Australian Federal PoliceThe Senator claimed "you [couldn't] get better evidence than what I provided... under oath"However, the police insist Senator Cash was not forthcoming with a formal statement Senator Cash has been under pressure because her staff tipped off the media that police were raiding the Melbourne offices of the Australian Workers' Union back in 2017. The raids are now the subject of a civil court case and Senator Cash appeared as a witness last week. Chinese billionaire Huang Xiangmo wants political parties to pay back his donations after failing in citizenship bid. Updated about 11 hours agoFri 8 Feb 2019, 2:16pm A Chinese billionaire who has been prevented from returning to Australia has asked political parties to return the millions of dollars in donations he's made. 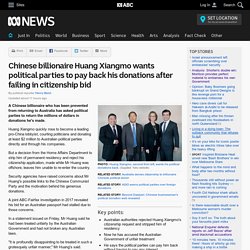 Australian authorities rejected Huang Xiangmo's citizenship request and stripped him of residencyNow he has accused the Australian Government of unfair treatmentHe says the political parties can pay him back without having to pay any interest Huang Xiangmo quickly rose to become a leading pro-China lobbyist, courting politicians and donating at least $2 million to Australian political parties directly and through his companies. But a decision from the Home Affairs Department to strip him of permanent residency and reject his citizenship application, made while Mr Huang was offshore, leaves him unable to re-enter the country. Security agencies have raised concerns about Mr Huang's possible links to the Chinese Communist Party and the motivation behind his generous donations. China's multi-billion dollar media campaign 'a major threat for democracies' around the world - China power. 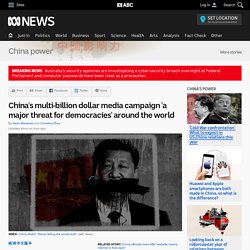 If populism speaks for ordinary people, why does it have a bad reputation? Opinion By Octavia Bryant and Benjamin Moffitt Posted about 3 hours agoTue 5 Feb 2019, 8:00pm No doubt thanks to Donald Trump, Brexit and a string of anti-establishment leaders and parties in Europe, Latin America and Asia, everyone seems to be talking about populism. 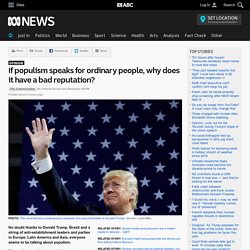 But populism is nothing new. Banking royal commission delivered a manifesto for political action, so when will we see it? Analysis. Darwin Turf Club provided $3.5m government guarantee to build drinking, gambling venue. Posted Fri at 11:54pmFri 1 Feb 2019, 11:54pm The Territory Government is providing a multi-million dollar guarantee to see a new sports bar with gaming machines built, despite its heavily touted aspirations to curb anti-social behaviour. Key points: The NT Government guarantee will help the turf club build its new Silks ClubThe venue is expected to generate $2m in gambling taxes annuallyThoroughbred Racing NT will have received almost $35m over three years in government grants by the end of June Documents recently made public show that in July last year a $3.5m government guarantee for the Darwin Turf Club was extended to facilitate the construction of its new Silks Club. This means if the Turf Club defaults on a loan for the new venue, the NT Government will repay all of its financial obligations.

The new Silks Club will house a sports bar, beer garden, restaurant, TAB and gaming machines and is expected to generate $2 million in gambling taxes annually. Invasion Day protests held around country as debate over Australia Day continues. Updated yesterday at 7:49amSat 26 Jan 2019, 7:49am Thousands of protesters have gathered around the country, calling for changes to the way the nation marks Australia Day. Key points: Thousands gathered at Victoria's Parliament House to protest Australia Day this morningSome wanted a date change, others called for the holiday to be abandonedAbout two dozen people gathered to protest Australia Day on London's Westminster Bridge January 26 marks the anniversary of Captain Arthur Philip arriving with the First Fleet in Port Jackson, New South Wales, a date now seen by many Aboriginal and Torres Strait Islander people as "Invasion Day" or "Survival Day".

Those at Saturday's rallies said the day marks the theft and dispossession of Indigenous people, and should not be celebrated. They gathered by the thousands throughout Australia, holding up banners on the steps of Parliament House in Victoria, marching through Hyde Park in Sydney and converging on Brisbane's CBD. Australia Day: What do Australians think about celebrating the nation on January 26? Posted yesterday at 7:39amSat 26 Jan 2019, 7:39am Every year Australians debate over whether to celebrate Australia Day on January 26. The date marks the anniversary of the First Fleet's arrival in Sydney. But to many Aboriginal and Torres Strait Islander people, it represents the beginning of the loss of their land, people and culture.

A number of alternative dates have been proposed for Australia Day over the years, but the holiday remains unchanged. Bungaree was the first Australian to circumnavigate the continent, but he's less well known than Matthew Flinders. Updated yesterday at 6:58amFri 25 Jan 2019, 6:58am British explorer Matthew Flinders — whose body has been found under London's Euston station — is famous for being the first person to circumnavigate Australia. But what is less well known is that among his crew on the iconic voyage was an Indigenous Australian.

Australia Day can be a time for hope, not resentment. Analysis. Australia Day citizenship ceremony provides newest Aussies a place to call home. Updated 5 minutes agoFri 25 Jan 2019, 11:14pm. Luring back the dead with tequila, cigarettes and mole: Mexicans mark Day of the Dead in Australia - RN. Party's over: In a nation of cynics, we're flocking to the fringe. 'Do I feel Aussie?': What it means to be a third culture kid - RN. Nigerian family find their home in Orange as Federal Government looks at regional migration scheme. By Stephanie Gardiner and Micaela Hambrett. Australia's 'golden age of citizen science': your chance to take part. The black cop who infiltrated the KKK - RN. Banking royal commission: It could get a lot worse for the banks as the focus turns to superannuation. Zita Stark is building a community, one English class at a time. Young Archies 2018 finalists feature family love.

Picnic Day 2018 and 2019 - PublicHolidays.com.au. Man collects one tonne of hairdressing foil scraps in personal war on waste. Thai cave rescue: Out of the cave but no place to call home for three of the rescued boys. Drovers say Australia's legendary outback stock routes in danger of collapse. Huawei's history in Britain may help explain why Australia is so nervous - Politics. How are Ballarat's bellringers connected to Australia's first political assassination attempt? Kevin Joseph's 'honour killing' a symptom of women's disempowerment in Kerala, India.

Young Australians are engaged in political issues, but unsure how democracy works. 'There's a generation kicking back': Hip-hop show explores racism and growing up Asian-Australian. Fatma Elzeim: How grieving mother built the network of mums paying it forward. Teacher resources to match the Australian cross-curriculum priorities - Creative Spirits. Issues. Civics and Citizenship Links. Humanities and Social Sciences. What does it mean to belong in Australia? Making of Modern Australia. Titled.