Land. Invaders and pests. Nuclear. Pollution. Hobart residents opposed to Mount Wellington cable car learn how to protest. Updated 38 minutes agoSun 3 Mar 2019, 9:39pm In a cosy pub at the foot of kunanyi/Mount Wellington, around 100 people gathered to learn a new art — the art of being an activist. 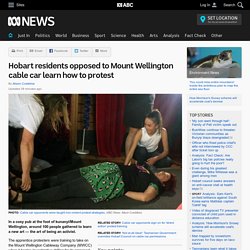 At least 100 protestors said they would take action as soon as drilling began on kunanyi/Mount WellingtonHobart City Council Alderman Jeff Briscoe said drilling could begin at any timeThe council's parks committee will meet today to discuss conditions it wants added to the MWCC permit The apprentice protesters were training to take on the Mount Wellington Cableway Company (MWCC) when it begins investigative drilling for its proposed cable car development. Does heat help or hinder solar panels? Updated about 9 hours agoSat 2 Mar 2019, 2:37pm The future of solar energy in Australia has never looked brighter. 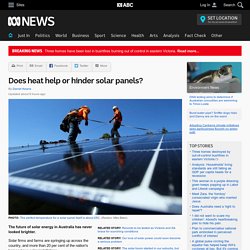 Key points: Demand for electricity is expected to increase in parts of Australia this weekendExperts say solar panels become less efficient in extreme heatThe perfect temperature for a solar panel is about 25C Solar firms and farms are springing up across the country, and more than 20 per cent of the nation's homes have solar installations. There is also largescale investment by state governments in home battery schemes which capture energy generated by rooftop panels, with the aim of driving down household power bills. But despite their growing popularity, there are still some lingering misconceptions about how solar cells work, especially in very hot weather. "A solar panel is a bit like the silicon chip inside your computer, if it gets too hot it doesn't work quite so well," University of WA resources scientist Ray Wills said. 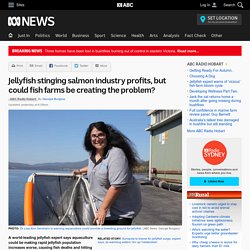 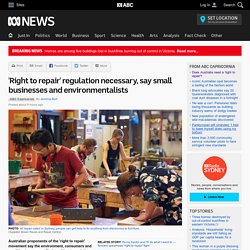 An Australian environmental charity has celebrated Clean Up Australia Day weekend by opening a new facility to help members of the public repair electronics. The Bower Reuse and Repair Centre is a Sydney-based not-for-profit, which provides facilities and guidance for people to fix, rather than discard, goods. Manager Guido Verbist, one of the volunteers behind the 20-year-old charity, said today's disposable society had significant environmental implications. Tourism Queensland chair faced perceived conflict of interest in national park tender. Updated about 6 hours agoSat 2 Mar 2019, 11:07pm A controversial tender to allow companies to lease land and build eco-accommodation in Queensland national parks has been subject to a perceived conflict of interest involving the chair of Tourism Queensland (TEQ). 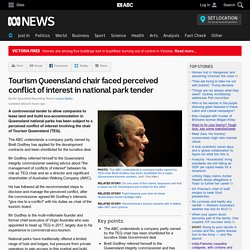 Key points: The ABC understands a company partly owned by the TEQ chair has been shortlisted for a lucrative State Government dealBrett Godfrey referred himself to the Queensland integrity commissioner and has followed all recommended steps to disclose and manage the perceived conflictMr Godfrey's business model is to provide luxury eco-accommodation in national parks, comparing it to a "business-class" experience The ABC understands a company partly owned by Brett Godfrey has applied for the development contracts and been shortlisted for the lucrative deal. Livestock owners, producers urged to stay cool in bid to avoid clashes with animal activists - ABC Rural - ABC News.

The leaders of Western Australia's livestock owners and producers have called on their members to show restraint after tensions between animal activists and farmers reached new levels this week, seeing two protestors charged with trespass. 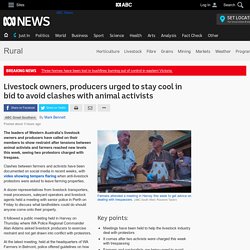 Farmers advice key points Key points: Meetings have been held to help the livestock industry deal with protestorsIt comes after two activists were charged this week with trespassingFarmers and pastoralists are being urged to avoid confrontation Clashes between farmers and activists have been documented on social media in recent weeks, with video showing tempers flaring when anti-livestock protestors were asked to leave farming properties.

A dozen representatives from livestock transporters, meat processors, saleyard operators and livestock agents held a meeting with senior police in Perth on Friday to discuss what landholders could do should anyone come onto their property. Who's watching the water? Experts sound warning on deteriorating groundwater monitoring. Posted about 4 hours agoFri 1 Mar 2019, 7:30pm After almost a year on the toughest of water restrictions, the town of Coonabarabran, a New South Wales rural service hub, has narrowly avoided running out of water. 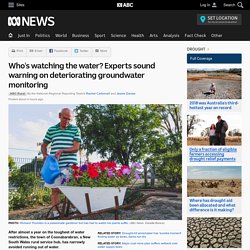 But its salvation did not come from the sky, it came from underground. 'Coona' is now relying on six newly installed bore-water holes. Coonabarabran local Richard Thornton said that the water did not taste great, but it was better than nothing. Contaminating recyclables sees perfectly good recycling materials end up in landfill. Posted about 4 hours agoFri 1 Mar 2019, 7:45pm In a Senate Environment Committee report handed down last June, one of Australia's largest recycling companies, Visy, lamented a household habit that it said "may doom tonnes of other recyclable items to waste". 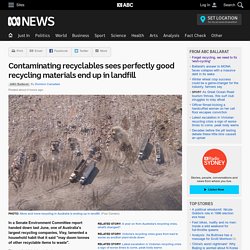 They called it 'wish-cycling'. "Wish-cycling is the phenomenon of tossing anything and everything that could possibly, maybe, sort of be recycled into the recycling bin," Visy's submission read. This inconsistent separation of household recycling from rubbish contaminates otherwise reusable materials, increasing costs and the amount of recyclable waste being dumped. According to the Australian Packaging Covenant Organisation (APCO), of the 4.4 million tonnes of packaging waste produced in 2017–18, 44 per cent ended up in landfill. Balloons found to be deadliest marine plastic for seabirds - Science News - ABC News. We associate balloons with parties, fun and colour. 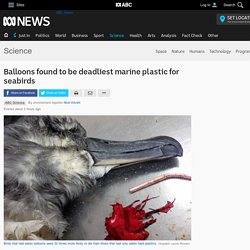 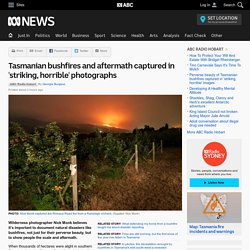 When thousands of hectares were alight in southern Tasmania from the Riveaux Road fire, which is still burning at Advice level, Mr Monk headed out with a camera. He didn't enter the fireground or areas where roads were closed, rather he strategically placed himself where he could capture the fires from afar. "I had a good think about how I could capture it while keeping my distance. " His photos of the Huon Valley fire and the aftermath of the Central Plateau blaze have been widely shared and will no doubt form part of the state's bushfire history. Carpet python devours currawong on roof in viral video. Posted earlier today at 3:23amThu 21 Feb 2019, 3:23am A carpet python has been caught on camera trying to eat a bird up a television antenna in northern New South Wales. Cathy Gall filmed the fascinating scene on the roof of her Kingscliff home on Wednesday morning. Victoria's recycling crisis goes from bad to worse as another plant shuts down. Updated earlier today at 5:28amThu 21 Feb 2019, 5:28am Another Victorian recycling plant has shut its doors to recyclable waste, putting increased pressure on the state's struggling system and forcing more councils to turn to landfill.

Key points: Close to 30 Victorian councils are scrambling to find somewhere to put recyclable wasteMunicipal leaders call on the Victorian Government to acknowledge there is a crisisThe State Government says local councils should have their own contingency plans The South Geelong plant is the third of SKM Recycling's facilities to close, after the Environment Protection Authority (EPA) shut the company's plants at Laverton and Coolaroo amid fears about the fire risk posed by growing stockpiles.

The Coolaroo plant in Melbourne's north was the site of a major blaze in 2017 which burned for 11 days, leading to the evacuation of more than 100 homes. Councils scrambling for a solution. Why does Melbourne's Westgate Park salt lake turn pink? Updated yesterday at 10:10amThu 21 Feb 2019, 10:10am It's almost like it was deliberately engineered for Instagram photos, but Melbourne's pink lake is all natural and has turned rosy again. Nestled in an industrial part of Melbourne, commuters passing it on the West Gate Bridge might be forgiven for thinking it was the result of a toxic spill.

But they would be wrong. The bright pink colour in the salt lake is caused by a natural phenomenon. So how does it get that way? One of the main reasons for the change is salt, and lots of it. Although the lake already has lots of salt — it is a salt lake after all — it only turns pink when salt levels are higher than usual. Victorian timber workers face uncertainty as plan for industry's access to native forests delayed. Posted about an hour agoThu 21 Feb 2019, 8:29pm Timber workers and businesses are sweating on their future, with the Victorian Government delaying the release of plans for industry to access native timber reserves for logging. Key points: Forestry workers say delays to the release of a plan for native timber logging is causing jobs uncertaintyThe long-term future of native timber logging is an issue being debated within the GovernmentThe Premier said the industry faces challenges and "broader considerations" beyond the plan The timber release plan is a key strategy that dictates where native timber can be logged by the state-owned VicForests.

VicForests told the ABC it had been directed not to proceed with a new timber release plan "until further policy work has been completed". Under questioning in state parliament about the delayed release of the plan, Premier Daniel Andrews said he would seek an update on its progress from officials. Queensland Government defends $3.5 million donation to Great Barrier Reef Foundation. Posted about an hour agoThu 21 Feb 2019, 8:34pm The Queensland Government has defended giving almost $3.5 million in taxpayer dollars to the controversial Great Barrier Reef Foundation (GBRF), including more than $100,000 for a smartphone game that is yet to be delivered. Key points: The Queensland Environment Minister has slammed federal funding for the GBRF as lacking transparencyBut Leeane Enoch's department also gave GBRF more than $3.4 millionA $3.3 million state grant for a smartphone game is running behind schedule Earlier this month, a Labor-dominated Senate inquiry found the Federal Government's granting of $444 million to the GBRF over six years was a "highly irresponsible decision" and called on any unspent money to be returned to the Commonwealth.

A GBRF spokeswoman said the first grant helped pay for a 'Love the Reef' smartphone game aimed at school children. While the game was initially slated for release in "early 2019", the spokeswoman confirmed it was still in development. Great Barrier Reef remediation project begins nine years after Shen Neng 1 grounding. Updated 26 minutes agoThu 21 Feb 2019, 9:09pm Nine years after the Chinese-owned coal carrier Shen Neng 1 ran aground on the Douglas Shoal, efforts to restore the reef are about to begin. The ship grounding was the most significant to have impacted the Great Barrier Reef Marine Park, and according The Great Barrier Reef Marine Park Authority [GBRMPA] it is likely the largest grounding in the world.

Catching dugongs and fending off crocodiles as rangers risk everything for conservation in Gulf of Carpentaria - ABC Rural - ABC News. Single-use plastics could be banned under ACT Government proposal. Posted about an hour agoMon 18 Feb 2019, 8:09pm Coffee cups, plastic cutlery, takeaway containers and cotton buds could all be saved from the scrapheap if the ACT Government puts its foot down on single-use plastics.

Hefty 5.5m python proves tough to bag after removal from woman's Mission Beach house. Updated earlier today at 7:40amSat 16 Feb 2019, 7:40am A snake catcher who caught an enormous python at a family home in Far North Queensland says she has become the victim of online abuse for her trouble. Charlie Bear was called to a home at Mission Beach, south of Cairns, to help capture the 40-kilogram python after resident Lea-Ann Kennedy came across the reptile in her shed.

Humans' taste for meat is pushing the world's largest animals toward extinction - Science News - ABC News. NZ scientists hunting for owner of USB after it was found frozen in seal poo. Scientists in race to save giant kelp off Tasmanian coast. Where Did the Phrase “Tree-Hugger” Come From? Independent Senator questions whether 'driest continent on the planet' should grow, export cotton - ABC Rural - ABC News. Sea Shepherd ship attacked with rocks and petrol bombs while patrolling protected waters in Gulf of California. Rare tiny mouse in the spotlight as Aboriginal Top End rangers fight to save vulnerable species. Murray-Darling Basin damage done, we must now restore trust in its management. Farmers frustrated by 'lack of emergency funding' seven weeks on from record flood.