Bitcoin climbs to $US50,000 as 'crypto bubble' surges to 'insane' levels. For years, Adam Malolepszy had resisted the urge to bet on cryptocurrency, telling his friends it was a "bubble waiting to burst". 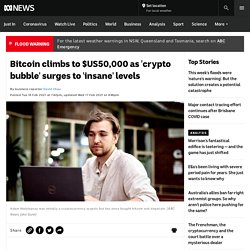 Key points: Bitcoin climbed above $US50,000 on February 16It surged to record highs after endorsements by Tesla, Paypal, Square, Mastercard and BNY MellonTesla CEO Elon Musk warned that cryptocurrencies should be treated as "speculation" Then in mid-December, the infamously volatile bitcoin surged to a (then) record high of $US20,000. Bitcoin kept hitting fresh records almost every week afterwards. How COVID has shone a light on the way we measure economies.

Vaccines are being rolled out; in some places, people are eating in restaurants again; even some cinemas are opening up. 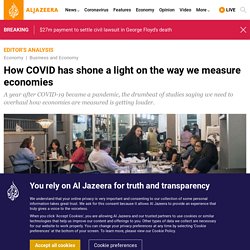 A year after the World Health Organization declared COVID-19 to be a pandemic, the world is slowly returning to a semblance of what it was before the coronavirus began its devastating march. And with trillions of dollars of stimulus measures acting like a financial shot in the arm of the global economy, stock markets have surged as forecasters such as the Organisation for Economic Co-operation and Development ramp up their projections for economic growth. But some economists fear that the underlying causes of the pandemic – among them our pursuit of never-ending economic growth at the expense of the world’s limited natural resources – have yet to be addressed. Global green recovery plans fail to match 2008 stimulus, report shows. Efforts by governments around the world to forge a green recovery from the coronavirus pandemic are so far failing even to reach the levels of green spending seen in the stimulus that followed the 2008 financial crisis, new analysis has shown. 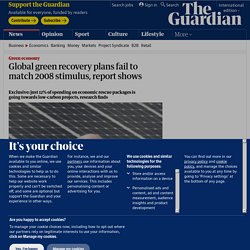 Only about 12% of the spending on economic rescue packages around the world is going towards low-carbon projects, such as renewable energy and clean technology, according to a report by Vivid Economics, published on Friday. That compares with about 16% of stimulus spending that was devoted to green and low-carbon ends after the financial crisis of 2008, according to a previous landmark study by the economist Edward Barbier. Coronavirus crisis sparks large bank withdrawals, despite looming cash transaction ban - ABC News. Why stocks and housing are booming through the coronavirus recession while wages and savings stagnate - ABC News.

Donald Trump has been right all along. 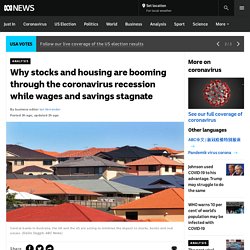 The system really has been rigged. For as the US electoral pantomime played out last week, beamed into a billion lounge rooms across the globe, the real power play moved on in earnest behind closed doors. Fears more trade bans to come as China halts imports of Australian timber, lobsters, barley - ABC News. Australian food, wine and resources exporters fear they may soon be hit by a wave of further Chinese sanctions after Beijing banned Queensland timber imports and suspended trade with another Australian grain exporter. 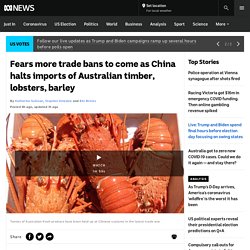 Timber, grain and lobsters are the latest Australian imports to be targeted by ChinaThe Government says it will "work with Chinese authorities" to resolve the problemImporters say they have been told of temporary bans on a range of new products The latest trade strike comes as the Federal Government scrambles to save $2 million worth of live rock lobsters stranded on the tarmac in Shanghai. The Reserve Bank may cut interest rates to very close to zero — so what does that mean for borrowers and savers? - ABC News. The Reserve Bank meets on Tuesday to decide whether or not to lower its cash rate target to 0.1 of a percentage point (from 0.25 percentage points). 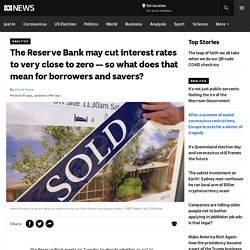 That takes us very close to a negative interest rate. But already some interest rates in Australia are negative — if you take account of inflation. Annual inflation, as measured by the CPI, is currently 0.7 percentage points. And as it stands, the effective overnight cash rate — that's the interest rate the Reserve Bank attempts to influence every month and reflects the rate that banks lend to and borrow from each — is sitting at roughly 0.13 percentage points. So the "value" of the money banks are lending out after adjusting for inflation is falling at roughly 0.7 per cent per annum (on the current rate of inflation), while the "rate of return" the banks receive from that money is well below that at roughly 0.13 per cent. 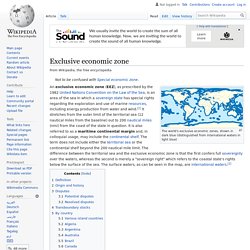 The markets now predict that Donald Trump will lose the US election. Here's how we know - ABC News. US President Donald Trump was raring to get back to work, just days after contracting coronavirus. 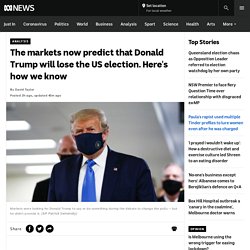 After devastating Beirut explosion, trauma sinks in. Beirut, Lebanon - Walking through the rubble of her neighbourhood last week, Sabine Salameh spotted a car crushed under the yellow sandstone blocks of an old heritage building. 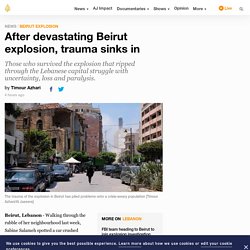 You've likely heard some of the following terms if you've paid attention to the world of finance: Cryptocurrency, Blockchain, Bitcoin, Bitcoin Cash, and Ethereum. But what do they mean? And why is cryptocurrency suddenly so hot? First, we'll explain the blockchain basics. As society become increasingly digital, financial services providers are looking to offer customers the same services to which they're accustomed, but in a more efficient, secure, and cost effective way. First-time share market investors take a punt on coronavirus recovery - ABC News. Coronavirus share market slump leads to anxious time for self-funded retirees - ABC News.

Big business. Big business involves large-scale corporate-controlled financial or business activities. As a term, it describes activities that run from "huge transactions" to the more general "doing big things". The concept first rose in a symbolic sense after 1880 in connection with the combination movement that began in American business at that time. [citation needed] United States corporations that fall into the category of "big business" as of 2015[update] include ExxonMobil, Walmart, Google, Microsoft, Apple, General Electric, General Motors, Citigroup, Goldman Sachs, and JPMorgan Chase.

History[edit] Early 20th century[edit] The automotive industry began modestly in the late-19th century, but grew rapidly following the development of large-scale gasoline production in the early 20th century. Big Oil. Chart of the major energy companies dubbed "Big Oil" sorted by 2005 revenue Big Oil is a name used to describe the world's six or seven largest publicly traded oil and gas companies, also known as supermajors.[1][2][3][4] The term emphasizes their economic power and influence on politics, particularly in the United States. Big oil is often associated with the fossil fuels lobby and also used to refer to the industry as a whole in a pejorative or derogatory manner.[5] The supermajors are considered to be BP, Chevron Corporation, ExxonMobil, Royal Dutch Shell, Total and Eni, with ConocoPhillips also sometimes described in the past as forming part of the group.[1][2] History[edit]

Media conglomerate. Company owning multiple mass media companies. Pharmaceutical industry. The pharmaceutical industry discovers, develops, produces, and markets drugs or pharmaceutical drugs for use as medications to be administered (or self-administered) to patients, with the aim to cure them, vaccinate them, or alleviate the symptoms.[1][2] Pharmaceutical companies may deal in generic or brand medications and medical devices. They are subject to a variety of laws and regulations that govern the patenting, testing, safety, efficacy and marketing of drugs. History[edit] Big Pharma conspiracy theory. Big Pharma conspiracy theories are conspiracy theories which claim that the medical establishment in general and pharmaceutical companies in particular, especially the large ones, operate for sinister purposes and against the public good.[1][2] History and definition[edit] Big Tobacco.

Big Chocolate. "Big Chocolate" is a business term assigned to multi-national chocolate food producers, akin to the terms assigned to "Big Oil" and "Big Tobacco". Big Soda. Need to find a good restaurant? Economics serves up some golden rules. Where to eat? Best Cryptocurrencies To Buy. Revealed: The households with surging wealth and the households standing still. Dealing with Unexpected Expenses.