Get Active: TV-campaign to get out of your chair. Tayla Harris: 'I would be happy to go through it all again but I'd rather not' Until last March, Harris was admired by many yet not widely recognized. 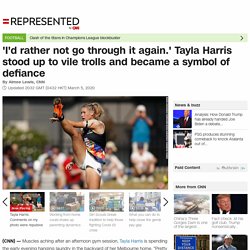 As a young player in the women's Australian Football League (AFLW), a summer sport that is an Australian obsession, her focus had been on flourishing professionally in two sports -- on making a name for herself on the football field and, during the off season, in the boxing ring, too. But a picture posted on Facebook last year of Harris playing for her team Carlton Blues elevated the then 21-year-old beyond the world of sport. She became one of the most talked-about sportswomen on the planet. First came the vile messages, and they came thick and fast -- sexist, disturbing and damaging comments posted below a now iconic picture of Harris doing her job. With one tweet Harris had made a lasting impression in the usually transitory world of social media, while the photograph is now a symbol of defiance. "If my example is going to help someone in any way, I would be happy to go through it all again.

Tayla Harris AFLW photo could become landmark moment in Australian sport - ABC News. Posted about an hour agoWed 20 Mar 2019, 8:16pm The now-famous photo of AFLW player Tayla Harris could become a landmark moment in Australian sport, according to the photographer who snapped the image. Key points: The photographer hopes the reaction to the image marks a "line in the sand"Parallels have been drawn with the famous image of Nicky Winmar defying racist tauntsModerators of social media pages are being urged to take strong action against trolls "I think we'll look back on this moment and hopefully it's a line-in-the-sand moment where we take a stand against these online bullies," photographer Michael Willson said.

"Women especially shouldn't have to put up with derogatory comments and negative feedback just because you've got these keyboard warriors out there who think they can hide behind their screens. " The effects of the media on sport - Commercialisation in sport - AQA - GCSE Physical Education Revision - AQA - BBC Bitesize. Alcohol brands should stop sponsoring sport - researchers. Health researchers say people watching televised sport, including children, are exposed to large amounts of alcohol advertising. 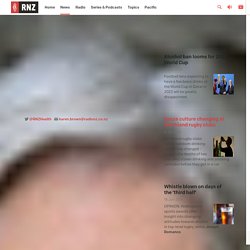 The Steinlager beer brand has had a long association with the All Blacks, but health researchers say alcohol companies should not be sponsoring sport. Photo: 123rf.com In the latest issue of the New Zealand Medical Journal for a ban on alcohol sponsorship in sport, the researchers from Otago and Harvard Universities have called for a ban on alcohol sponsorship in sport. The researchers studied New Zealand television broadcasts of five international sporting events over summer two years ago. The research analysed five major sporting events televised at that time: a Rugby League 9s test match (women) in Auckland; the Australia Open Final tennis match (men) in Melbourne; the Asian Cup Final (men), Sydney; Football Ferns International Friendly (women), Chicago; and the one-day Cricket World Cup Final (men), Melbourne.

Gender in Televised Sports > Center for Feminist Research > USC Dana and David Dornsife College of Letters, Arts and Sciences. BBC must take action over sexist sports coverage, says Maria Miller. Culture secretary Maria Miller has attacked the BBC over its sexist Wimbledon coverage, and said that she is to boycott the Open golf championship because it is being held at the Muirfield club, which refuses to admit women members.

Miller has written a scathing letter to Tony Hall, the director general of the BBC, demanding to know "any further action is likely to be taken" over Wimbledon commentator John Inverdale's sexist comments. Inverdale provoked outrage when he said that women's champion Marion Bartoli was "never going to be a looker, you'll never be a Sharapova so you have to be scrappy and fight? ", prompting more than 700 complaints to the BBC. Miller, who is also minister for women and equalities, said that she is particularly concerned about the BBC incident as she has identified increased coverage of women's sport as a top priority. Screen Time Topic Center. Media - definition of media in English. Noun 1the mediatreated as singular or plural The main means of mass communication (broadcasting, publishing, and the Internet) regarded collectively. 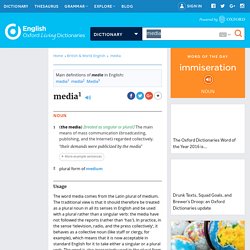 ‘their demands were publicized by the media’ ‘Perhaps the media attention will ensure that things turn out for the best.’ ‘Despite that decent return, he has never won over the media or his coach.’ ‘The media barrage brought public attention, and led more people to become fans.’ ‘Much of the news and information in the media originates from public relations sources.’

Usage The word media comes from the Latin plural of medium. Pronunciation Anatomy An intermediate layer in the wall of a blood vessel or lymphatic vessel. Origin Late 19th century: shortening of modern Latin tunica (or membrana) media ‘middle sheath (or layer)’. proper noun An ancient region of Asia to the south-west of the Caspian Sea, corresponding approximately to present-day Azerbaijan, NW Iran, and NE Iraq. Tvsports. Impact of media use on children and youth. GCSE Bitesize: Sport and the media.