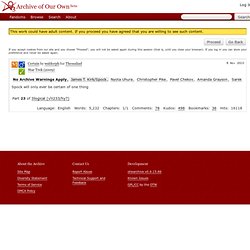 Please consider turning it on! </p> Archive of Our Own beta Log In Site Navigation This work could have adult content. If you accept cookies from our site and you choose "Proceed", you will not be asked again during this session (that is, until you close your browser). Footer Close. Sweetheart Come to Me - rabidchild67 - Star Trek: Alternate Original Series (Movies. “I think you’re wrong – I think Penllyn is the better candidate,” Jim said around a mouthful of hot fudge sundae with chocolate ice cream. 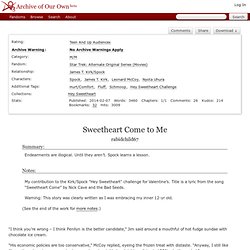 “His economic policies are too conservative,” McCoy replied, eyeing the frozen treat with distaste. “Anyway, I still like Abernathy – her stance on reviewing member planets’ beings’ rights policies is 100% what’s needed.” Spock laid his lunch tray onto the table across from McCoy and took a seat beside Jim. “If you are debating the relative merits of the Federation presidential candidates’ race, it will be a waste of time, gentlemen. The results are already in. “Dang it!” “Bones, did you just punch the air in a classic ‘aw shucks’ maneuver?” “I did no such thing.” “No, you totally did – what are you, in some old timey ‘Three Stooges’ short or something?” “Some what?” “Don’t tell me you’ve never heard of the Stooges, Bones – it’s classic 20th Century comedy, right up your alley.” “Because it’s hilarious, slapsticky humor? Red Shift - jane_potter - Star Trek (2009) Walk with me - ObsidianEmbrace - Star Trek: Alternate Original Series (Movies)

Good Morning - Irelando - Star Trek: Alternate Original Series (Movies) There was a perfectly good reason that decorated Starfleet Captain James Tiberius Kirk was leaning against the wall of the shuttle bay hundreds of feet away from the shuttle that would take him back to his ship. 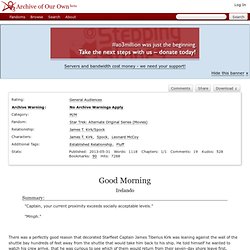 He told himself he wanted to watch his crew arrive, that he was curious to see which of them would return from their seven-day shore leave first. The fact that this was a blatant lie didn’t bother Jim in the least. He just had to buy it enough to convince— “Tell me you aren’t hungover.” Speak of the devil. “Morning, Bones.” “Damnit, Jim, of all the irresponsible—“ “I’m not hungover,” Jim protested, “I’m just—“ He yawned widely, a wave of dizziness rushing through him.

Bones didn’t look the least bit mollified. Jim waved a hand. The unmistakable sound of a hypospray priming had Jim lurching away even before he opened his eyes to confirm it. “A little chemical wake-up call,” Bones answered in his usual growl, reaching for Jim’s arm. Bones came after him, relentless. How We Are (but not how we're going to be) - alpha_hydra - Star Trek (2009) Chess, and other Aphrodisiacs - Chapter 1 - ObsidianEmbrace - Star Trek: Alternate Original Series (Movies) Signed, Sealed, Delivered (I'm Yours) - kianspo - Star Trek (2009) James T. 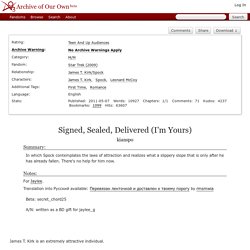 Kirk is an extremely attractive individual. Spock has always been cognizant of this fact, just as he is aware of other aspects of the surrounding physical universe. The stars are blazing balls of boiling gas; the sky is blue (green, orange, yellow) due to some particular pattern of the aerial dispersion in the atmosphere; E equals mc2; and a human being called James T. Kirk is in possession of a peculiar set of features that makes him attractive to potential sexual partners. This fact is stored, along with numerous others, somewhere in the highly ordered labyrinth of Spock’s brain, and, by itself, it has no special significance.

Yet it is this very notion that is unexpectedly brought under the spotlight, and Spock is forced to contemplate it further. Spock hesitates to characterize his relationship with Kirk outside the professional field. For example, humans call someone who merely isn’t their enemy a ‘friend.’ Spock is helplessly lost. Yes, the supposition does have merit.