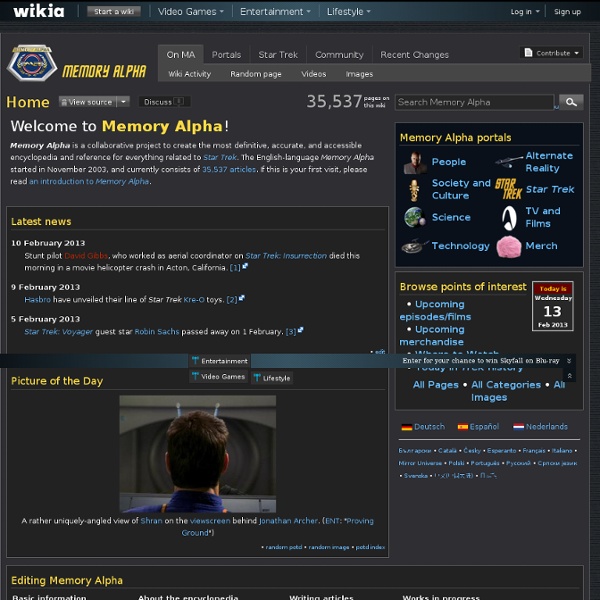 Memory Alpha is not endorsed, sponsored, or affiliated with CBS Studios Inc. or the "Star Trek" franchise.The Star Trek trademarks, logos, and related names are owned by CBS Studios Inc., and are used under "fair use" guidelines.The user-created content of this site is released under the Creative Commmons "Attribution-NonCommercial" license version 2.5, which can be found here. See Memory Alpha: Copyrights for more information.

Alien Species Wiki - Aliens, UFOs, Space aliens Welcome to the Alien Species Wiki 5,546 articles since we began Alien Species Wiki is a website containing information on any alien creature ever imagined by mankind, from Star Trek's Tribbles to Wayne Barlowe's Emperor Sea Striders. The wiki format allows anyone to freely add or edit content! Majel Barrett Majel Barrett-Roddenberry (first name pronounced /ˈmeɪdʒəl/; born Majel Leigh Hudec;[1] February 23, 1932 – December 18, 2008) was an American actress and producer. She is best known for her role as Nurse Christine Chapel in the original Star Trek series, Lwaxana Troi on Star Trek: The Next Generation and Star Trek: Deep Space Nine, and for being the voice of most onboard computer interfaces throughout the series. She was also the wife of Star Trek creator Gene Roddenberry. As the wife of Roddenberry and given her ongoing relationship with Star Trek—participating in some way in every series during her lifetime—she was sometimes referred to as "the First Lady of Star Trek". She and Gene Roddenberry were married in Japan on August 6, 1969, after the cancellation of the original Star Trek series. They had one son together, Eugene "Rod" Roddenberry, Jr., born in 1974.

The Greatest Star Trek Quotes <--Back to the greatest movie, TV, and song lines It can be argued that a human is ultimately the sum of his experiences. -Benjamin Sisko, Star Trek: Deep Space Nine, “Emissary” In this galaxy there’s a mathematical probability of three million Earth-type planets. And in the universe, three million million galaxies like this.

Star Trek: The Original Series The show is set in the Milky Way galaxy, roughly during the 2260s. The ship and crew are led by Captain James T. Kirk (William Shatner), first officer and science officer Mr. Star Trek Star Trek has been a cult phenomenon for decades.[1] Fans of the franchise are called Trekkies or Trekkers. The franchise spans a wide range of spin-offs including games, figurines, novels, toys, and comics. Star Trek had a themed attraction in Las Vegas which opened in 1998 and closed in September 2008. At least two museum exhibits of props travel the world. The series has its own full-fledged constructed language, Klingon. Several parodies have been made of Star Trek.

Cool Stuff: Star Trek Home Theater Someone thought it would be a good idea to model their home theater after the Enterprise NCC-1701D from Star Trek: The Next Generation. The result is super geeky, but actually rather cool. Named the best theme theater installation at CEDIA 2007, this Palm Beach County, FL home features motion-activated air-lock doors with series sound effects, and a “Red Alert” button on the Crestron TPMC-10 controller to turn all of the LEDs bright red and flashing. Classic TV Shows - Star Trek with William Shatner and Leonard Nimoy Star Trek TOS Tidbits "Space: The Final Frontier. These are the voyages of the starship Enterprise. Its five year mission: To explore strange new worlds... Cheap Characters - The MUGEN Database, the M.U.G.E.N content encyclopedia This category contains characters that are considered cheap. It's not recommended for many people the usage of them. A cheap character fulfills any of the following conditions: The character has unmanageable attacks. The character has ridiculously powerful unmanageable supers, some of which kill in a single hit. The character gains power at a ridiculously fast rate (lethal when combined with unmanageable hypers).

The Evolution of 'Star Trek'(Infographic) On Sept. 8, 1966, an American science fiction icon was born. The “Star Trek” television show lasted only three seasons, but spawned a lasting legacy that has stretched across decades and led to four spinoff live-action shows, a cartoon series and a dozen feature films. Gene Roddenberry and his team set their show aboard the U.S.S. Enterprise, a sophisticated starship with a competent crew of professional astronauts. A pilot episode starring Jeffrey Hunter was rejected by the NBC TV network as “too cerebral” for a general audience. The show was retooled with William Shatner in the starring role of Captain James T.

Star Trek: The Original Series Star Trek debuted in 1966, billed by its creator Gene Roddenberry as "a Wagon Train to the stars". Considered ground-breaking for its era, Star Trek showed a multinational, multiracial cast crewing the U.S.S. Enterprise, a starship devoted to exploration. The series was saved from cancellation by fan effort after its second season, but was then cancelled after the third season. Despite this, Star Trek survived, first in the form of an animated series, later as a series of major motion pictures. A second television series, Star Trek: The Next Generation, debuted in 1987.