FanFiction. Looking for Shooting Stars. Summary: Spock and his family have moved to Earth. 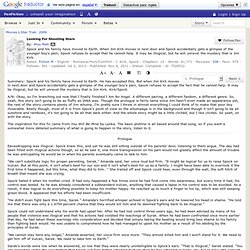 He has accepted this. But when Jim Kirk moves in next door and Spock accidentally gets a glimpse of the younger boy's pain, Spock refuses to accept the fact that he cannot help. It may be illogical, but he will unravel the mystery that is Jim Kirk. Kirk/Spock A/N: Okay, so I'm branching out now that I finally finished I Am No Angel. The inspiration for this fic came from You Will Be Mine by Lenka. Prologue Eavesdropping was illogical. "We can't substitute logic for proper parenting, Sarek," Amanda said, her voice loud but firm. Spock hated it when his mother cried.

"He didn't even fight back this time, Sarek. " Spock could not understand why his words had upset her. "We cannot stay here any longer," Amanda asserted, her voice firm once more. Sarek's words were low when he answered, so low that they were nearly unintelligible to Spock's ears. The Connection Within. A/N: Please note that I will update every few days, please be patient! 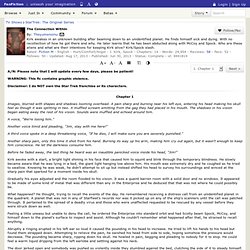 WARNING: This fic contains graphic violence. Disclaimer: I do NOT own the Star Trek franchise or its characters. Chapter 1 Images, blurred with shapes and shadows looming overhead. A pain sharp and burning near his left eye, entering his head making his skull feel as though it was splitting in two. AO3. Liverjournal. Deus ex Spockina - Fic Masterlist. A compilation of my fic for reference (everything's also tagged). 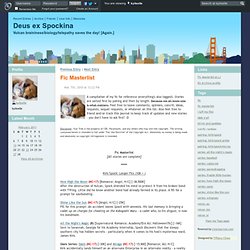 Stories are sorted first by pairing and then by length. Because we all know size is what matters. Feel free to leave comments, opinions, concrit, ideas, requests, sequel requests, or whatever on this list. Also feel free to friend and/or track this journal to keep track of updates and new stories - you don't have to ask first! :D Disclaimer: Star Trek is the property of CBS, Paramount, and any others who may own the copyright. Fic Masterlist[All stories are complete] Kirk/Spock: Longer Fics (10K + ) How High the Moon(NC-17) [Romance; Angst; H/C] [~38,500K]After the destruction of Vulcan, Spock shielded his mind to protect it from his broken bond with T'Pring.

Shine Like the Sun (NC-17) [Angst; H/C] [~25K]Fill for this prompt: An accident leaves Spock with amnesia. No, not hung. Not at all. Hanged, yes. Untouched. AN: So I realized today that tomorrow is the one-year anniversary of when I completed HHtM over at st_xi_kink. 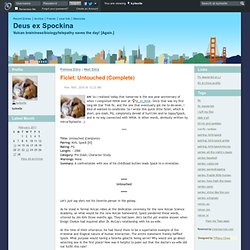 Since that was my first long-ish Star Trek fic, and the one that eventually got me to de-anon, I kind of wanted to celebrate. So I wrote this quick little ficlet, which is short, pre-slash, PG, completely devoid of hurt! Jim and/or toppy! Spock, and in no way connected with HHtM. Title: Untouched (Complete) Pairing: Kirk, Spock [XI] Rating: PG Length: ~ 2500 Category: Pre-Slash; Character Study Warnings: None Summary: A confrontation with one of his childhood bullies leads Spock to a revelation. Untouched Let's just say she's not his favorite person in the galaxy. As he stood in formal Vulcan robes at the dedication ceremony for the new Vulcan Science Academy, on what would be the new Vulcan homeworld, Spock pondered these words, uttered by Jim Kirk three months ago. He had expressed his opinion on the dubious merits of the statement to Jim. Shine Like the Sun. Property of the Victor. Present. Title: PresentPairing: Kirk and De-aged! 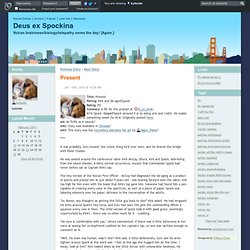 SpockRating: PGSummary: A fill for this prompt at st_xi_kink: Kirk/Spock.Deaged! Spock (around 5 or 6) doing arts and crafts. He makes something sweet for Kirk. Originally posted here. Fagur_fiskur! It was probably, Sulu mused, the cutest thing he'd ever seen, and he shared the bridge with Pavel Chekov. He was seated around the conference table with McCoy, Uhura, Kirk and Spock, debriefing from the latest mission. The tiny version of the Vulcan First Officer - McCoy had diagnosed the de-aging as a product of spores and placed him at just about 5 years old - was leaning forward over the table, still too high for him even with the boost that Kirk's lap gave him. "So, Bones, any thoughts on getting this little guy back to size?

" "He sure is comfortable with you," Uhura commented. "Well, his mom was human, wasn't she? " Uhura did not look convinced. McCoy cleared his throat. "Really? " "He can probably sense your emotions. "Yes, of course. " "Affirmative. " The Kirk/Spock Slash Community. Damn it Jim, I'm a fanfic reader, not a human.