(168) Guan Wei artist interview. (140) Magazine Resist Technique for the Gelli® Printing Plate. Political Art. Banksy obliterated! Should we preserve street art? - The Arts (9,10) This 1955 'Good House Wife's Guide' Explains How Wives Should Treat Their Husbands. Angel is a writer on the Original Content team at LittleThings. 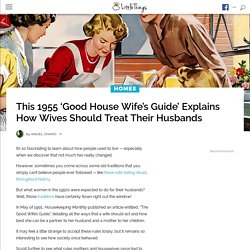 Check out her articles about crucial tips on female and doggie health. She loves to take long walks, volunteer with kids, try new food, browse through burger recipes, and code in her spare time. Feel free to let her know what you'd like to see her write up next. It’s so fascinating to learn about how people used to live — especially when we discover that not much has really changed. However, sometimes you come across some old traditions that you simply can’t believe people ever followed — like these odd dating rituals throughout history. Barbara Kruger - Feminist Artist. Her Style Barbara Kruger's graphic work usually consists of black-and-white photographs with overlaid captions set in white-on-red Futura Bold Oblique. 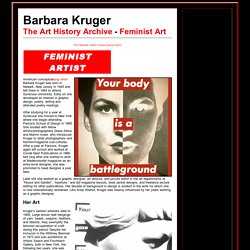 The phrases usually make a bold statement and commonly use pronouns such as you, I, your, we and they. She juxtaposes imagery with text containing criticism of sexism/misogyny and cultural power structures. Much of her text questions the viewer about feminism, classicism, consumerism, and individual autonomy and desire, although her black-and-white images are culled from the mainstream magazines that sell the very ideas she is disputing. The Australian. You have cookies turned off To use this website, cookies must be enabled in your browser.

To enable cookies, follow the instructions for your browser below. Facebook App: Open links in External Browser There is a specific issue with the Facebook in-app browser intermittently making requests to websites without cookies that had previously been set. George Gittoes: I Witness - Hazelhurst - Sutherland Shire Council. George Gittoes - Stage 5: Visual arts theory. Dove evolution. Youtube.

The German Painter Who Fought In The Trenches - Otto Dix I WHO DID WHAT IN WW 1. Guernica: What inspired Pablo Picasso's masterpiece? BBC News. Adam Cullen. George Grosz, Metropolis. Reg Mombassa. Christmas deivery - Time is running out. 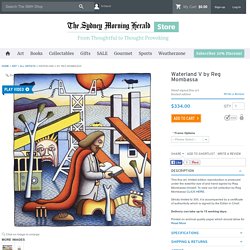 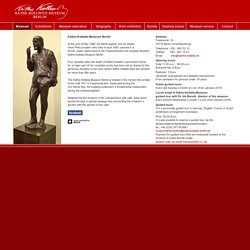 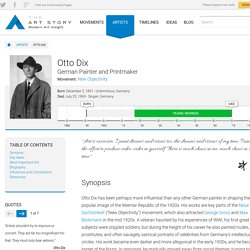 I paint dreams and visions too; the dreams and visions of my time. Painting is the effort to produce order; order in yourself. There is much chaos in me, much chaos in our time. " Synopsis Otto Dix has been perhaps more influential than any other German painter in shaping the popular image of the Weimar Republic of the 1920s. Key Ideas Otto Dix is one of modern painting's most savage satirists. Otto Dix was initially drawn to Expressionism and Dada, but like many of his generation in Germany in the 1920s, he was inspired by trends in Italy and France to embrace a cold, linear style of drawing and more realistic imagery. Guerrilla Girls. David Alfaro Siqueiros. David Alfaro Siqueiros (born José de Jesús Alfaro Siqueiros, December 29, 1896, in Chihuahua - January 6, 1974, in Cuernavaca, Morelos) was a Mexican social realist painter, better known for his large murals in fresco. 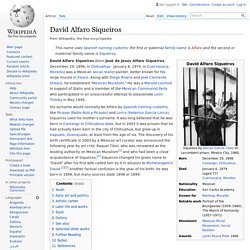 Metropolis - George Grosz. The transformation of the city into a vast metropolis was one of the subjects that most fascinated early twentieth-century painters, and Grosz was no exception. 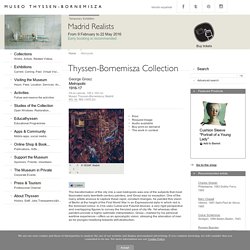 One of the many artists anxious to capture these rapid, constant changes, he painted this vision of Berlin at the height of the First World War in an Expressionist style in which red is the dominant colour. In it he uses Cubist and Futurist devices, a very rigid perspective and overlapping figures to convey the frenzied pace of city life. Yet whereas other painters provide a highly optimistic interpretation, Grosz—marked by his personal wartime experience—offers us an apocalyptic vision, stressing the alienation of man as he plunges headlong towards self-destruction. Metropolis is a significant work on account of its underlying history. Banksy. Honoré Daumier. Honoré-Victorin Daumier (French: [ɔnɔʁe domje]; February 26, 1808 – February 10, 1879) was a French printmaker, caricaturist, painter, and sculptor, whose many works offer commentary on social and political life in France in the 19th century. 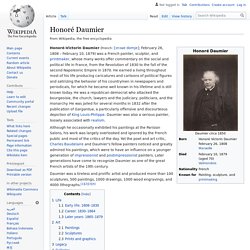 Daumier produced over 500 paintings, 4000 lithographs, 1000 wood engravings, 1000 drawings and 100 sculptures. A prolific draughtsman, he was perhaps best known for his caricatures of political figures and satires on the behavior of his countrymen, although posthumously the value of his painting has also been recognized.[1] Life[edit] Daumier was born in Marseille to Jean-Baptiste Louis Daumier and Cécile Catherine Philippe. 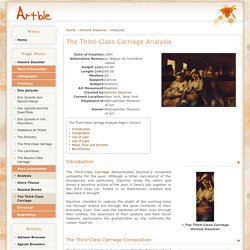 Gaza family 'tricked' into selling Banksy painting for $175. A man from the Gaza Strip has told the BBC he was tricked into selling a work painted by UK graffiti artist Banksy. 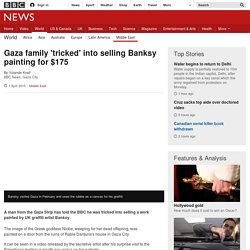 The image of the Greek goddess Niobe, weeping for her dead offspring, was painted on a door from the ruins of Rabie Darduna's house in Gaza City. It can be seen in a video released by the secretive artist after his surprise visit to the Palestinian territory a month ago and is on his website. A local buyer gave Mr Darduna just 700 shekels ($175; £118) for the picture. However, original Banksy artworks have recently sold for hundreds of thousands of dollars. Lent 2, Romans 5:1-11. The Passion of Sacco and Vanzetti (1931) by Ben Shahn copyright 1931 Historical Description: Few of us today could even imagine just how polarizing the Sacco and Vanzetti trials and executions of 1927 were to both the nation and the world. Accused of murder, the Italian immigrants became the figureheads of the debate of human rights, the justice system, immigration and politics. LESSON THREE: Action/Reaction: Art and Politics in Oxford Art Online.

Following the outbreak of World War I, avant-garde artistic practices that had been developed to challenge traditional means of representation (Cubism, for example) lost their resonance with many artists, who felt that their abstract fissures and voids were too removed from current political and social realities. A number of artists, including Pablo Picasso and Fernand Léger, rejected Cubism and sought a more suitable means of representing the world around them. This lesson takes as its focus works of art that were created by artists in direct response to the war and to social turmoil in their environments and in the world.

Students will examine three images that represent different ways that artists, in the years between World War I and World War II, responded to the social and political turmoil around them. Students will discuss these images in terms of subject matter, composition, style, and representation. Annette Messager: motion / emotion. Guernica Appropriations. - Terrigal High School. Thought Bubble: Amy Krouse Rosenthal. Art is a Weapon. Portrait of Noel Counihan, 1976. Photographer: Julie Millowick. Image courtesy of the National Library of Australia. Works by Noel Counihan. Counihan's Cage - Hindsight. The scene is Sydney Road, Brunswick, Victoria. Australianbiography.s3.amazonaws.com/study/4598_ausbiotucker.pdf?_sm_au_=isVpf70f4W5T16ss. Class: The Fabric of Society? And the Fabric of Grayson Perry. The Gamblers - Albert Tucker (1914-1999)