Malaysia Airlines Flight MH370: Where Is It? Updated at 10:25 a.m. ET on June 17, 2019. 1. The Disappearance At 12:42 a.m. on the quiet, moonlit night of March 8, 2014, a Boeing 777-200ER operated by Malaysia Airlines took off from Kuala Lumpur and turned toward Beijing, climbing to its assigned cruising altitude of 35,000 feet. The designator for Malaysia Airlines is MH. To hear more feature stories, get the Audm iPhone app. In the cabin were 10 flight attendants, all of them Malaysian. Eleven minutes later, as the airplane closed in on a waypoint near the start of Vietnamese air-traffic jurisdiction, the controller at Kuala Lumpur Center radioed, “Malaysian three-seven-zero, contact Ho Chi Minh one-two-zero-decimal-nine. Primary radar relies on simple, raw pings off objects in the sky. The Vietnamese controllers, meanwhile, saw MH370 cross into their airspace and then disappear from radar.

At that moment, the airplane should have been landing in Beijing. 2. Gibson, whom I met recently in Kuala Lumpur, is a lawyer by training. 3. How to Steal an Airplane: From 9/11 to MH370. MH370: 20 Killed Worked For Electronic Warfare, Military Firm linked to Bush Family. A glaringly obvious truth has been successfully hidden from most people who have briefly looked into the missing Malaysian flight MH370. 20 of the passengers killed in the disappearance were employed by Freescale Semiconductor, a defense contractor that creates hi-tech microchips for “defense.” 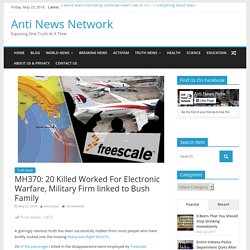 Freescale is headquartered in Austin, Texas. On March 2, new products were released by the company to the American market, and 5 days later flight MH370 took off for Beijing from Kuala Lumpur when it disappeared, along with 20 people working for Freescale Semiconductor. Not only were these 20 employees, but they were 20 “senior staff” who were presumably very important to the work being done at Freescale. Freelance journalist: ‘Hijacked flight 370 passenger sent photo from hidden iPhone tracing back to secret U.S. military base Diego Garcia’ INDIAN OCEAN (INTELLIHUB) — According to freelance journalist Jim Stone, one of the American passengers, Phillip Wood, a technical storage executive at IBM, who was aboard the now missing Malaysian Airlines flight 370, keystered his iPhone 5 inside his anus after the Boeing 777 carrying 239 people was hijacked by military personnel while on route to China. 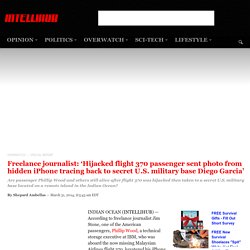 Amazingly Stone claims that metadata within the photo yields evidence confirming “100 percent” that Phillip Wood sent the photo along with a brief voice activated text from GPS coordinates which put Wood only a few miles away from the U.S. controlled Diego Garcia military base which is located on an island south of the Maldives in the Indian Ocean.

In his post Stone claims that the coordinates may be off by a few miles (see update below post), proving that the iPhone actually sent the otherwise blank black picture revealing nothing else. As reported by Stone the picture was posted along with the following text allegedly from Wood: Atlantis FOUND? '8.5-mile pyramid' discovered at bottom of the ocean. The structure, estimated as being between 3.5 and 11 miles across, was spotted on Google Earth in the Pacific Ocean just west of Mexico. 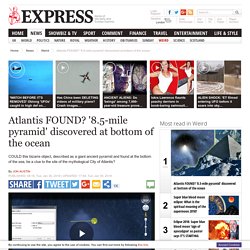 A video about the discovery uploaded to YouTube has drawn vast speculation about what it could be, including an ancient sunken city, a bizarre UFO, or even an alien base. The "discovery" was made by Argentinian Marcelo Igazusta. He says in a video about the find it is an alien UFO left underwater. The video commentary described it has being "an intense light in the Pacific Ocean" of 3.5 miles in length, with a shape similar to a plane. Scott C Waring, an alien conspiracy theorist, said: "It is a perfect pyramid that measures over 8.5 miles across one side of its base.

He suggested it could symbolise an ancient civilisation, or even something alien. ABEL DANGER: MH-370 Hijacked – Landed With 239 Corpses Aboard. 6/26/2017 – Interview with retired pilot and founder of ABEL DANGER , Field McConnell who confirms media reports of “lost” MH-370 is FAKE NEWS. 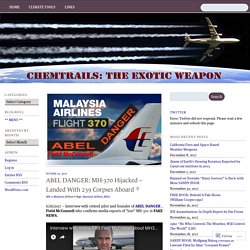 Highlights: The Boeing 777’s 2 Rolls Royce Trent engines were communicating service data with satellites as they normally do as it was being hijacked to Diego Garcia where it landed and rolled into a portable hangar. The airliner’s location was cloaked by a portable hangar designed to block radio/RF transmissions from leaving or entering – much like a “faraday cage”. 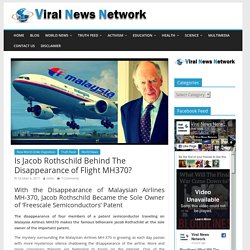 The mystery surrounding the Malaysian Airlines MH-370 is growing as each day passes with more mysterious silence shadowing the disappearance of the airline. More and more conspiracy theories are beginning to boom on the internet. New MH370 analysis again says we looked in the wrong places. Predicted drift patterns of MH370 debris. 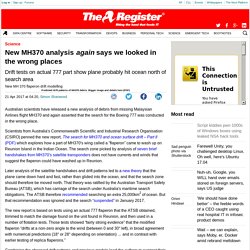 Bigger image and details here (PDF) Malaysian airliner may have been commandeered and taken to secret Coco Island base. (INTELLIHUB) — An astonishing new report via the Wall Street Journal, dovetailing with information received by Intellihub News earlier Wednesday, may shed some light on the whereabouts of the missing plane and its occupants. 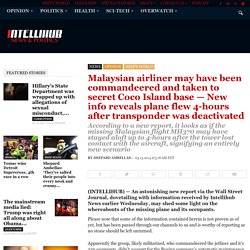 Please note that some of the information contained herein is not proven as of yet, but has been passed through our channels to us and is worthy of reporting as no stone should be left unturned. Apparently the group, likely militarized, who commandeered the jetliner and it’s 239 occupants, didn’t account for the Boeing company’s automatic maintenance download which successfully transferred data from the missing aircraft to Boeing’s database about 5-hours after the triple-seven’s takeoff. This data transfer did happen and has been confirmed by Boeing officials. Partner of MH370 passenger acuses governments of cover up on BBC » Intellihub. MALAYSIA (INTELLIHUB) — Sarah Bajc, a 48-year-old American teacher recently appeared on BBC News to discuss the disappearance of her partner Phillip Wood. 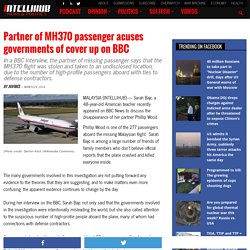 Phillip Wood is one of the 277 passengers aboard the missing Malaysian flight. Sarah Bajc is among a large number of friends of family members who don’t believe official reports that the plane crashed and killed everyone inside. The many governments involved in this investigation are not putting forward any evidence to the theories that they are suggesting, and to make matters even more confusing, the apparent evidence continues to change by the day. Nocookies. 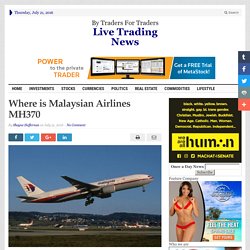 Top searchers at the Dutch company leading the underwater hunt for Malaysia Airlines jet MH370 say they believe the plane may have glided down rather than dived in the final moments, meaning they have been scouring the wrong patch of ocean for two years. Doubts that the search teams are looking in the right place will likely fuel calls for all data to be made publicly available so that academics and rival companies can pursue an “open source” solution – a collaborative public answer to the airline industry’s greatest mystery. The meeting between officials from China, Australia and Malaysia is expected to discuss the future of the search.

The three governments have previously agreed that unless any new credible evidence arises the search would not be extended, despite calls from victims’ families. Metal on Thai Beach Likely to Be Rocket, Not Plane Part. A Japanese rocket maker said Monday that a large piece of metal that washed up on a beach in Thailand is likely part of a rocket launched by Japan, not a missing Malaysian plane. 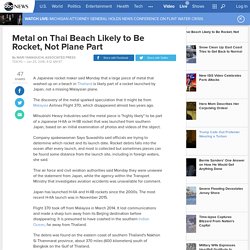 The discovery of the metal sparked speculation that it might be from Malaysia Airlines Flight 370, which disappeared almost two years ago. Mitsubishi Heavy Industries said the metal piece is "highly likely" to be part of a Japanese H-IIA or H-IIB rocket that was launched from southern Japan, based on an initial examination of photos and videos of the object. Company spokeswoman Sayo Suwashita said officials are trying to determine which rocket and its launch date. Rocket debris falls into the ocean after every launch, and most is collected but sometimes pieces can be found some distance from the launch site, including in foreign waters, she said.

Japan has launched H-IIA and H-IIB rockets since the 2000s. Cover-up: New reports claim U.S military "shot down" flight MH370 near "Diego Garcia" - Intellihub. By Shepard Ambellas INDIAN OCEAN (INTELLIHUB.COM) — In an attempt to cover up the fact that Malaysian Airlines flight MH370 indeed landed at the U.S. military base Diego Garcia, located on a remote island in the Indian Ocean, with all passengers, crew, and contents aboard, the mainstream media is now reporting that a former airline CEO and writer, “Marc Dugain”, told sources that massive jetliner was “hacked” and was going to be utilized in a “terror attack”, much like the ones of 2001.

To make matters even more interesting, some elements of the Dugain’s tale match up with information received by Intellihub, and some don’t. Now new circulating mainstream reports maintain that the plane was spotted by “fishermen” on March 8, 2014, flying low, by the remote island of Diego Garcia just before the U.S. military fired upon it. Intellihub already touched on this aspect, all the way back in April, in an article which reads in part: MH370 Diego Garcia - Now We Know! What Else Are They Not Telling Us? December 23, 2014 By Live Free or Die Back on March 18th, 2014 we reported that still-missing Malaysian 370 approached Diego Garcia, having been seen by residents of nearby Maldives Islands, a story confirmed by a US airline boss in this mind shattering new report that claims that the US military took down the plane because they believe that it had been hacked and was going to be used in a 9/11 style attack upon the military base. With alternative media proving once again how far ahead of the mainstream media, we have to ask once again WHAT ELSE our government is hiding from us as Susan Duclos asks in the 1st video below why major governments across the world LIED to the families of victims, and searches went on in various WRONG locations with BILLIONS OF DOLLARS SPENT, when all along, the US government KNEW where this plane was, THEY had shot it down?!?!

MH370 Diego Garcia: Now We Know! What Else Aren't They Telling Us? Now You Know Why It's Called BeforeItsNews - Former airline boss says Malaysia Airlines flight MH370 was shot down near a U.S. military base on the remote island of DIEGO GARCIA. Former Airline CEO Claims US Military Shot Down MH370 Near Diego Garcia. Flight 370 The CIA Hoax: Gordon Duff. Today we are told that the fate of Flight 370 is known, not yet identified debris has been spotted in what is called “the Southern Indian Ocean,” perhaps more appropriately described as “north of Antarctica.” We also know that the 777/200 is a “fly by wire” aircraft with controls in place that allow the CIA to remotely pilot the plane “in case of emergency.” We were able to verify the design and implementation of this system through Boeing, Raytheon and commercial pilots. The descriptions today in the New York Times and other publications are purposefully inaccurate and contradictory.

I may or may not agree with the ad To the people serving these, thanks! Jeffrey's Exif viewer. Jeffrey's Exif viewer. Role of Israel andSoros Exposed by MH370 Twin Jet in Tel Aviv. BANGKOK - It is by no mere coincidence, when telltale evidence of a Mossad role in the MH370 hijack was starting to snowball, that Israel's embassies and consulates were suddenly shut down due to a "strike by diplomatic staff". This fork-tongued alibi was obviously meant to prevent law enforcement agencies across Asia and the Western world from questioning Israeli intelligence agents and military attaches about the whereabouts and fate of the hundreds of passengers. How Crazy Am I to Think I Know Where MH370 Is? *Kinda crazy. Former Airline CEO Claims US Military Shot Down MH370 Near Diego Garcia.

Malaysia Airlines Flight 370 'did not crash': Skeptic CEO offers shocking theory. MH370: Obama Knows Exactly Where It Is, How It Got There (Video) MH370 Hidden Agenda: US Military Tests, 'Unforgivable,' Malaysia PM Top Aide Says. (Before It's News) New Chilling MH370 Diego Garcia Links. (Before It's News) Official: MH370 Military Expertise Hijack. Diego Garcia, High-Value Detainees Rendered More Likely. (Before It's News) Strange Disappearance of Flight MH370. NSA Reply to FOIA Request On MH370: “Currently and properly classified matter.” What does NSA know? Updated May 5, 2014 with Rebuttal Comments -  Is This Why NSA Has Classified All Information About MH370?