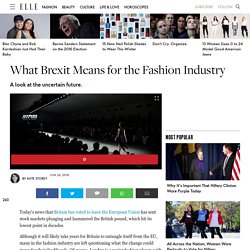 Although it will likely take years for Britain to untangle itself from the EU, many in the fashion industry are left questioning what the change could mean for their livelihoods. Of course, London is a major fashion player, with the fashion industry contributing an estimated $38 billion to the UK economy in 2014, according to the Business of Fashion. Advertisement - Continue Reading Below A weak pound and uncertainty about new tariffs could mean major challenges for UK-based businesses, which often source fabrics and produce in other parts of Europe.

Before last night's vote, the British Fashion Council surveyed its members and found that the vast majority—90% of members—wanted to remain in the EU. This turmoil is predicted to affect prices of items coming into and out of Britain, as well. Getty. Does Fashion Have a Place in Politics? Whilst some may argue that fashion and politics have no business being mentioned in the same sentence- I disagree. 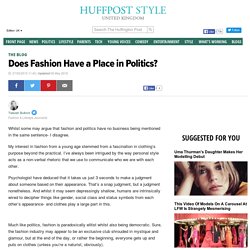 My interest in fashion from a young age stemmed from a fascination in clothing’s purpose beyond the practical. I’ve always been intrigued by the way personal style acts as a non-verbal rhetoric that we use to communicate who we are with each other. Psychologist have deduced that it takes us just 3 seconds to make a judgment about someone based on their appearance. That’s a snap judgment, but a judgment nonetheless. And whilst it may seem depressingly shallow, humans are intrinsically wired to decipher things like gender, social class and status symbols from each other’s appearance- and clothes play a large part in this. Much like politics, fashion is paradoxically elitist whilst also being democratic. But whilst our personal style decisions can be quite subtle and even subconscious, politician’s sartorial choices are often much more considered than it appears. 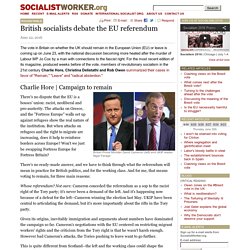 The attacks on Greece, and the "Fortress Europe" walls set up against refugees show the real nature of the institution. But when attacks on refugees and the right to migrate are increasing, does it help to reinforce borders across Europe? Won't we just be swapping Fortress Europe for Fortress Britain? Nigel Farage Says He's Not Giving Up Politics As He Gives Final Speech As Uki... Diane James becomes UKIP leader. Image copyright AFP Diane James has been elected as the new leader of the UK Independence Party. 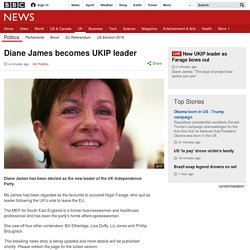 Ms James had been regarded as the favourite to succeed Nigel Farage, who quit as leader following the UK's vote to leave the EU. The MEP for South East England is a former businesswoman and healthcare professional and has been the party's home affairs spokeswoman. She saw off four other contenders: Bill Etheridge, Lisa Duffy, Liz Jones and Phillip Broughton. Bratislava EU meeting: Merkel says bloc in 'critical situation'

The European Union is in a "critical situation", the German chancellor has said, as leaders meet in Slovakia to discuss ways to regain trust after the UK's vote to leave the bloc. 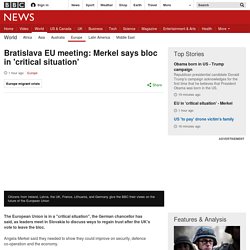 Angela Merkel said they needed to show they could improve on security, defence co-operation and the economy. But EU countries are deeply divided over how to bolster growth and respond to the influx of migrants. Meeting in Bratislava without the UK, they will not discuss Brexit talks. "We need solutions for Europe and we are in a critical situation," Mrs Merkel said as she arrived at the gathering. "You can't solve all Europe's problems in one summit. 'Brutally honest' Even though Britain's referendum result is not on the agenda, and British Prime Minister Theresa May is not attending the summit, there is little doubt that Brexit will overshadow the meeting.

Heavy on symbolism, light on results: By Katya Adler, BBC Europe editor. US election: Donald Trump in excellent health, says his doctor. Republican nominee Donald Trump is in "excellent physical health," according to a letter from his doctor. 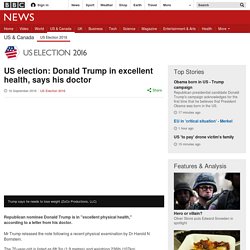 Mr Trump released the note following a recent physical examination by Dr Harold N Bornstein. The 70-year-old is listed as 6ft 3in (1.9 metres) and weighing 236lb (107kg). The letter came as his rival Hillary Clinton returned to the campaign trail after time off with pneumonia appearing in North Carolina and Washington. Boarding a plane in White Plains, New York, she spoke to journalists as she flew to North Carolina to hold a rally, her first campaign event since the weekend. Clinton: 'I tried to power through it' JUDICIAL DICTATORSHIP. US election: Trump campaign acknowledges Obama was born in US. Image copyright Getty Images The Trump campaign has acknowledged in a statement that President Obama was born in the US. 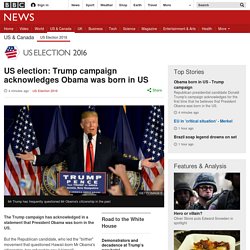 But the Republican candidate, who led the "birther" movement that questioned Hawaii-born Mr Obama's citizenship, has refused to say it himself. His campaign now accuses his Democratic rival Hillary Clinton of introducing the "smear" during the 2008 Democratic nomination contest. There is no evidence to link Mrs Clinton to the birthers. In reaction she tweeted that President Obama's successor "cannot and will not be the man who led the racist birther movement". Does it matter where a country's leader is born? The BBC's North America Reporter Anthony Zurcher says the statement signed by senior Trump advisor Jason Miller is far from an admission of error.

Instead, our correspondent says, Mr Miller laid the genesis of the birther rumours wrongfully at the feet of Hillary Clinton and her 2008 presidential campaign team.