Samsung sees a bright future in potential displays. Watch This Pen Draw Objects In Midair [Video] Apple Helmet Jumps In Augmented-Reality Race. Sony’s patent suggests incentives for online gamers to meet in real-life. Tweet For Tea. 5 Computer Science Awards That Show Us The Future Of Technology. They are not the Oscars or the Grammy’s. Heck, they aren’t even the Webbies or the Appy Awards for the man on the street. But just like the relatively obscure names you might have encountered in the list of 10 Famous Geeks Who Changed The World, the computer science awards on this list are doing their own quiet bit to promote innovation and invention.

In turn, the innovations and inventions are changing our future. How Nvidia’s Kepler chips could end PCs and tablets as we know them. Last week, Nvidia launched the first graphics processing unit (GPU) designed for the cloud, dubbed Kepler. 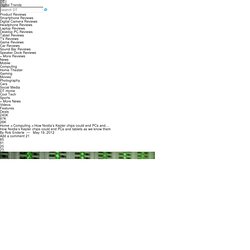 Supporting vendors include a who’s who of server providers, such as HP, Dell, Cisco, and IBM — all of which will have products on the market shortly. The whole concept behind these servers is to serve up a desktop experience from the cloud. This means delivering games, applications, utilities, and media to any device that will run the client: iPads, iPods, Android tablets, smartphones, and even cars and smart TVs. Augmented Reality. PopSci's Future Of: Computers Take Over the World : Videos. Leap Motion. Autodesk 123D. Google Reveals its Wildest Invention Ever - 'Project Glass' What do you get when you combine wearable glasses with Augmented reality? 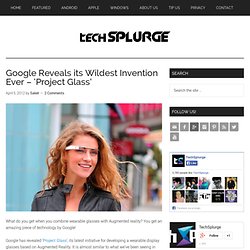 You get an amazing piece of technology by Google! Google has revealed ‘Project Glass’, its latest initiative for developing a wearable display glasses based on Augmented Reality. It is almost similar to what we’ve been seeing in movies for years, like Robocop. Augmented what? Augmented Reality is a technology that combines the physical real-world environment with interactive digital data providing you with information. 12 Events That Will Change Everything, Made Interactive. More EXOdesk details spill: at least two models in the works, ViewSonic wants in. Oblong Has Built The Future Of Computing. I’ve Seen It. Used It. It’s Beautiful. “This is the next Macintosh-level of disruption.” 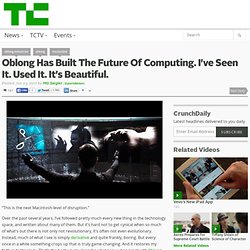 Over the past several years, I’ve followed pretty much every new thing in the technology space, and written about many of them. But it’s hard not to get cynical when so much of what’s out there is not only not revolutionary, it’s often not even evolutionary. Instead, much of what I see is simply derivative and quite frankly, boring. Dawn of a New Day « Ray Ozzie.

To: Executive Staff and direct reports Date: October 28, 2010 From: Ray Ozzie Subject: Dawn of a New Day Five years ago, having only recently arrived at the company, I wrote The Internet Services Disruption in order to kick off a major change management process across the company. 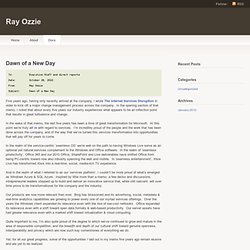 Dundee University invents Dr Who Sonic Screwdriver. Those of you who follow the good doctor’s adventures on the TV (Dr Who, who else? 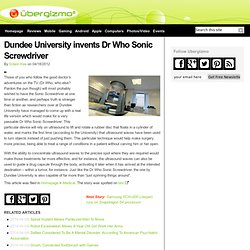 The Future of the Internet. Advertisement “In only a few short years, electronic computing systems have been invented and improved at a tremendous rate. 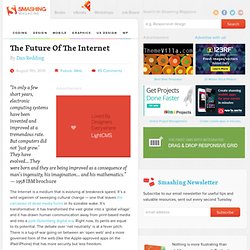 But computers did not ‘just grow.’ Full Surface Induction Cooktop Gives You the Freedom To Place Your Pots Anywhere. Recorded Future Attempts To Unlock The Predictive Power Of The Web. Startup Recorded Future scans the Internet for references about future events so you don't have to. What’s going to happen tomorrow? The Age Of Relevance. Editor’s note: This is a guest post submitted by Mahendra Palsule, who has worked as an Editor at Techmeme since 2009. 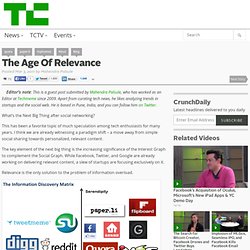 Apart from curating tech news, he likes analyzing trends in startups and the social web. He is based in Pune, India, and you can follow him on Twitter. What’s the Next Big Thing after social networking? This has been a favorite topic of much speculation among tech enthusiasts for many years. I think we are already witnessing a paradigm shift – a move away from simple social sharing towards personalized, relevant content. New spray-on batteries could revolutionize energy storage. By Dakota Torres on 07/02/2012 Renewable energy has been one of the most researched topics ever since gas and oil prices have begun to rise and people have paid attention to their effects on the environment. 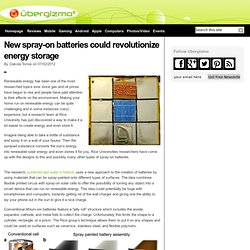 Making your home run on renewable energy can be quite challenging and in some instances (very) expensive, but a research team at Rice University has just discovered a way to make it a lot easier to create energy and even store it. Imagine being able to take a bottle of substance and spray it on a wall of your house. Then the sprayed substance converts the sun’s energy into renewable solar energy and even stores it for you. Rice Universities researchers have come up with the designs to this and possibly many other types of spray-on batteries. The research, published last week in Nature, uses a new approach to the creation of batteries by using materials that can be spray-painted onto different types of surfaces.