Free Beginners Computer Tutorials and Lessons. The Forum at Harvard School of Public Health. Summary Amid controversy, a cadre of experts are expected to meet in February at the World Health Organization to debate the publication of experiments that made a deadly form of bird flu more contagious in mammals in an effort to understand mechanisms of its evolution. 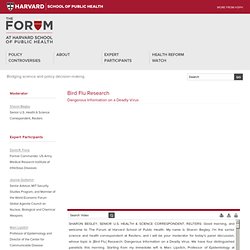 Worries that the data and research could lead to a blueprint for a bioweapon or an accidental pandemic have fueled concerns. Recently, a federal advisory board recommended that some details of the research not be made public. In January, the scientists who conducted the as-yet-unpublished experiments announced in the journals Science and Nature their decision to “pause” research involving the viruses for 60 days. Other experts have asserted that the risks have been exaggerated. Part of: The Andelot Series on Current Science Controversies.

Presented in Collaboration with Reuters Background Articles Image Credit: Cynthia Goldsmith/CDC. Manipulation of The People - Rudiments of Propaganda. Despite living in "the free world", there are very few free men and women walking around in our democracies. 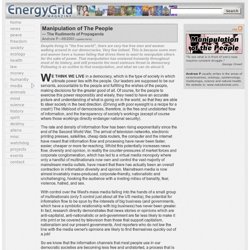 Very few indeed. This is because some men and women have a human failing that drives them to want to manipulate others for the sake of power. That manipulation has enslaved humanity throughout most of its history, and still presents the most ominous threat to democracy. Following is an outline to that manipulation, and what we can do about it.

Nanotech breakthrough: get ready for graphene. The exciting one-atom thick super material can now be produced in ample quantities and high quality. 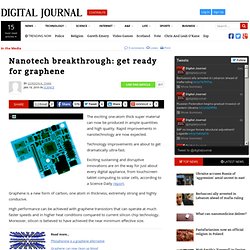 Rapid improvements in nanotechnology are now expected. Technology improvements are about to get dramatically ultra-fast. Exciting sustaining and disruptive innovations are on the way for just about every digital appliance, from touchscreen tablet computing to solar cells, according to a Science Daily report. Graphene is a new form of carbon, one atom in thickness, extremely strong and highly conducive. Alcubierre Warp Drive Time Travel. An Alcubierre Warp Drive stretches spacetime in a wave causing the fabric of space ahead of a spacecraft to contract and the space behind it to expand. 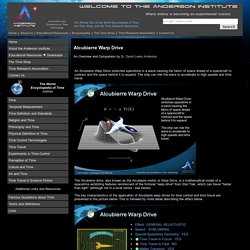 The ship can ride the wave to accelerate to high speeds and time travel. The Alcubierre drive, also known as the Alcubierre metric or Warp Drive, is a mathematical model of a spacetime exhibiting features reminiscent of the fictional "warp drive" from Star Trek, which can travel "faster than light" (although not in a local sense - see below). The key characteristics of the application of Alcubierre warp drives for time control and time travel are presented in the picture below. This is followed by more detail describing the effect below. 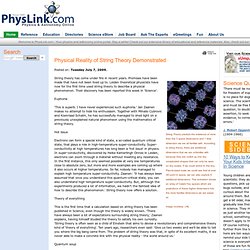 String theory has come under fire in recent years. Promises have been made that have not been lived up to.

OUR FUTURE -YOU TUBE- VIDEOS. OUR FUTURE-TED VIDEOS. Khan Academy. The Future is Now: CES 2012 Video Sneak Peek CIO. Animated reconstruction of evolution BBC science Video. Interactive projector that turns any flat surface into a touch screen wins UK design award - Image 8 of 8. Light Touch transforms a projected image into a virtual 10-inch touch screen Image Gallery (8 images) Light Blue Opitcs (LBO) has won the Institution of Engineering and Technology (IET) Innovation Awards 2010 prize for Product Design with its Light Touch interactive projector. The device uses an infra-red touch sensing system that transforms a projected image into a virtual 10-inch touch screen. It allows users to interact with multimedia content and applications by touching the image, which can be projected onto any flat surface.

Nanotech breakthrough: get ready for graphene.

LIFE, NO DEPOSIT-LOTS OF RETURNS

FIRST AID. homeopathy. SOLAR OVEN,SIGNALING,TORNADO, TSUNAMI. TONY ROBBINS. Image of the the Day - Gallery. Extreme Planet Makeover. Space the final frontier (learn more about space and technology) Nutrition. NASA. Holograms On iPad Demo'd On Video. I’ve heard many people taking about technology as a whole and that it’s not advancing as fast as in recent years which will eventually lead to a stagnation. 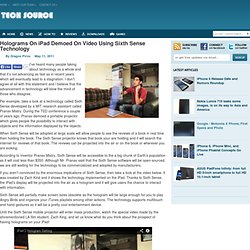 I don’t agree at all with this statement and I believe that the advancement in technology will blow the mind of those who disagree. Per example, take a look at a technology called Sixth Sense developed by a MIT research assistant called Pranav Mistry. During the TED conference a couple of years ago, Pranav demoed a portable projector which gives people the possibility to interact with objects and the information displayed by the objects. When Sixth Sense will be adopted at large scale will allow people to see the reviews of a book in real time then holding the book.

The Sixth Sense projector knows that book your are holding and it will search the internet for reviews of that book. According to inventor Pranav Mistry, Sixth Sense will be accessible to the a big chunk of Earth’s population as it will cost less than $350. Spacetime invisibility cloaks can hide entire events inside temporal voids.