Raising Awake Children in a Broken School System. This Letter About Corporate Involvement in Education Policy Should Go Viral. Paul Horton, a history teacher at the University of Chicago Lab School, wrote a letter to Senator Tom Harkin of Iowa, the top-ranking Democrat on the Senate committee on Health, Education, Labor, and Pensions (HELP), when the Senator announced his intention to retire. 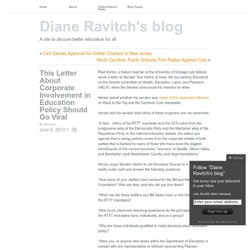 Horton asked whether the senator was aware of the corporate influence on Race to the Top and the Common Core standards. The Uneducated Educator - Tales and stories of a continuing journey. In Pursuit of Happiness. The Right Kind of Testing. Our schools need more testing. 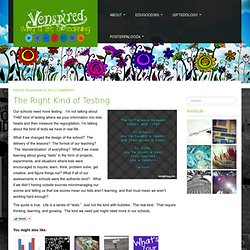 [New post] Sickest Testing Story of All Time - maiziea - Gmail. A message to parents from your child's teacher. Student advice on transforming education. Oh, Dr. Seuss. They’ve turned our country into Flobbertown. Is It Time We Threw Standardized Testing Out the Door? Dr. 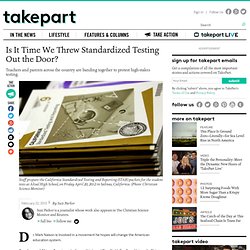 Mark Naison is involved in a movement he hopes will change the American education system. A professor of African-American studies and history at New York’s Fordham University, Naison wants to see less standardized tests in the classroom. “You should organize the school experience around what excites and energizes children—the arts, music, physical activity, hands-on science, collaborative learning—and do project-based assessment by teachers and school administrators, with standardized tests on a state or national level reduced to a minimum,” Naison told TakePart. He isn’t alone. Students, parents and teachers around the country are saying enough to standardized testing. What To Expect From Education In 2013. Guessing what the future of education holds is equal parts logic and guesswork. 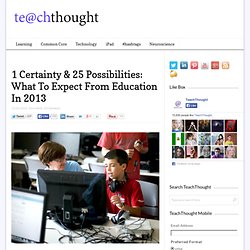 The logical part is simpler–take current trends and trace their arc further, doing your best to account for minor aberrations. What 100 Experts Think About The Future Of Learning. If you’re an educator, surely you know that technology has and will continue to have an incredible impact on learning. 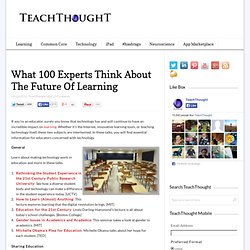 Whether it’s the Internet, innovative learning tools, or teaching technology itself, these two subjects are intertwined. In these talks, you will find essential information for educators concerned with technology. General Learn about making technology work in education and more in these talks. Rethinking the Student Experience in the 21st Century Public Research University: See how a diverse student body and technology can make a difference in the student experience today.

EDUCATION FOR A SUSTAINABLE FUTURE. An Open Letter to Educators. Richard D. Kahlenberg Reviews "Whither Opportunity?" WHEN MITT ROMNEY recently announced his education platform—more school choice, greater emphasis on charter schools, a tough line on teacher performance, and skepticism about teachers unions—it was widely noted that this array of policies was not much different from those advanced by the incumbent president. 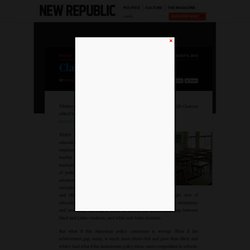 For Back to School, Reimagine Classroom Design. Teaching Strategies. 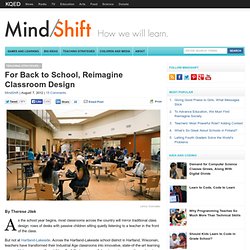 Joel Klein, Sal Khan And Sebastian Thrun On Inventing The Future Of Education, At Disrupt SF. Three trailblazing figures in educational technology are showcasing the future of learning at our upcoming annual conference, Disrupt San Francisco. 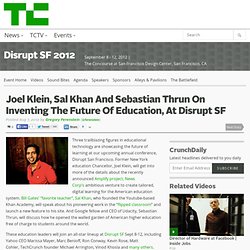 Former New York education Chancellor, Joel Klein, will get into more of the details about the recently announced Amplify project, News Corp’s ambitious venture to create tailored, digital learning for the American education system. Piping Up : Thérèse Blogs. Posted by Therese on Thursday, August 2, 2012 It’s never too late for a career change, which is why I am going to stop writing and get myself a job at Challenge Plumbing. 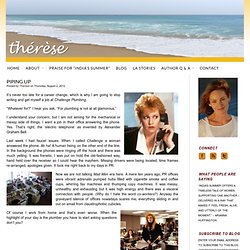 “Whatever for?” I hear you ask, “For plumbing is not at all glamorous.” I understand your concern, but I am not aiming for the mechanical or messy side of things. I want a job in their office answering the phone. Last week I had faucet issues. Now we are not talking Mad Men era here. The Best Posts & Articles Explaining Why Schools Should Not Be Run Like Businesses. It’s not uncommon to hear that our schools need to be run more like businesses. 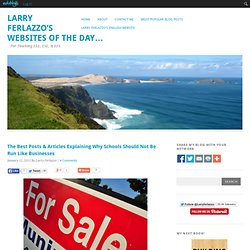 That argument holds a lot of appeal to some people (including, but not limited to, people who might make a profit out of it). I thought I’d bring together a few resources that provide a counterpoint to those beliefs. Design Thinking for Educators. Strong Performers and Successful Reformers in Education. In today’s global economy, countries need high-quality education systems that will teach their citizens the skills necessary to meet the challenges of tomorrow. This series of videos, produced jointly by the OECD and the Pearson Foundation, highlights initiatives being taken by education authorities around the world to help school students do better.

The school systems featured were chosen for their strong performance in the OECD’s Programme for International Student Assessment (PISA). Every three years, PISA evaluates the skills of 15-year-old secondary students in three basic areas: reading, mathematics and science. Pencil-and-paper tests assess how well they analyze problems, seek solutions and communicate ideas. Around half a million students participated in the latest round, carried out in 2009 in some 70 countries and economies. The best systems deliver strong and equitable learning outcomes across widely varying cultural and economic contexts. Germany Takes On Education Reform (Education Everywhere Series) Gerhard Leisenheimer: We enrolled in the "Responsible Schools" pilot program because we are a team of teachers who really want to excel in teaching and pedagogy.

Related:  What 100 Experts Think About The Future Of Learning   -  Education   -  Enterprise