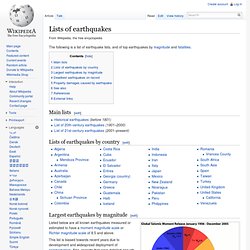 The blue graph shows the apparent percentage (not the absolute number) of marine animalgenera becoming extinct during any given time interval. 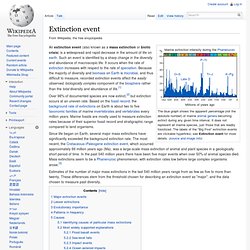 It does not represent all marine species, just those that are readily fossilized. The labels of the "Big Five" extinction events are clickable hyperlinks; see Extinction event for more details. (source and image info) Since life began on Earth, several major mass extinctions have significantly exceeded the background extinction rate. The most recent, the Cretaceous–Paleogene extinction event, which occurred approximately 66 million years ago (Ma), was a large-scale mass extinction of animal and plant species in a geologically short period of time.

List of largest volcanic eruptions. The 1991 eruption of Mount Pinatubo, the largest eruption since 1912, is dwarfed by the eruptions in this list In a volcanic eruption, lava, tephra (volcanic bombs, lapilli, and ash), and various gases are expelled from a volcanic vent or fissure. 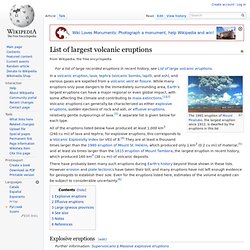 While many eruptions only pose dangers to the immediately surrounding area, Earth's largest eruptions can have a major regional or even global impact, with some affecting the climate and contributing to mass extinctions.[1][2] Volcanic eruptions can generally be characterized as either explosive eruptions, sudden ejections of rock and ash, or effusive eruptions, relatively gentle outpourings of lava.[3] A separate list is given below for each type. 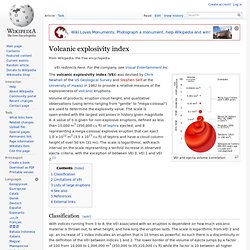 For the company, see Visual Entertainment Inc. VEI and ejecta volume correlation The volcanic explosivity index (VEI) was devised by Chris Newhall of the US Geological Survey and Stephen Self at the University of Hawaii in 1982 to provide a relative measure of the explosiveness of volcanic eruptions. Volume of products, eruption cloud height, and qualitative observations (using terms ranging from "gentle" to "mega-colossal") are used to determine the explosivity value. The scale is open-ended with the largest volcanoes in history given magnitude 8. Cumbre Vieja. Cumbre Vieja (Spanish: Old Summit) is an active volcanic ridge on the volcanic ocean island of Isla de La Palma in the Canary Islands, Spain. 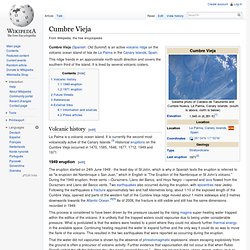 This ridge trends in an approximate north-south direction and covers the southern third of the island. It is lined by several volcanic craters. Canary Island Mega Tsunami. How Far Inland Would A 300 Foot Tsunami Go On The East Coast? 300 Foot Tsunami and East Coast Destruction. December 28, 2013, by Ken Jorgustin ‘Hierro’, a volcano and island of the Canary Islands of Spain (named ‘El Hierro’), summits at 1500 meters (4,900 feet), and has gone through periods of highly active earthquake swarms – which leads some to believe that ‘something’ is about to happen. 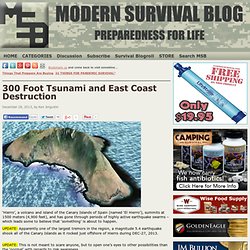 UPDATE: Apparently one of the largest tremors in the region, a magnitude 5.4 earthquake shook all of the Canary Islands as it rocked just offshore of Hierro during DEC-27, 2013. UPDATE: This is not meant to scare anyone, but to open one’s eyes to other possibilities than the ‘normal’ with regards to risk awareness. Tsunamis Could Hit US East Coast. Although the risk is small, tsunamis are possible on the East Coast of the United States from a variety of sources, according to new research. 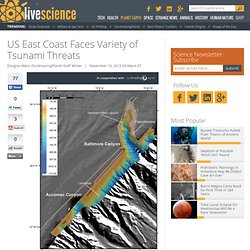 And as Hurricane Sandy showed, the region is completely unprepared for a major influx of water, said U.S. Geological Survey researcher Uri ten Brink. The most likely source for an East Coast tsunami would be an underwater avalanche along the continental slope, according to research presented by ten Brink and others earlier this month at the annual meeting of the Geological Society of America in Charlotte, N.C. Ten Brink also outlined several other possible sources of tsunamis, including earthquakes and even collapsing volcanoes. Underwater avalanches An offshore earthquake of magnitude 4.5 or above could cause submarine avalanches and create dangerous tsunamis with waves higher than 26 feet (8 meters), ten Brink told OurAmazingPlanet. Tsunami Risk for the East Coast of the USA.

How realistic is the threat of a “mega-tsunami” to the eastern seaboard of North America? 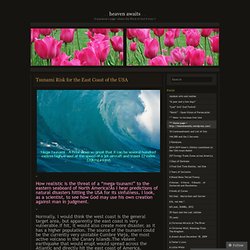 As I hear predictions of natural disasters hitting the USA for its sinfulness, I look, as a scientist, to see how God may use his own creation against man in judgment. Normally, I would think the west coast is the general target area, but apparently the east coast is very vulnerable.If hit, it would also create more disaster, as it has a higher population. A Skeptic Looks at Alternative Energy. Infographic: Bryan Christie Design; Data Source: Vaclav Smil Two rising powers, China and India, together outweigh the United States in carbon emissions. Click on image for enlargement. It took 30 years—since the launch of small, modern wind turbines in 1980—to reach even that modest percentage. By comparison, nuclear power had accounted for 20 percent of all U.S. generation within 30 years of its launch in 1957, and gas turbines achieved 10 percent three decades after they went into operation in the early 1960s. Projections of wind-power generation into the future have been misleadingly optimistic, because they are all based on initial increases from a minuscule base.

A thought on tomorrows landscape. Vaclav Smil. Vaclav Smil is a Czech-Canadian scientist and policy analyst.[1] He is Distinguished Professor Emeritus[2] in the Faculty of Environment at the University of Manitoba in Winnipeg, Canada. 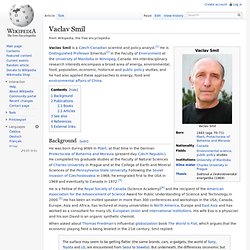 His interdisciplinary research interests encompass a broad area of energy, environmental, food, population, economic, historical and public policy studies, and he had also applied these approaches to energy, food and environmental affairs of China. Background[edit] He was born during WWII in Plzeň, at that time in the German Protectorate of Bohemia and Moravia (present-day Czech Republic). Tomorrow is built today. The World in 2030: Four scenarios for long-term planning and strategy.

By Ross Dawson Recently I did the opening keynote to the top executive team of a major organization at their strategy offsite. 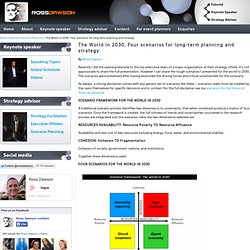