Kinetic Architecture – Discussion 6. ArchitectureWeek DesignCommunity. Nsabir, Kinetic architecture is useful and benificial, becuase it will evolve to become an essential architectural principle within the digital revolution. 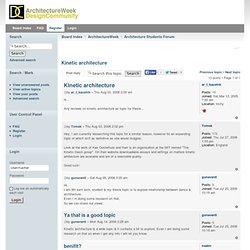 Just imagine for example, a building that could change it's shape for flexibility and for purposes in relation to external weather conditions. A building by day could be a nursery and change by night to become a garage thus halfing land use, maximising flexibility, reducing energy to get into the real mechanics of sustainbility, land shortage and peoples needs. Another scenario is in places where earthquakes are common. A buiilding could react to this situation saving lifes in the long run. View topic - kinetic architecture - Architecture Discussion Forums - Archiseek.com. 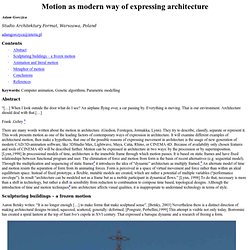 MPOp : Kinetic Architecture - Kinetic Principles in Nature. About Nature Motion is essential to all life. 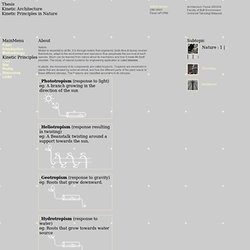 It is through motion that organisms (both flora & fauna) nourish themselves, adapt to the environment and reproduce thus perpetuate the survival of each species. Designing kinetics for architectural facades by Ani Arzumanyan. Kinetic Architecture: Design for Active Envelopes - Charles Linn. Charles D. 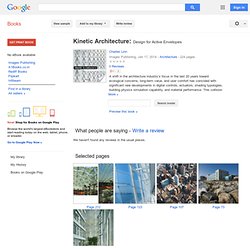 Linn, FAIA, is an architect who has specialized in architectural journalism for nearly 30 years. He worked for McGraw-Hill Construction between 1991 and 2010. Designing Kinetics for Architectural Facades: State Change - Jules Moloney. Amazon. Kinetic Architecture: Designing with Movement by Carolina Stevenson. Academia.edu - Share research. 40 Awesome Futuristic City Illustrations. Cities have always been a place where people share ideas and knowledge. 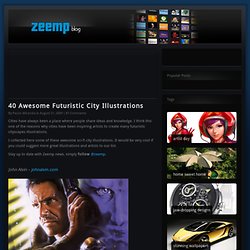 I think this one of the reasons why cities have been inspiring artists to create many futuristic cityscapes illustrations. I collected here some of these awesome sci-fi city illustrations. It would be very cool if you could suggest more great illustrations and artists to our list. Stay up to date with Zeemp news, simply follow @zeemp. John Alvin – johnalvin.com James Paick – scribblepadstudios.com Robert Brown – robertdbrown.com Rob Sullivan – robsdesign.co.uk Hideyoshi Ruwwe – hideyoshi-ruwwe.net. The year 2000 as envisioned in the year 1910. 45 Incredible Futuristic Scifi 3D City Illustrations. Futuristic cities have always fascinated me, as a fan of SciFi TV shows, movies, and digital art, futuristic city designs always bring me inspiration. 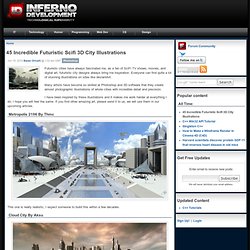 Everyone can find quite a lot of stunning illustrations on sites like deviantArt. Many artists have become so skilled at Photoshop and 3D software that they create almost photographic illustrations of whole cities with incredible detail and precision. The Future. The Future That Never Was - Next-Gen Tech Concepts. The “flying fan” vehicles of the future will be easier to fly than helicopters, and should cost a lot less. 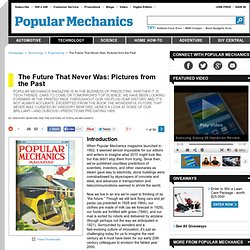 A rough guess is that in about 10 years you’ll be able to buy a four-place fan for the price of a good car. A new kind of flying machine is being designed that sounds like the answer to your desires for a personal aerial vehicle. It is almost like a flying carpet. A good name for it might be the “flying fan.” It uses the principle of the ducted fan, the same idea that is used by the flying platform. 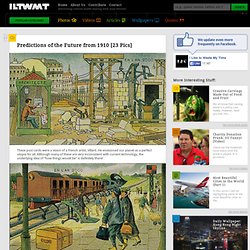 He envisioned our planet as a perfect utopia for all. Although many of these are very inconsistent with current technology, the underlying idea of “how things would be” is definitely there! See more photo posts Like our Facebook page & receive daily updates on your wall: Art that Speaks a Thousand Words [36 Pics] May 18 2012 Pawel Kuczynski is an extremely talented Polish artist that specializes in satirical art. 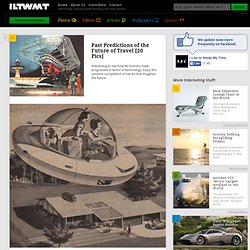 Enjoy this random compilation of old art that imagines the future. See more photo posts Like our Facebook page & receive daily updates on your wall: Closer Than We Think! Retrofuturistic Tech Predictions. If there is one thing that has remained constant throughout the ages, it’s our capacity for envisioning what might happen in coming years. 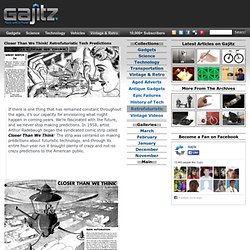 We’re fascinated with the future, and we never stop making predictions. In 1958, artist Arthur Radebaugh began the syndicated comic strip called Closer Than We Think! The strip was centered on making predictions about futuristic technology, and through its entire four-year run it brought plenty of crazy and not-so crazy predictions to the American public. Radebaugh was surprisingly right on target with some of his predictions, such as factory farms and super-tiny televisions. Changes to Come: 9 Past Predictions for Funky 70s Tech. In 1962, the exciting world of the future was just within reach. We assumed that by 1975 the world would be a new and wonderful place full of all kinds of gadgets to make life easier and more interesting. These pictures are from a 1962 book called 1975: And the Changes to Come by Arnold B. Barach. Forecasting the Future: 7 Past Visions of 21st Century Life. At the dawn of the 20th century, technology was booming and it seemed that anything was possible for the future.

Outlandish contraptions featured in just about every prediction of what the future would bring. These postcards were produced by German chocolate company Hildebrands in the beginning of the 20th century and pictured what life would be like in the year 2000. Urban Airports: Past Predictions for Future Flight Fields. Today’s airports tend to be situated away from city centers, out in the suburbs or, even better, in the house-free industrial areas surrounding cities.

The reasons are obvious: noise and safety concerns make it sensible to keep the airports out of city centers. But at one time, the future of airports seemed to be putting them right in the middle of the busiest parts of cities. Predictions From The Father of Science Fiction. KineticArchitecture.Net. Kinetic architecture. The Burke Brise soleil sits atop the Milwaukee Art Museum - it folds its wings over the museum to protect it at night and can also use its wings to shield visitors from the sun or from rain storms. Kinetic architecture is a concept through which buildings are designed to allow parts of the structure to move, without reducing overall structural integrity. A building's capability for motion can be used just to: enhance its aesthetic qualities; respond to environmental conditions; and/or, perform functions that would be impossible for a static structure. The possibilities for practical implementations of kinetic architecture increased sharply in the late-20th century due to advances in mechanics, electronics, and robotics.

History[edit] An early instance of kinetic architecture - the drawbridge. How Kinetic Architecture Can Redefine Folding Space through Variation. Smartlab Portal > Students > Master Thesis > Students 2008 - 2009 > Kinetic architecture: a twisting steel bridge. Introduction Since the Industrial Revolution, the world is developing at a growing speed. The intensification of social, economical and urban changes, coupled with issues of sustainability, amplify the demand for architectural solutions that accommodate change. Kinetic Architecture offers the promise of easy, rapid and reversible mechanical transformations in response to changing programs and human needs.