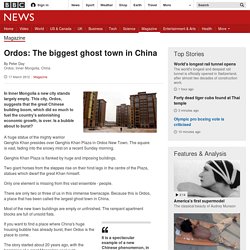 This city, Ordos, suggests that the great Chinese building boom, which did so much to fuel the country's astonishing economic growth, is over. You're surrounded! Hard-line developers in China divert a RIVER to encircle householders who refused to move from 900-year-old village. By Leon Watson Published: 13:47 GMT, 7 February 2013 | Updated: 15:02 GMT, 29 May 2013 This could be the most extreme case yet of Chinese authorities putting pressure on residents whose homes are in the way of development projects. 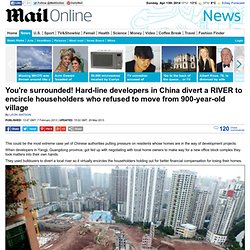 When developers in Yangji, Guangdong province, got fed up with negotiating with local home owners to make way for a new office block complex they took matters into their own hands. They used bulldozers to divert a local river so it virtually encircles the householders holding out for better financial compensation for losing their homes. Nail houses are isolated by man-made ditches on the site of a reconstruction project in Yangji village, Guangzhou city 'The ditch is as deep as a man and twice that wide. 'They've already cut off most of the electricity and the fresh water and we're struggling to survive.

The quaint English market community that's 5,700 miles out of place: Thames Town in China is the ultimate cultural knock-off. By Daily Mail Reporter Published: 11:47 GMT, 6 May 2013 | Updated: 12:15 GMT, 7 May 2013 China is notorious for making knock-off designer clothes and high-end electronics. 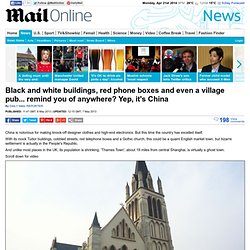 But this time the country has excelled itself. With its mock Tudor buildings, cobbled streets, red telephone boxes and a Gothic church, this could be a quaint English market town, but bizarre settlement is actually in the People's Republic. And unlike most places in the UK, its population is shrinking. Scroll down for video. Massive hole left in Chinese street after foundations crumble and three shops collapse 30ft into the ground. Builders working on a metro tunnel nearby noticed the land sinking and evacuated the areaNo one was injured and emergency workers poured concrete into the ground to prevent further accidentsIt is the latest in a series of problems for China's construction industrySix motorway bridges have collapsed since July and an explosion at a coal mine in August killed 26 workers. 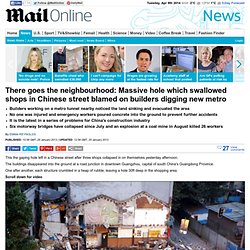 Daring architecture or over-sized monstrosities that look plainly ridiculous? The giant buildings that are popping up all over China. By Leon Watson Published: 21:41 GMT, 6 May 2013 | Updated: 11:47 GMT, 7 May 2013 Some of these spectacular buildings epitomise the daring architecture we have come to expect from the nation that gave us the magnificent Bird's Nest stadium. 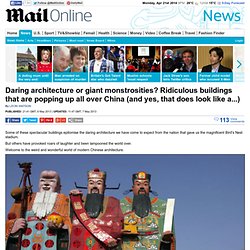 But others have provoked roars of laughter and been lampooned the world over. Welcome to the weird and wonderful world of modern Chinese architecture. Would you want to live on a housing estate like this? New Chinese 'villas' look more like concrete slums. By Simon Tomlinson Published: 13:00 GMT, 22 January 2013 | Updated: 18:10 GMT, 22 January 2013 They have been billed as villas, but that would be using the loosest sense of the word. 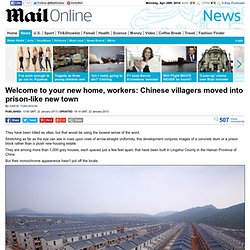 Stretching as far as the eye can see in rows upon rows of arrow-straight uniformity, this development conjures images of a concrete slum or a prison block rather than a plush new housing estate. They are among more than 1,000 grey houses, each spaced just a few feet apart, that have been built in Lingshui County in the Hainan Province of China. But their monochrome appearance hasn't put off the locals. Grey matter: Rows upon rows of villas stretch for as far as the eye can see at the new Dadun Village development in Lingshui, Hainan Province of China They're consistent at least: Around 3,500 villagers have started to move into 1,029 new villas, each of which measures 253 square metres. New South China Shopping Mall still empty seven years after it opened in Dongguan, China. 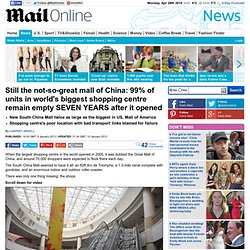 New South China Mall: An Update On The World’s Largest (Ghost) Mall. They were going for a monument, and a monument was what they got. 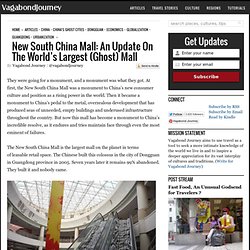 At first, the New South China Mall was a monument to China’s new consumer culture and position as a rising power in the world. Then it became a monument to China’s pedal to the metal, overzealous development that has produced seas of unneeded, empty buildings and underused infrastructure throughout the country. But now this mall has become a monument to China’s incredible resolve, as it endures and tries maintain face through even the most eminent of failures. The New South China Mall is the largest mall on the planet in terms of leasable retail space. Chinese Google Earth mystery: Ex-CIA analyst spots strange buildings in the middle of the desert. Unidentified buildings found in desert in southwest ChinaComplex of roads and houses spotted on Google Earth by ex-CIA analystAppears to have been built 'in a hurry' but no answers as to what it may be By Sara Malm Published: 17:03 GMT, 9 January 2013 | Updated: 08:20 GMT, 10 January 2013 Satellite images taken by Google Earth have unveiled a mystery construction complex in the middle of the Chinese desert. 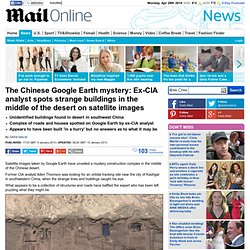 Former CIA analyst Allen Thomson was looking for an orbital tracking site near the city of Kashgar in southwestern China, when the strange lines and buildings caught his eye. What appears to be a collection of structures and roads have baffled the expert who has been left puzzling what they might be. On the map: The complex of roads and large buildings in the middle of the desert in south China to which there appears to be no explanation ‘I haven’t the faintest clue what it might be,’ he told Wired magazine. Chinese company plans to build world's tallest skyscraper - in just THREE MONTHS. Sky City will stand 2,749ft tall and have a phenomenal 220 floorsIt will house 17,400 people as well as offices, schools and even a hospitalBuilders intend to put it up at an amazing five storeys a DAY By Damien Gayle Published: 13:22 GMT, 21 November 2012 | Updated: 16:32 GMT, 21 November 2012 A construction company yesterday revealed plans to build the world's tallest skyscraper - in just three months. 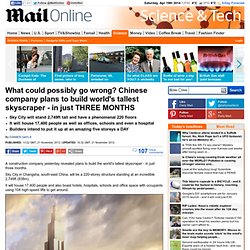 Sky City in Changsha, south-east China, will be a 220-storey structure standing at an incredible 2,749ft (838m). It will house 17,400 people and also boast hotels, hospitals, schools and office space with occupants using 104 high-speed lifts to get around. Road built around building as couple refuse to move in China. An elderly couple refuse to move as a road is built around their apartmentThey insist the government's relocation compensation is not enough By Alex Ward Published: 10:27 GMT, 22 November 2012 | Updated: 11:26 GMT, 24 November 2012 A lone apartment building stands in the middle of a newly built road after an elderly couple refused to relocate. Luo Baogen and his wife insist on living in the half-demolished building in the city of Wenling, in Zhejiang province, China because they believe that the relocation compensation offered by the government is not enough.

Now the only building left standing, the five storey block is a strange sight as cars drive around it while the couple remain living inside. Scroll down for video An elderly couple refused to leave despite plans for the road a railway station to be built directly where the building stands To ensure the couple’s safety, adjacent rooms in the building have been left intact but all their neighbours have moved out, according to local media. Made in China: Motorway collapses 10 months after it is built - but they manage to build world's largest armchair. Motorway collapse is one of a string of recent transport disasters in ChinaFears raised over safety standards on country's road and rail networkTragedy follows unveiling of 'world's largest armchair' in Shanghai By Sam Adams Published: 10:33 GMT, 24 August 2012 | Updated: 10:35 GMT, 28 August 2012 China's economy is continuing to grow at breakneck speed but - as these pictures show - the giant nation's infrastructure is quite literally buckling under the strain.

But that was no such hurdle for the residents of these extraordinary villas. While there may not have been any suitable square footage at ground level, they have instead built their homes on the roof of a shopping centre. A little corner of England? No it's a Chinese knock-off! Architects in Shanghai create traditional village of mock Tudor homes, local pub and cobbled streets. Thames Town looks like an English town, but it is located 5,700 miles awayDevelopment 19 miles from central Shanghai has few residents and is virtually a ghost town By Rob Preece Published: 19:43 GMT, 8 August 2012 | Updated: 10:45 GMT, 9 August 2012 With mock Tudor buildings, cobbled streets, red telephone boxes and a Gothic church, it could be a quaint English town.

The Great Halls of China: Beijing builds country's most expensive estate in the style of British stately homes. By Sara Malm Published: 12:56 GMT, 30 July 2012 | Updated: 13:22 GMT, 30 July 2012 The Western-style mansions with tall columns and impressive entrances wouldn’t look out of place on a sprawling English estate, however these are being built in China. Chinese city where homes tremble from motorway built just feet above their living rooms. By Graham Smith and Emily Allen. Is China's Architectural Ambition Leaving Its Own Talent Behind? These days, fanfare and trumpets typically accompany architects when they begin new projects in China — and with good reason. In recent years, China, along with a smattering of other regions including the Middle East and Russia, has become a global architectural frontier, with star architects like Rem Koolhaas, Paul Andreu and Norman Foster all leaving their mark on the nation's rapidly expanding cities.

Take a look inside the world's biggest building: Chinese dome houses a shopping centre, Mediterranean village, water park, ice-skating rink, and multiple hotels. New Century Global Center is world's largest freestanding building capable of fitting 20 Sydney Opera Houses insideThe massive glass dome fits in a shopping centres, hotels, a water park and a village on 19m sq.ftThe 100metre high glass ceiling comes with its own artificial sun which will keeps visitors warm 24 hours a day. China Rebuilds - Photo Essays. Spectacular frozen waterfall created in China by resident, 58, who left tap on all winter. It came out of seventh-floor resident Wen Hsu's flat after he left the tap on58-year-old was last remaining resident in soon-to-be-demolished buildingWas worried about uninsulated pipes running up through unused homesHe ensured temperature was kept above freezing by switching on the tapThen diverted warm water to flow down side of the building in Jilin, China By Mark Duell Published: 05:13 GMT, 17 April 2013 | Updated: 10:16 GMT, 17 April 2013 Have you ever wondered what might happen if you leave the tap running for too long at home?

This astonishing frozen waterfall was created out of a building in Jilin city in Jilin province, north-east China, after seventh-floor resident Wen Hsu, 58, left the hot tap on all winter. He had lived for 35 years in the property scheduled for demolition to make way for a new shopping centre - and when developers managed to buy all the other flats, he was left as the only resident. Zhang Lin builds mountain on apartment block in Beijing, China, to create dream penthouse. Professor Zhang Lin has spent six years shifting rocks and rubble to the roof to create this mountaintop penthouseThe property has a rocky mountain garden, complete with rubble and shrubbery But residents have described him as a 'menace' after cracks and leaks appeared throughout the apartment block Mr Lin did not have planning permission for the 'extension' and it will be demolished if deemed unsafe.