Being in love with architecture (and an architect)

Britain's brutalist playgrounds – in pictures. Snapshots: Istanbul’s impossibly colourful architecture. Architecture for bikes – in pictures. Flatpack or flexible? Oscar Niemeyer's schools could have lessons for the UK. From now on, our children will be taught in flatpack sheds and converted kebab shops. 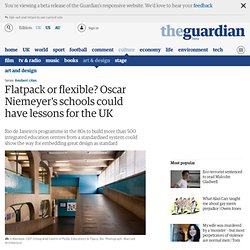 That's the message education secretary Michael Gove has been sending out since he launched his two-pronged vision for schools: to be built from standardised kits, or else to "pop up" in whatever redundant high street unit might be to hand. Triumphantly axing Labour's Building Schools for the Future (BSF) programme, accusing architects of "creaming off cash" and declaring that "we won't be getting any award-winning architects to design your school", Gove seemed to take on the appearance of a surreal pantomime baddie, continually bashing the profession.

Issuing Dickensian diktats about the future of education, his no-frills approach to school building almost descended into farce with the James Review, in which he commissioned an expert in cheap, mass-produced retail sheds to advise on the kinds of spaces that might be good for teaching and learning: big cheap sheds was the inevitable conclusion. Welcome to Toytown: what life is like in new-build Britain. They are selling new houses in Cambourne, Cambridgeshire: two-, three- and four-beds with names such as the Flatford, the Langdale and the Belbury. 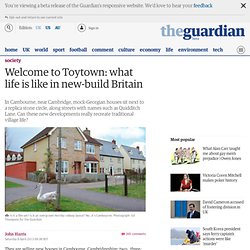 Inside a row of show homes, the decor is a riot of Cath Kidstonesque fabrics, deep reds and bright greens, as fixtures and fittings jump from prewar art deco to 1950s modernism. The Taylor Wimpey brochure advises that its pictures of what's on offer are "from an imaginary viewpoint", intended "to give a feel for the development, not an accurate description of each property". Across a nearby rectangle of grass is a kids' playground, built around a mock stone circle and a climbing frame intended to look like a Spanish galleon. Five minutes' walk away is a road named Quidditch Lane, after the sport in Harry Potter.

Its opening on to a main road is being stalked by a solitary swan, which hisses at me as I walk by. A Bit Of The Cheesegrater Fell Off. Lost and Found in Detroit – in pictures. Ten new year's resolutions for architects in 2014. Don't melt things It might sound obvious, but it's usually good if your buildings don't actively attack their neighbours or melt passing vehicles with laser death rays. 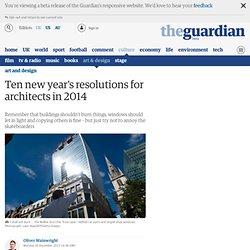 It is a lesson that has evaded Rafael Viñoly, purveyor of “fryscrapers” to London and Las Vegas, who seemingly can't resist channelling the powers of the sun into beams capable of singeing sun-loungers and scorching Jaguars. This year, if you find yourself designing a south-facing concave facade in a highly reflective material, maybe best think again. Or at least don't let “value engineers” remove the sunshades. Be nice to old buildings They were there before you, and the chances are they're better made and more beautiful than anything you will be able to replace them with, so treat listed buildings nicely. Don't stand for modern-day slavery Be nice to skateboarders. The end of FAT: architecture's biggest pranksters call it quits – boyband style. They have built a romanesque church out of sparkly blue sequins, a school that looks like a gothic wedding cake and turned the head of Hercules into a squishy seat. 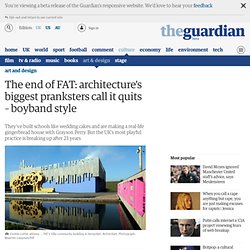 Now, in an unexpected twist, the mischievous London architecture practice FAT has announced it will be no more. Architects usually die, divorce, or go bust – so why the boyband-style break-up? “We all feel we've completed what we set out to do,” says Sam Jacob, who has worked with fellow partners Sean Griffiths and Charles Holland for the last 23 years on everything from art installations to social housing, alongside a prolific volume of writing and teaching. “FAT was only ever intended to be a project, a way of taking a set of ideas out into the world,” he says. “We still can't believe we've had so many opportunities to make buildings.” “When I spoke to Grayson Perry he said, 'You know that what I hate above all are those sleek cool white glass and steel modernists. The Shard can eat its heart out – this is Britain's beauty. The 2013 Stirling prize for architecture, announced last week, received almost no publicity. 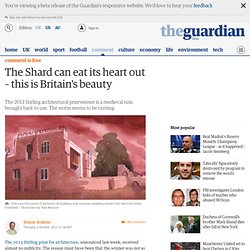 The reason must have been that the winner was not so much a building as architecture itself. This should have made it all the more significant. Nekta - Here's Us. Zaha Hadid: queen of the curve. Zaha Hadid was flying to Frankfurt to give a talk, in which I was her interlocutor. 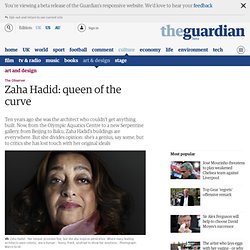 Her plane taxied from its stand, developed a minor fault, and stopped. She refused to believe the reassurances that the delay would be brief, and demanded that she be put on another flight. Her wish was impossible – to return to the stand, to unload and reload her baggage in the hold, it couldn't be done – but Hadid insisted, vigorously. The cabin staff tried to calm her, warn her, admonish her, until a stewardess noticed that this was the same woman whose picture was in the current edition of the in-flight magazine, attached to a profile of the Pet Shop Boys, for whom she had designed a set.

"Are you Zaha Hadid? " To say she divides opinion is to put it mildly. Over the past decade or so she has gone from being the Architect Who Never Got Anything Built to someone who can't stop building. Writing office for National Geographic's "Explorer in Residence" The 20 Most Beautiful Bookstores in the World. [Editor’s note: In celebration of the holidays, we’re counting down the top 12 Flavorwire features of 2012. 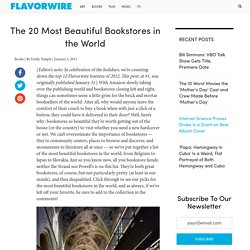 This post, at #1, was originally published January 31.] With Amazon slowly taking over the publishing world and bookstores closing left and right, things can sometimes seem a little grim for the brick and mortar booksellers of the world. After all, why would anyone leave the comfort of their couch to buy a book when with just a click of a button, they could have it delivered to their door? Well, here’s why: bookstores so beautiful they’re worth getting out of the house (or the country) to visit whether you need a new hardcover or not. Towering folly: why architectural education in Britain is in need of repair. Junkitecture and the Jellyfish theatre. 'One man's trash is another's man treasure," says Martin Kaltwasser, screwdriver and saw in hand. 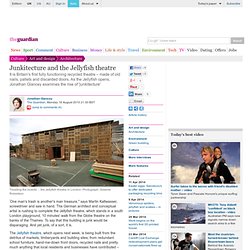 The German architect and conceptual artist is rushing to complete the Jellyfish theatre, which stands in a south London playground, 10 minutes' walk from the Globe theatre on the banks of the Thames. To say that this building is junk would be disparaging. And yet junk, of a sort, it is. The Jellyfish theatre, which opens next week, is being built from the detritus of markets, timberyards and building sites; from redundant school furniture, hand-me-down front doors, recycled nails and pretty much anything that local residents and businesses have contributed – prompted by a public appeal by the Red Room film and theatre company. What should the government's architecture review focus on? Sir Terry Farrell CBE – the world-revered guru of urban design, adviser to the Mayor of London and unlikely conjurer of the "tallest building by a British architect" in China – will undertake an independent review into the UK's architecture policy, it was announced this morning. 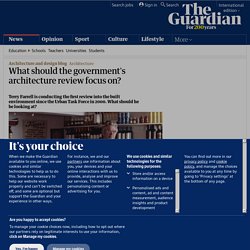 That should come as something of a surprise, given that we don't have an architecture policy. We have policies for planning by the shedload (although perhaps not for much longer), but that is not part of the review's remit. So might this year-long study result in an innovative new piece of legislative guidance – perhaps along the lines of Denmark's architecture policy, introduced in 2007, which serves to both promote Danish architecture abroad, as well as provide a platform for raising standards at home? Somehow, that seems unlikely. Britain's worst buildings of the year - in pictures.