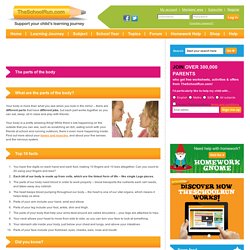 In addition to keeping our cells healthy and clean, our blood also works for our immune system and contains antibodies and white blood cells that fight germs and diseases. Vital organs are the parts of our body that we need to stay alive. These include the heart, brain, lungs, kidneys, liver and pancreas. Our body has symmetry – that means it looks the same on the left side as it does on the right side. The body uses different systems to work properly. Circulatory system – how our blood moves aroundDigestive system – how the food we eat turns into nutrients, fats and waste through our stomach and intestinesMuscular system – how we move around; our muscles allow us to do everything from walking and running to picking things up and laughing at jokes! Movie: Muscular System. Human skeleton. Bird skeleton. Humanskel_bw.GIF (GIF Image, 296 × 485 pixels) The Skeleton Facts. Skeletons When some people think of skeletons, they think of Halloween or some mad scientist's display in a laboratory. 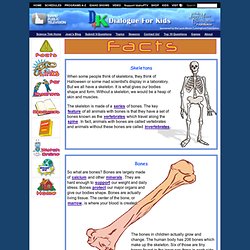 But we all have a skeleton. It is what gives our bodies shape and form. Without a skeleton, we would be a heap of skin and muscles. The skeleton is made of a series of bones. Bones So what are bones? The bones in children actually grow and change. How We Move Our Bones Our bones are not able to move on their own. Tendons do not have any blood vessels and so take a long time to heal if damaged.

Joints Between some of our bones we have joints that allow the body to bend like our elbows and our knees. These special connections between the bones are covered with a plastic-like material that protects the ends of the bones from rubbing together. Skull. Skeleton_elements. The difference between dog bones & human bones. According to Arizona State Museum, “the most common human bones to be mistaken for animal bones are the bones of infants.” 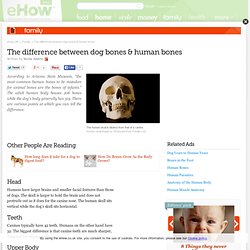 The adult human body houses 206 bones while the dog’s body generally has 319. There are various points at which you can tell the difference. Head Humans have larger brains and smaller facial features than those of dogs. The skull is larger to hold the brain and does not protrude out as it does for the canine nose. Teeth Canines typically have 42 teeth. Upper Body The arms of a human are less robust than the canine’s forelimbs. Lower Body A dog’s spine lacks the curve shown in human spines. 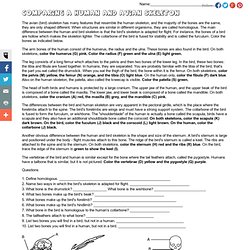 When structures are similar in different organisms, they are called homologous. The main difference between the human and bird skeleton is that the bird's skeleton is adapted for flight. HowStuffWorks "The Frog Skeletons vs. Human Skeletons" As anyone who has dissected one in biology class knows, a frog's internal organs look a lot like what you'd find inside a much larger animal. 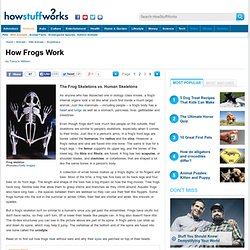 Just like mammals -- including people -- a frog's body has a heart and lungs as well as a stomach, pancreas, liver, gallbladder and intestines. Even though frogs don't look much like people on the outside, their skeletons are similar to people's skeletons, especially when it comes to their limbs. Just like in a person's arms, in a frog's front legs are bones called the humerus, the radius and the ulna. However, a frog's radius and ulna are fused into one bone. The same is true for a frog's legs -- the femur supports its upper leg, and the bones of the lower leg, the tibia and fibula, are fused. A collection of small bones makes up a frog's digits, or its fingers and toes. But a frog's skeleton isn't so similar to a human's once you get past the extremities.