Nature-inspired Fashion Design through The Theory of Biomimicry. Teen liposuction and busty pinatas: narcoaesthetics in Colombia – in pictures. Eating the Sun: Can Humans Be Hacked to Do Photosynthesis? Soylent But humans and plants haven’t shared a common ancestor for hundreds of millions of years. 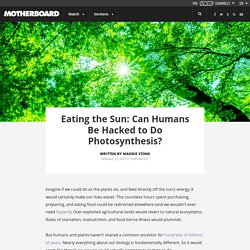 Nearly everything about our biology is fundamentally different. First human head transplant could happen in two years - health - 25 February 2015. Read full article Continue reading page |1|2 A radical plan for transplanting a head onto someone else’s body is set to be announced. 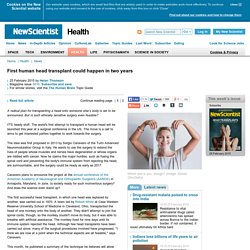 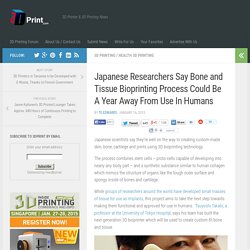 The process combines stem cells – proto-cells capable of developing into nearly any body part – and a synthetic substance similar to human collagen which mimics the structure of organs like the tough outer surface and spongy inside of bones and cartilege. While groups of researchers around the world have developed small masses of tissue for use as implants, this project aims to take the next step towards making them functional and approved for use in humans.

Tsuyoshi Takato, a professor at the University of Tokyo Hospital, says his team has built the next-generation 3D bioprinter which will be used to create custom-fit bone and tissue. The process uses data from a Computer Tomography (CT) scans of a patient which allows the implants to fit correctly and quickly become assimilated by real tissue and other organs in the patient. UnMask. Flash - Japan scientists develop micro-fine adhesive sensors. Scientists in Japan have developed a sticky sheet of tiny sensors that can be put directly on moving joints, beating hearts or other living tissues. 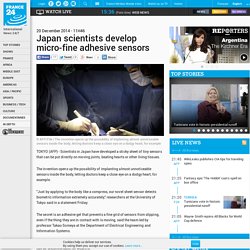 The invention opens up the possibility of implanting almost unnoticeable sensors inside the body, letting doctors keep a close eye on a dodgy heart, for example. "Just by applying to the body like a compress, our novel sheet sensor detects biometric information extremely accurately," researchers at the University of Tokyo said in a statement Friday. Amputee Makes History with APL’s Modular Prosthetic Limb. 'Ghostly presence' created in lab. Wearable Power-Assist Device Goes on Sale in Japan.

Powerwalk energy harvester is being tested by Marines. Marines with 1st Reconnaissance Battalion test out the PowerWalk, just one exhibit of energy saving gear at Camp Pendleton's ExFOB14. 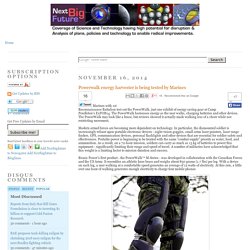 The PowerWalk harnesses energy as the user walks, charging batteries and other devices. The PowerWalk may look like a brace, but reviews showed it actually made walking less of a chore while not restricting movement. Modern armed forces are becoming more dependent on technology. In particular, the dismounted soldier is increasingly reliant upon portable electronic devices - night vision goggles, small arms laser pointers, laser range finders, GPS, communication devices, personal flashlights and other devices that are essential for soldier safety and effectiveness. Dexta Robotics. The first implanted mind-controlled prosthetic arm has restored a patient's sense of touch. Mind-controlled prosthetic limbs that work outside the lab are now a reality, with a Swedish man becoming the first recipient of a fully implanted device in the world. 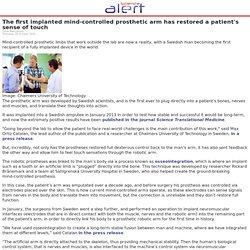 Image: Chalmers University of Technology The prosthetic arm was developed by Swedish scientists, and is the first ever to plug directly into a patient’s bones, nerves and muscles, and translate their thoughts into action. It was implanted into a Swedish amputee in January 2013 in order to test how stable and successful it would be long-term, and now the extremely positive results have been published in the journal Science Translational Medicine. FORTIS Exoskeleton. Les frontières entre l’homme augmenté et l’homme réparé. In China, this wearable air purifier could replace the smog mask.

Health & Wellbeing Smog and other air pollution is still a massive problem in China, damaging residents' health and necessitating the use of the now common smog mask. 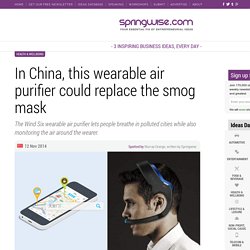 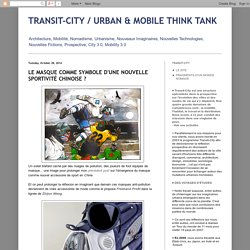 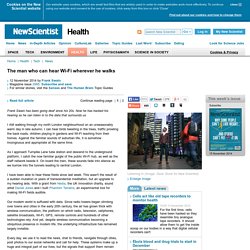 Design Student Creates 3D Printed Shock-absorbing Prosthetic Nose & Scaffold System. One area which has been one of the biggest beneficiaries of 3D printing, has been that of low cost prosthetic devices. 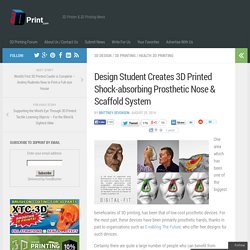 For the most part, these devices have been primarily prosthetic hands, thanks in part to organizations such as E-nabling The Future, who offer free designs for such devices. Certainly there are quite a large number of people who can benefit from affordable prosthetic hands, oftentimes at prices tens of thousands of dollars cheaper than traditional prosthetic devices. With that said, there are other areas of prosthetics which can certainly see tremendous gains, thanks in part to 3D printing. One such area is that of facial implants such as the nose. Ectogenesis: The end of pregnancy and the inevitable rise of the artificial womb. Photo by Xerv_II/Thinkstock Sigmund Freud famously maintained that boys grow up with “castration anxiety,” or the fear of losing their penises, while girls suffer from “penis envy,” or a longing to have penises of their own.

But what if pregnancy envy, not penis envy, has been the central driver of human history? Several years ago, feminist political scientist Jacqueline Stevens offered a fascinating, contrary theory of childhood sexual development that made exactly that point. Human skin cells reprogrammed directly into brain cells. Scientists have described a way to convert human skin cells directly into a specific type of brain cell affected by Huntington's disease, an ultimately fatal neurodegenerative disorder. Unlike other techniques that turn one cell type into another, this new process does not pass through a stem cell phase, avoiding the production of multiple cell types, the study's authors report.

The researchers, at Washington University School of Medicine in St. Louis, demonstrated that these converted cells survived at least six months after injection into the brains of mice and behaved similarly to native cells in the brain. "Not only did these transplanted cells survive in the mouse brain, they showed functional properties similar to those of native cells," said senior author Andrew S. Yoo, PhD, assistant professor of developmental biology. Will You Preserve Your Brain? “The most fundamental assumption on which this thesis depends is that the human mind and its conscious experiences are purely a computational phenomenon… Although in principle there may be some deep flaw in this analogy between a human and a mechanical robot, it is an analogy that rests at the core of all of our research in cognitive science, neuroscience, and even biology itself.”

Bizarre Gadget Makes Music by Scanning an Arm Tattoo. Dmitry Morozov’s tattoo scanner plays sounds that he can alter by moving his arm. Piotr Malecki Dmitry Morozov's tattoo isn't just about looks, it's about sound. The Moscow-based artist has a hefty 8- by 3-inch barcode stretching down his left forearm, and when he scans it with the right gadget: music. Morozov grew up studying guitar and is a self-taught engineer. Swedish woman world's first to give birth after womb transplant. 'Wearable Eyes' Make You Appear Friendly, Social Even When You're Not. Wearable Tech To Help Control Stress. The gift of grip - The Banner. The US military is spending $2.9 million to develop a soft robot suit for soldiers.

Naomi Kizhner's jewellery harvests energy from the human body. The Coming Human Body On A Chip That Will Change How We Make Drugs. Watch: Patagonia And Adidas Toil Away On The Next Big Breakthrough In Clothing. Why the modern bathroom is a wasteful, unhealthy design. The Army's Bioprinted Skin Is Almost Ready to Be Used on Soldiers. Tumblr mxttoj18VA1qaj2cmo1 1280. 25 countries photoshop esther honig to make her beautiful. WATCH: Chinese sperm extractor in all its pumping glory.

The Incredible Challenge of Digitizing the Human Brain. Scientists claim that 'self' can relocate to other bodies, or be made to include a third arm. U.S. Spies See Superhumans, Instant Cities by 2030. The laser-powered bionic eye that gives 576-pixel grayscale vision to the blind.