#3 Post of 2015 – Why Can’t Science Explain Consciousness? It is not uncommon these days to hear something like the following: “Science has explained just about everything else in the world, so it is inevitable that science will explain the mind and consciousness.” 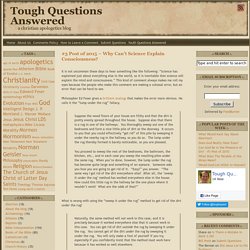 This kind of comment always makes me roll my eyes because the people who make this comment are making a colossal error, but an error that can be hard to see. Philosopher Ed Feser gives a brilliant analogy that makes the error more obvious. He calls it the “lump under the rug” fallacy. Suppose the wood floors of your house are filthy and that the dirt is pretty evenly spread throughout the house.

Suppose also that there is a rug in one of the hallways. Angry Thomas Nagel critics rage on. By Warren Nunn Published: 27 March 2014 (GMT+10) Philosopher Thomas Nagel is under attack for questioning materialism. 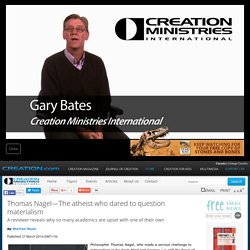 “Materialism is false” – Kurt Gödel. Although Kurt Gödel has not become a household name like Albert Einstein, he was one of the greatest logicians in history, a towering intellectual giant who was also a close companion of Einstein and John von Neumann at the Institute for Advanced Study in Princeton. 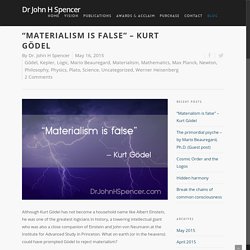 What on earth (or in the heavens) could have prompted Gödel to reject materialism? Materialism, the metaphysical assumption that only physical things are real, has become the unquestioned foundation of so much of mainstream science. Ironically, the fact is that a great many of the pioneers of modern science, from its beginning several centuries ago to the developers of quantum physics such as Max Planck and Werner Heisenberg, thoroughly rejected materialism. As Mario Beauregard clarified in a recent guest blog post, there is no scientific necessity to embrace materialism, and here I will add that there is no logical necessity, either. The Single Best Argument Against Philosophical Materialism? Robert Ritchie, commenting on Wednesday’s post refuting philosophical materialism, raised another important line of argumentation: that we can see that philosophical materialism is false because of “the reliability of our cognitive functions.” 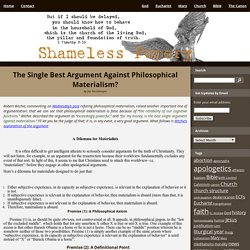 Ritchie described the argument as “exceedingly powerful,” and “for my money, is the best single argument against materialism.” I’ll let you be the judge of that; it is, in any event, a very good argument. What follows is Ritchie’s explanation of the argument: Paranthropology vol 3 no 3. DescartesDualism. The Many Worlds of Logic - Classic Logical Arguments: The Determinist Argument. 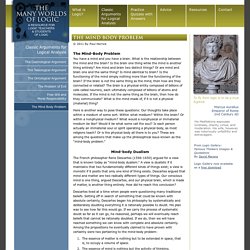 What is the relationship between the mind and the brain? Using Quantum Physics to Explain Human Cognition and Behavior. The theory of quantum mechanics earned its stripes by making accurate predictions concerning the behavior of atoms and the tiny particles that make them up. 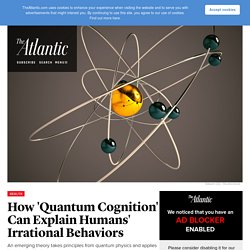 No one quite understands what quantum mechanics means, but it works. That’s its appeal, and so it’s understandable that researchers in other fields might want to borrow the insights of quantum mechanics. Enter “quantum cognition,” a new theory which suggests that the mathematical principles behind quantum mechanics could be used to better understand another notoriously inexplicable area of study: human behavior. “It’s interesting—when we say something is irrational in decision-making, it’s because it’s against what a classical probability-based decision model should predict,” says Zheng Joyce Wang, an associate professor of communication at Ohio State University and a co-author on both papers. Software_and_Mind. John Wheeler - Important Scientists - The Physics of the Universe. He became a professor of physics at Princeton University in 1938, where he remained, with an interruption during World War II, for 38 years until 1976. 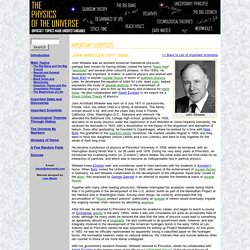 During his very early years at Princeton, he introduced the scattering-matrix (or “S-matrix”), which relates the initial state and the final state for an interaction of particles, and which was to become an indispensable tool in particle physics. He always gave a high priority to teaching, and continued to teach freshman and sophomore physics even after he had achieved fame, believing that the young minds were the most important. He was known for his high-energy lectures, writing rapidly on chalkboards with both hands, and twirling to make eye contact with his students. Among his graduate students were some important theoreticians of the later 20th Century, including Richard Feynman, Kip Thorne and Hugh Everett. The Single Best Argument Against Philosophical Materialism? Moreland J.P. Consciousness and the Existence of God. A theistic argument. Routledge 2008. Philosophy mind dualism metaphysics theism.

Body and Soul Part 2: Why the Soul is Immaterial. By Dr. 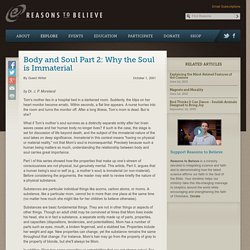 J. P. Moreland Tom's mother lies in a hospital bed in a darkened room. A "Complex" Theory of Consciousness. DO YOU THINK that your newest ac­quisition, a Roomba robotic vacuum cleaner that traces out its unpredictable paths on your living room floor, is conscious? 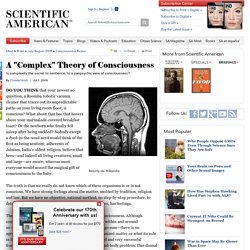 What about that bee that hovers above your marmalade-covered breakfast toast? Or the newborn who finally fell asleep after being suckled? Nobody except a dyed-in-the-wool nerd would think of the first as being sentient; adherents of Jainism, India’s oldest religion, ­believe that bees—and indeed all living creatures, small and large—are aware; whereas most everyone would accord the magical gift of consciousness to the baby. The truth is that we really do not know which of these organisms is or is not conscious. 322_H22.pdf. 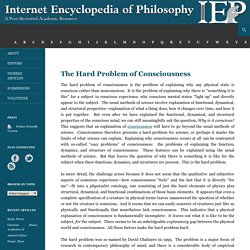 It is the problem of explaining why there is “something it is like” for a subject in conscious experience, why conscious mental states “light up” and directly appear to the subject. The usual methods of science involve explanation of functional, dynamical, and structural properties—explanation of what a thing does, how it changes over time, and how it is put together. But even after we have explained the functional, dynamical, and structural properties of the conscious mind, we can still meaningfully ask the question, Why is it conscious? This suggests that an explanation of consciousness will have to go beyond the usual methods of science. Consciousness therefore presents a hard problem for science, or perhaps it marks the limits of what science can explain.

Searle’s Biological Naturalism and the Argument from Consciousness. In recent years Robert Adams and Richard Swinburne have developed an argument for Gods existence from the reality of mental phenomena. Call this the argument from consciousness (AC). My purpose is to develop and defend AC and to use it as a rival paradigm to critique John Searle’s biological naturalism. Moreland on Consciousness. Noology.pdf.